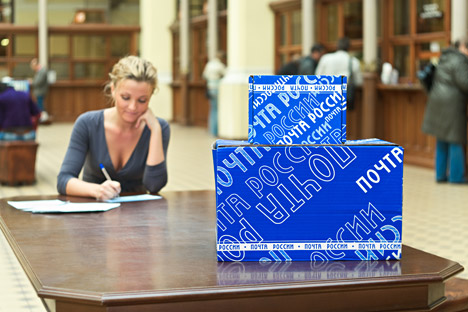 Russia is creating a massive new bank based on the postal system.

Russia’s government approved the establishment of a massive new bank based on the country’s postal service, a move that will eventually create an institution with more retail branches than all other Russian banks combined. The new entity, called Post Bank, is a joint venture between Russian Post and one of the country’s largest lenders, state-owned VTB Bank.

Post Bank is being established in part to provide banking services across Russia’s far-flung, near-empty regions, and to target pensioners. VTB will fuse one of its subsidiaries, Leto Bank, into the new institution. The partners say the new institution will begin giving out loans as early as January 2016, with a pilot project to be launched in Moscow this fall.

Over the next three years, the bank will open outlets in no less than 15,000 Russian Post offices. After this initial rollout, the bank should start operating in all the 42,000 offices of the national operator. The current leader, Sberbank, has more than 17,000 outlets. Once it is completed, Post Bank will have more retail locations than all other Russian banks combined, according to the Russian banking portal Banki.ru.

Post Bank’s Board of Directors will be headed by Russian Communications Minister Nikolai Nikiforov. “The question of the creation of Post Bank has been discussed for 15 years; eventually we came to the conclusion that it would be created in partnership with the VTB Group,” Mr. Nikiforov told reporters at a conference in September.

According to the minister, after the renaming of Leto Bank as Post Bank, VTB will keep 50% plus 1 share of the new entity while the rest will be acquired by Russian Post. VTB will invest 16 billion rubles ($246 million) in Post Bank. In turn, Russian Post will assume the costs for modernizing its post offices to accommodate the banking operations.

“Today only 50% of Russia’s population [over 18 years old] uses banking services. In China the share is 70%, and in Scandinavian counties it’s over 97%. The creation of Post Bank should change this situation”, Leto Bank press service said. “The experience of France, Japan and China proves that a bank project like this is relevant and rather successful. Moreover, Post Bank should decrease the share of cash payments and increase the competition in some areas where only one or two banks operate,” the bank said.

According to VTB chief Andrei Kostin, Post Bank aims to serve as many as 20 million people, half of whom will be pensioners. Post Bank’s loan portfolio will grow to 418 billion rubles ($6.43 billion)over 10 years, and its deposit base will reach 577 billion rubles ($8.87 billion), he said. “Post Bank will offer pension delivery with special cards and accounts. Special deposit and credit services will be available for pensioners,” Leto Bank press service commented.

The main competitive advantage of such a bank is a broad infrastructure and access to the large customer base of Russian Post, whose regional network covers even the smallest and most remote communities of the vast Russian territory, said Dmitry Monastyrshin, the principal analyst at Russia’s Promsvyazbank. According to him, the national operator serves approximately 150 million addressees and has been familiar to the public for many years. “Customer confidence in Russian Post will translate into loyalty to Post Bank,” Monastyrshin said.

The success of the new bank will largely depend on how well it combines banking processes with the work of Russian Post, which is broadly considered to be notorious for inefficiency and poor organization, analysts said.

“The low efficiency of Russian Post is largely due to the low cost of the services, which is important to ensure the availability of post services to the broad public,” said Monastyrshin. However, he said, the use of VTB Bank’s up-to-date banking technologies, coupled with Russian Post’s extensive infrastructure and access to its customer base, should create synergies and ensure the profitability of the new group.

“But for all that, a lot will depend on the new bank’s approach to the formation of the loan portfolio,” Monastyrshin said.

Increased efficiency is a question of time under proper management, said Sergei Deineka, an expert with the BKS Premier bank. “A striking recent example is Sberbank. Even 10-15 years ago, it was considered just as clumsy and ineffective an organization as Russian Post, and was associated exclusively with huge queues by the public,” he said.

“After a total restructuring, the situation has changed dramatically, and now instead of the usual Sberbank, we see quite a modern bank, keeping up with the times.” Mr. Deineka believes that Russian Post can repeat this success.