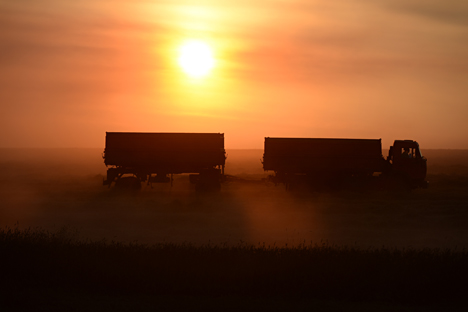 Grain harvesting in the Krasnoyarsk Territory.

The Russian government has decided to significantly increase food exports to countries in the Pacific Rim. At the APEC-2015 Summit in Manila in November, Russian Prime Minister Dmitry Medvedev said that Russian companies would double their grain supplies to Asia-Pacific countries by 2020.

“The increase of economic influence in the Pacific Rim region, particularly with the increase of agricultural exports, is one of Russia's priorities today,” says Petr Samoilenko, an expert at the Russian Institute of Strategic Studies. Food exports will become the foundation on which Russia will strengthen its leverage in the region, he adds.

At the moment, more than a quarter of Russia's foreign trade takes place with the Pacific Rim countries. According to Russia's Federal Statistic Agency (Rosstat), from January to September 2015 Russia's trade turnover with the region was worth slightly less than $100 billion, while its overall foreign trade was worth $403 billion.

"Russia has great potential when it comes to agriculture,” says Pavel Salas, General Director of eToro Russia and CIS. “Over the next few years, agricultural exports to the Pacific Rim countries can indeed double from the present volume, and amount to more than $15 billion by 2020.” This will involve trade with China, India, Bangladesh, Myanmar, Indonesia and other countries that have an evident need for such supplies, he adds.

Currently, in monetary terms, a quarter of Russia's food and agricultural exports consists of cereals. “From an economic viewpoint, exporting grain products such as flour, starch, animal feed and, pasta, is more advantageous for Russia than supplying grain itself," says Svetlana Ivanova, a professor at the Plekhanov Russian University of Economics. Russia could also supply northern and northeastern China with seafood and drinking water, she adds.

Samolienko says clear focus is required when it comes to agricultural exports.  He adds that countries like Vietnam and Indonesia are mainly rice consumers. “Their consumption of other types of grains depends on demand from tourists,” the expert says.

An imminent increase in the number of wealthy people in the Asia-Pacific region will help alter global food consumption patterns, David Dawe, a representative of the Food and Agriculture Organization of the United Nations (FAO), said at a forum in Vladivostok in September.

Dawe added that there is increased demand in Japan and Indonesia for wheat and meat products, and that there is also a growth in demand for farm animal feed across the Asia-Pacific. He also highlighted the region's problems in producing dairy products.

According to FAO statistics, China’s aggregate cereal imports increased by 24 percent in 2014, while its imports of animal feed rose by 70 percent last year. Vietnam and Indonesia also significantly increased imports of cereals and animal feed.

“Eastern Russian regions have a lot of potential in exporting soya, corn and meat,” Dawe said at the Vladivostok conference.

"Russia is ready to help solve the food security problems of developing countries in the Pacific Rim,” Svetlana Ivanova says. She adds that Russia could also cooperate with Asian countries in agricultural projects.

Petr Samoilenko believes that the new ‘Territories of Accelerated Development’ in the Russian Far East could host joint agricultural projects. “Russia could offer concessions on these territories, for aquaculture or fish farms,” he adds.