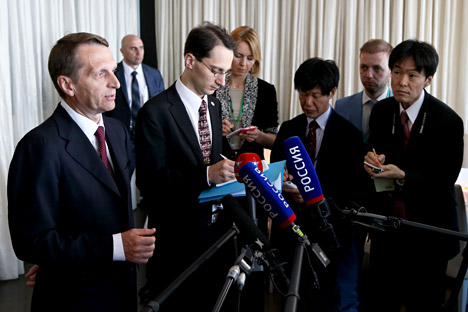 Sergei Naryshkin (left) taking to journalists at the Russian-Japanese Forum on Cooperation in Business, Technology and Culture in Tokyo in 2015.

The volume of trade between Russia and Japan has diminished by almost 30 percent in the first ten months of 2015, Sputnik News cited Russian lower house speaker Sergei Naryshkin as saying.

“In the sphere of trade and economic cooperation, we are going through difficult times,” Naryshkin said during a meeting with Masahiko Komura, vice president of Japan's ruling Liberal Democratic Party, according to the report. “Over the last year, within the first ten months of last year, the volume of trade between our countries reduced significantly, by virtually 30 percent.”

Komura is in Moscow on a three-day visit.