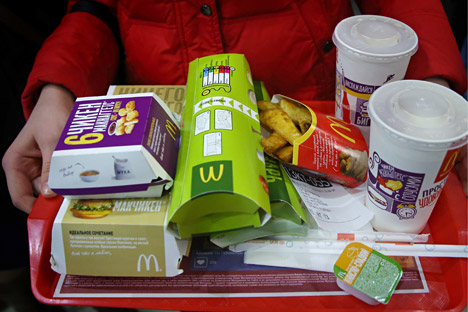 Valery Sharifulin/TASS
The fast food restaurant chain McDonald's managed to increase sales in the fourth quarter of 2015 globally and in Russia due to a change in tactics. Now breakfast in McDonald's can be ordered all day and the more expensive Big Mac has been replaced by chicken wings and double burgers with pork.

McDonald's has published its fourth quarter results for 2015, which was its best year in the last four. Sales for this period showed a five percent increase despite a worldwide decline of income in the restaurant industry by 5.8 percent.

Additionally, the company highlighted its growth in the Russian market. In 2015 McDonald's increased its market share, while sales grew by more than 10 percent. In Russia the company introduced a menu of cheaper snacks to attract the less wealthy, but always hungry, category of teenagers. Now instead of getting a Big Mac for 122 rubles ($1.52) you can buy chicken wings for 118 rubles ($1.47) or a double burger with pork for 105 rubles ($1.31). Also in high demand at Russian outlets are cheeseburgers and cheap breakfast items that can be ordered at any time of day.

The company expects to open approximately 60 new outlets in the next 12 months, with 59 opening in 2015. There are 543 McDonald’s restaurants in Russia.