The Volkonsky Bakery: Bringing Russians back to their roots 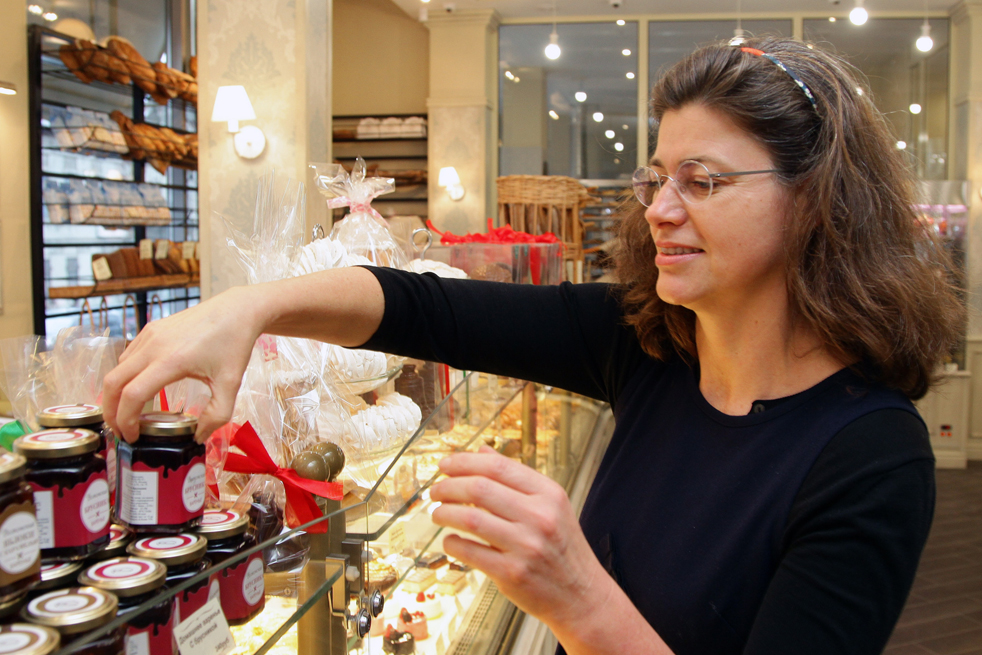 Give Russians access to French quality and watch them rediscover the pleasures of manual labor. This is the mission chosen by Stéphanie Garese, the founder of the Volkonsky Bakery, which has outlets in Russia and Ukraine. In an interview with RBTH, the French businesswoman and mother of six speaks about her business in Russia, her love for the country and her bread.

RBTH: First of all – why Russia?

Stéphanie Garese: Mostly by chance. Back in 1992, when my husband had to choose the place to do his military service abroad as part of a cooperation program, Russia was a country few people wanted to go to. But, for this exact reason, he was more likely to be accepted. I came to the country for the first time in late 1992 and it felt like I finally had found my home. I was 24 at the time. It was a very difficult period for Russia, people were angry, very much so. They were on their toes and they were eager to live a new life. They were looking for signs of change, hungry for novelty. This fascinated me.

The Volkonsky Bakery interior. Source: Antonio FragosoRBTH: You graduated as a lawyer. Why choose bread?

S.G.: I needed my own source of income independent of my husband's. And Moscow had no artisan bakeries in the French sense of the word.

My goal was twofold and it hasn't really changed since: I wanted to give Russians access to the best of French quality products. Westerners who opened businesses in Russia at the time offered only second-rate stuff to the locals, the low-end, and for a very steep price to boot.

The second part of my mission was to increase the value of manual labor and, by making simple skills more attractive and prestigious, to nourish pride that is so inherent to the Russians in a healthy way.

RBTH: And this is why you picked the surname of a Russian noble family for your brand?

S.G.: The permission to use the name was given to us by Princess Volkonsky herself. Her son initially worked with us on the project. Since we were going to launch it in Russia and Ukraine, the Volkonsky family name, which is well known to all generations of people in those two countries, seemed wonderfully appropriate.

The Volkonsky Bakery interior. Source: Antonio FragosoRBTH: Have you had any difficulties?

S.G.: Lots of them, in fact. There are few trades that require a level of initial investment this high. When you venture into baking, you have to immediately put a lot of money on the table to buy the equipment (mixers, ovens, refrigerators, etc.) and get the space needed for work and storage. Besides, the operating costs are fairly high since we need a lot of power to operate the machines.

One of the main problems was related to the particularities of the Russian real estate market. The facilities available in Moscow were far too large and not at all suitable for our needs.

RBTH: Was it difficult to appeal to Russian customers? Did it take long for you to achieve success?

S.G.: Not that long. Russians were used to comparing “their” products to those from the rest of the world and they always thought theirs to be better, and for a good reason since they were only offered low-quality products.

My dream was to make the Russians recognize our products as their own. This was achieved before long. When we opened our second store, a Russian customer called me to congratulate me and tell me that the second store was certainly good, but not as good as the first one, which he called “ours.”

This meant that he spoke about the first one as if as if it was Russian. And it was then that I understood that this was a victory.

The Volkonsky Bakery interior. Source: Antonio FragosoRBTH: Have you taken local tastes into account as you made the menu?

S.G.: Speaking about our baked goods selection, one of our smash hits are little cookies the Russians love to have with their coffee.

I think the taste vocabulary of Russian cuisine is far more open than the Western taste palette. Once you start discovering the sour tastes, various herbs and berries, you really open a very wide range of tastes that are not easy to find in French cuisine.

RBTH: But you still import a part of the ingredients you use.

S.G.: In order to make French bread with a crispy crust, it is essential to use French flour. It is unique not only because of the way it is made, but also because of the cycle of seasons inherent to the climate of France, the way the four seasons are arranged, which creates the ideal conditions for the seeds to grow slowly over 6-7 months.

Russian and Ukrainian flours are richer in protein since the nature gives the cereal plants no more than 2-4 months to grow. Because of the tight deadlines Mother Nature sets, the cereals grow very fast and become very strong. So, as the dough becomes richer in protein, we cannot get the crispness we need for a proper baguette.

About 60 percent of the total volume of flour that our production facilities use comes from France. This takes a heavy toll on our company, especially during the periods such as the one we've just experienced.