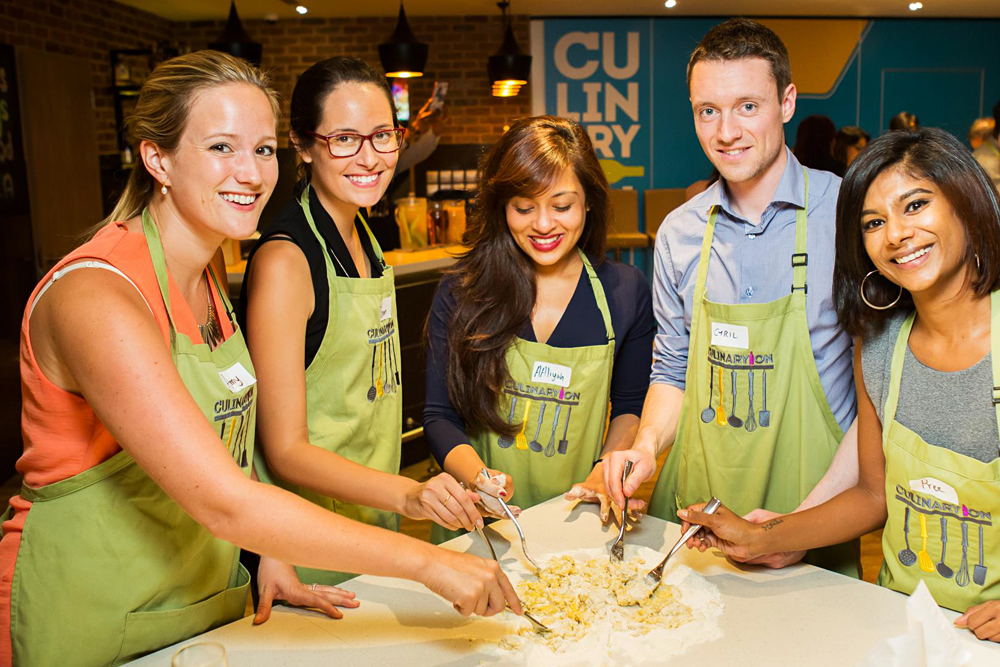 The CulinaryOn project in Singapore.

Press photo
In a compressed internal market, the possibility of foreign currency earnings from exports and foreign operations is attracting more and more Russian companies. RBTH has collected the stories of several Russian businesses who are banking on growth via success abroad.

As Russia's GDP continues to shrink and even local buyers begin to save money on essentials, more and more Russian companies are trying to enter the international market in an attempt to find new ways of growth.

"A lot has changed over the past two years, we can see that the domestic market in Russia has shrunk due to the situation in the economy, so businesses are increasingly trying to sell for export," said Maxim Chereshnev, chairman of the Russian trade and economy development council, told RBTH.

Earlier, it was large Russian brands in the clothing and footwear segments that tried to win foreign customers. Between 2008 and 2014, the shoe store chain Pazolini Carlo, designer brand Kira Plastinina and sportswear and equipment chain Sportmaster all opened stores in the U.S., Europe and China. Now the trend has shifted toward IT services, restaurant business and leisure.

According to Chereshnev, due to the devaluation of the Russian currency against the euro and the U.S. dollar, end products produced in Russia are much cheaper than those produced abroad.

"It is not even so important what to produce – meat, dairy products, medicines, cosmetics or household chemicals," said Roman Tkachuk, a senior analyst at the investment company Okey Broker.

A beauty recipe from Siberia

A cosmetics brand from Siberia – Natura Siberica – is already known in many countries; the company started its international expansion as early as 2012.

"We regularly received a large number of requests; people who have seen our products in Russia or in online stores abroad asked where else they could find them," said Alicia Zelenkova, Natura Siberica's international development project director. "We decided that if there is demand, there should be supply."

The company opened its first boutiques in Hong Kong and Japan; then, in 2015, the brand came to several countries at once – Denmark (own boutique), the U.K., France and Australia – here, the products end up on the shelves of chain stores.

In January 2016, the company launched a monobrand boutique in Spain. Now, foreign businesses in 40 countries give the company a total profit of 12 million euros a year.

The company relies on cosmetic recipes based on Siberian plants, unique for the foreign market, but Russia's "exotic" image is not always an advantage.

"On the one hand, it is of interest to consumers, on the other hand, they are afraid to make the first purchase as cosmetics from Siberia is a novelty for them," said Zelenkova.

In most countries, Russian cosmetics are sold through chain stores; the company uses this scheme in France, Croatia, Slovakia, the U.K. and Australia. Its own boutiques operate only in Hong Kong, Japan, Denmark and Spain.

The company relies on cosmetic recipes based on Siberian plants. Source: Press photo

According to Zelenkova, the investment in opening one store abroad accounts for at least 300,000 euros. However, investments are recovered in the longer run than in Russia, she said. In particular, a boutique in Japan did not pay off in almost three years, and the new outlets in Denmark and Spain will be paid off no earlier than in the next two or three years.

"In Russia we did not spend on advertising, as a matter of principle, but we had to change this approach abroad," Zelenkova said. "In Denmark, for example, six months after the opening of the boutique, we finally decided to hire a PR agency."

The luxury restaurant operator White Rabbit Family announced the launch of a restaurant in Dubai, which will specialize in crab and fish. As the company explained, this niche in Dubai was empty until then.

Almost at the same time, well-known Russian restaurateur Arkady Novikov, who already had experience in Dubai and London, announced plans to open his first restaurant in the United States.

Restaurants are one of the most competitive niches abroad, and few manage to stay afloat, said Russian entrepreneur Alex Blanc.

The Volkonsky Bakery: Bringing Russians back to their roots>>>

In 2015, together with Giulio D’Erme they opened culinary project, CulinaryOn, in Singapore. The project involves master classes hosted by renowned chefs in a big studio, as well as thematic and corporate events. In addition to the fee for participation in the master classes, the studio also earns on extra services – the bar, a ready meal menu for guests and service charges. In the Moscow studio, the average check per person is 7,000 rubles ($90-$100).

Investments in the Singapore project amounted to about $3 million, and the entrepreneur expects to recoup the investment in four years and reach a turnover of $8 million per year. In the future, he also plans to open his studio in the United States.

“In the first four months the studio in Singapore was visited by 5,000 people and 90 master classes were held. The CulinaryOn business model worked thanks to the new trend to think carefully about one's leisure. The priority at the moment is vivid emotions and impressions that are not available at home," said Blanc.

IT exports not only to the U.S.

In contrast to the traditional view, Russian IT companies are trying to enter not only the U.S. market, but also developing countries such as Brazil.

"On the slightest occasion, Brazilians go to the beach – this is their national mental peculiarity, after realizing which we understood why our first attempt to enter the Brazilian market had failed," said Irina Cherepanova, uKit product director from the Russian IT company uCoz.

Three years ago, the company tried to sell its website builder uKit, which demanded a lot of effort from the user, to the Brazilian market.

"It was a product for geeks, you had to poke around it – and it did not find any resonance in the hearts of Brazilians," said Cherepanova.

So the company decided to offer Brazilians a simpler business website builder. The service is free for the first two weeks, then you need to pay or the site ceases to exist.

The company chose the Brazilian market to develop for two main reasons: There is no national product in the website builder segment, while the competition with other foreign players is moderate.

In Brazil, the number of small companies dramatically increased – by 32.2 percent – between 2011 and 2014; they are all are a potential audience for the uKit project.

Both products, uKit and uCoz, are already represented in Romania; uCoz also operates in Spain, Hungary and the Arab countries. There is a plan to promote the website builder in Iran. The company is also planning to export its new tool uKit to English-speaking countries – the United Kingdom, Canada, and possibly Australia.

"It is very important in the IT business to find countries which have a real demand for the product plus paying customers," says Polina Matveyeva, executive director of Camomile Quotient, an EduTech startup.

According to her, the company's tests have shown that there is a huge interest in simulation software for emotional intelligence training in Latin America and India.

Russian companies have been delivering IT services and products to foreign markets for years and even decades, successfully competing with both local and foreign players.

"The main advantage is a strong school of engineering and mathematics and the talents of our technicians," said Max Desyatykh, creative director of Redmadrobot, which develops mobile applications for businesses.

According to Cherepanova, the entry of Russian IT-companies into foreign markets is due not only to an attempt to secure themselves from falling domestic demand, but also to the fact that the players have resources for development.