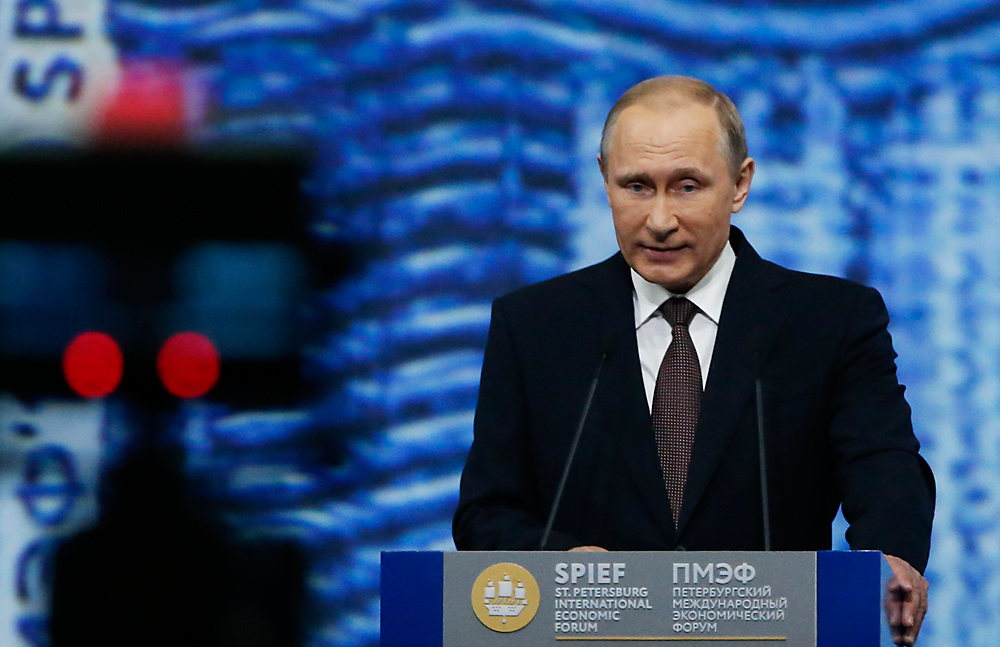 Reuters
Russia is willing to enter into various alliances to counter the actions of countries that are trying to limit the transfer of technologies, president says.

The main direction in the development of Russia's economy will be the introduction of innovations, as well as the attraction of foreign partners, Russian President Vladimir Putin said during the St. Petersburg International Economic Forum, June 17.

The policy will counter the actions of countries that are trying to limit the transfer of technologies, Putin said without specifying which countries.

In 2014, in relation to the Ukrainian crisis, the US and the EU imposed sanctions on Russia that limited the transfer of technologies, including in the fields of hydrocarbon production and the defense industry.

Putin said the key problems in Russia's economy were connected with the global changes influencing the world.

"After the 2008-2009 crisis it was possible to make capital flows transparent and controllable, but accumulated structural problems in the global economy persist and it remains impossible to re-launch growth," Putin told the forum.

It was precisely the exhaustion of former sources of economic growth that geopolitical tension was related to and there was a risk that it could become more severe, he added.

Leading countries were looking for growth sources in the realization of technological potential, primarily in the fields of digital and industrial technologies. Discoveries in these fields could lead to an explosive growth in workforce productivity, the president added.

As a result, Putin believes that competition is becoming more intense in both traditional and new markets.

"We see some countries trying to monopolize the advantages of using new technologies," Putin stressed. Monopolization included the creation of "closely regulated spaces with barriers preventing the flow of technologies to new regions of the world" (one of which is obviously Russia). However, such a policy would not lead to any result: restraining the development of technologies could be done for only a few years, the president said.

Overcoming barriers could be achieved if countries cooperate with each other. "Cooperation can be built within the framework of flexible structures that will encourage a variety of technical decisions," Putin said. The Eurasian Economic Union (EAEU), the largest integration association on the territory of the former USSR, which includes Russia, Kazakhstan, Belarus, Armenia and Kyrgyzstan, was just such an organization, he suggested.

The EAEU is prepared to cooperate with the European Union in the issue of technology transfer. "We see opportunities for uniting with other countries," noted Putin. More than 40 countries and associations had expressed their desire to create a free trade zone with the EAEU.

In the last year alone, Russia had been able to solve many pressing problems in its economy, the president said. In particular, the outflow of capital had been reduced by five times and inflation was also coming down.

Putin remarked that Russia has already been able to increase productivity in the chemical and pharmaceutical industries and this practice must now be spread to other sectors, including those of small and medium business. By 2020 the number of workers in small business should increase by 1.4 million people to 18.4 million.

The production achieved as a result would be exported, said Putin. "Import substitution is an important step for augmenting non-crude export." The Russian president concluded that in such a case Russian companies could be incorporated into global production alliances.