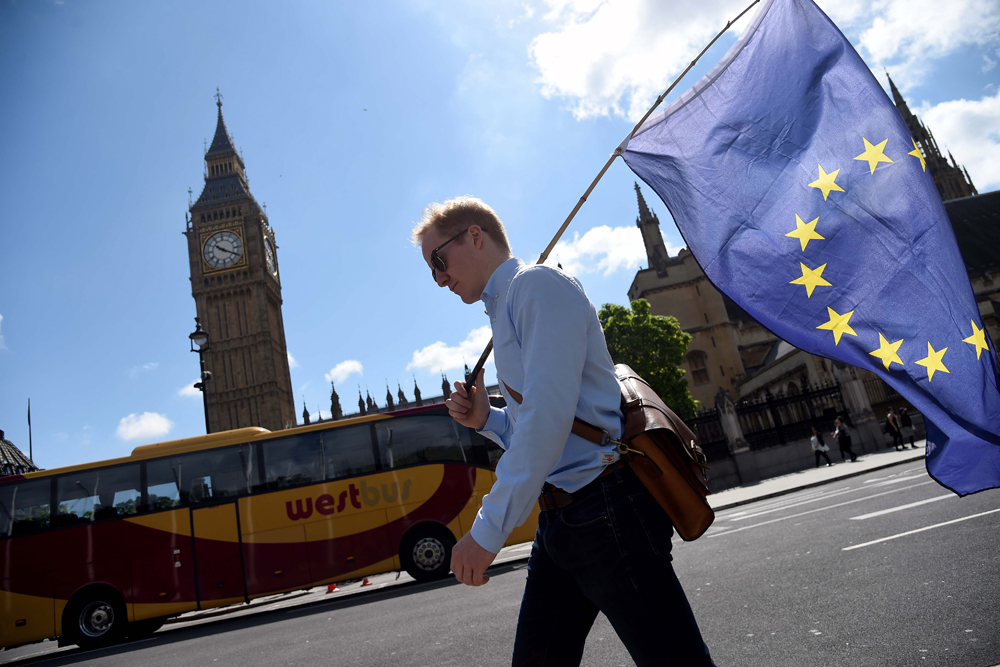 The results of the June 23, 2016 referendum show that the majority of UK citizens (52 percent) decided that it would be better for their country to leave the European Union.

Rex/Fotodom
The United Kingdom’s decision to leave the EU has unexpectedly demonstrated the sturdiness of Russia's economy in relation to global shocks: Thanks to heavy capital outflows in the previous years and Western sanctions the Russian market is now a "paradise for investors."

The events unfolding on the world markets in the wake of the June 23 referendum in the UK – which resulted in a vote to leave the EU – have shown that Russia, along with a small number of other countries, is more immune to international shocks than other players.

"It's a rare case when everything is bad in the world but in Russia this situation has not led to anything negative,” said Alexei Bachurin, chief trader at Renaissance Capital. “Russian state bonds have not fallen and shares are still in the same range, even if they are closer to the lower edge. And the ruble is rather strong.”

Meanwhile, Bloomberg writes that Russia, along with the other developing markets, has become a new "paradise for investors.

According to the Financial Times, in the two days of trading after the Eurosceptics' victory in the Brexit referendum, world capital markets lost $3 trillion, out of which developed markets lost $2.8 trillion. The S&P Global Broad Market Index fell by 6.9 percent after the vote.

This is the heaviest two-day fall since the collapse sparked by the financial crisis in November 2008. The S&P Dow Jones Indices indicates that the result was the 12th-largest collapse in the company's history. In two days the S&P 500 lost almost $1 trillion, a fall that was the third-largest in history in cost equivalent.

On the Moscow Stock Exchange, however, trading on Friday, June 24 opened with the MMVB decreasing by 3.28 percent (to 1856.3 points), but by the end of the day there was a partial recovery, and on Tuesday, June 28 the index began to grow (by the end of trading it had increased by 0.84 percent to 1857.23 points).

Tuesday's growth in the value of Russian securities was also observed on the London Stock Exchange: Lukoil securities grew by 1.25 percent and Novatek’s increased by 1.27 percent.

The same situation occurred on debt markets. The state bond index on the Moscow Stock Exchange grew on June 28 by 0.2 percent and that of corporate bonds by 0.08 percent.

A more pronounced price growth can be seen in sovereign Eurobonds, which grew by an average of 1-1.5 points from June 27-29. In particular, the cost of Russia-23 securities grew from 106.5 to 108.3 percent and the price of Russia-26 securities increased by more than one point, reaching 102.38 percent.

Long-term Eurobonds are also showing growth: The yield on Russia-42 bonds decreased to a two-year minimum of 4.88 percent annually.

The Western sanctions have helped Russia adapt and reduce its dependence on American and European banks, since the country has no access to them, explained Yan Dehn, head of the research department at Ashmore Group.

Analysts at Sberbank CIB agree: "If the market's fluctuations on Friday point to anything, it is primarily to the protective capacities that the Russian market obtained after the beginning of the Ukrainian crisis," said a source from the investment bank.

This is mostly conditioned by the large-scale capital outflow that occurred after the crisis, as well as the weakening dependence on foreign loans. The sanctions regime, which limited investors' interest in Russian assets, partly saved Russia from the current turbulence, explain Sberbank CIB analysts.

And the consequences of Brexit may even be positive for Russia, they believe. For example, the UK's departure could lead to a split among European countries over the sanctions against Russia, meaning they could consequently be softened.

Experts also link the growth of prices of Russian securities to heightened attention from investors, who are trying to take their investments out of British and European assets and place them into more reliable instruments.

"The worry brought about by the UK referendum led to the sale on Monday, June 27 of British and risky assets and investors preferred to invest them in protected instruments," wrote Sberbank CIB analyst Alexander Golynsky in his review on June 28. In particular, according to his observations, investors were actively trading Russian Eurobonds.

"In the current situation developed markets may appear riskier for investment since in the last several years they've demonstrated significant growth. Investors fear that in the event of more shocks in Europe, the markets may substantially decline," said Yaroslav Podsevatkin, head of trading at Aton.

Investors have concentrated mostly on the Eurozone's problems and from this point of view Russia and other developing markets are now more interesting for investment.

Investors' interest in Russia is primarily related to the low cost of assets.

"In 2014 the prices of Russian shares were also low but no one was interested in them because investors did not see any potential in the economy," said Podsevatkin. "Now the economy is recovering, inflation is declining, oil prices are stable and there is the potential that the sanctions will be softened."

Finally, he explained, investors are attracted by the high profitability of Russian shares: "Large foundations and banks are starting to gradually buy Russian securities. This is not a lot of money but it is enough to raise our indices," he said.

Another reason for the stability of the Russian market is oil prices. By midday on June 29 the cost of Brent crude had increased by 0.6 percent to $48.37.

Consequently the ruble strengthened against the euro and dollar (on the Moscow Stock Exchange at 7:00 p.m. Moscow time on June 29 the dollar cost 64.52 rubles, having declined since trading began by 93 kopeks, while the euro was trading at 71.33 rubles).