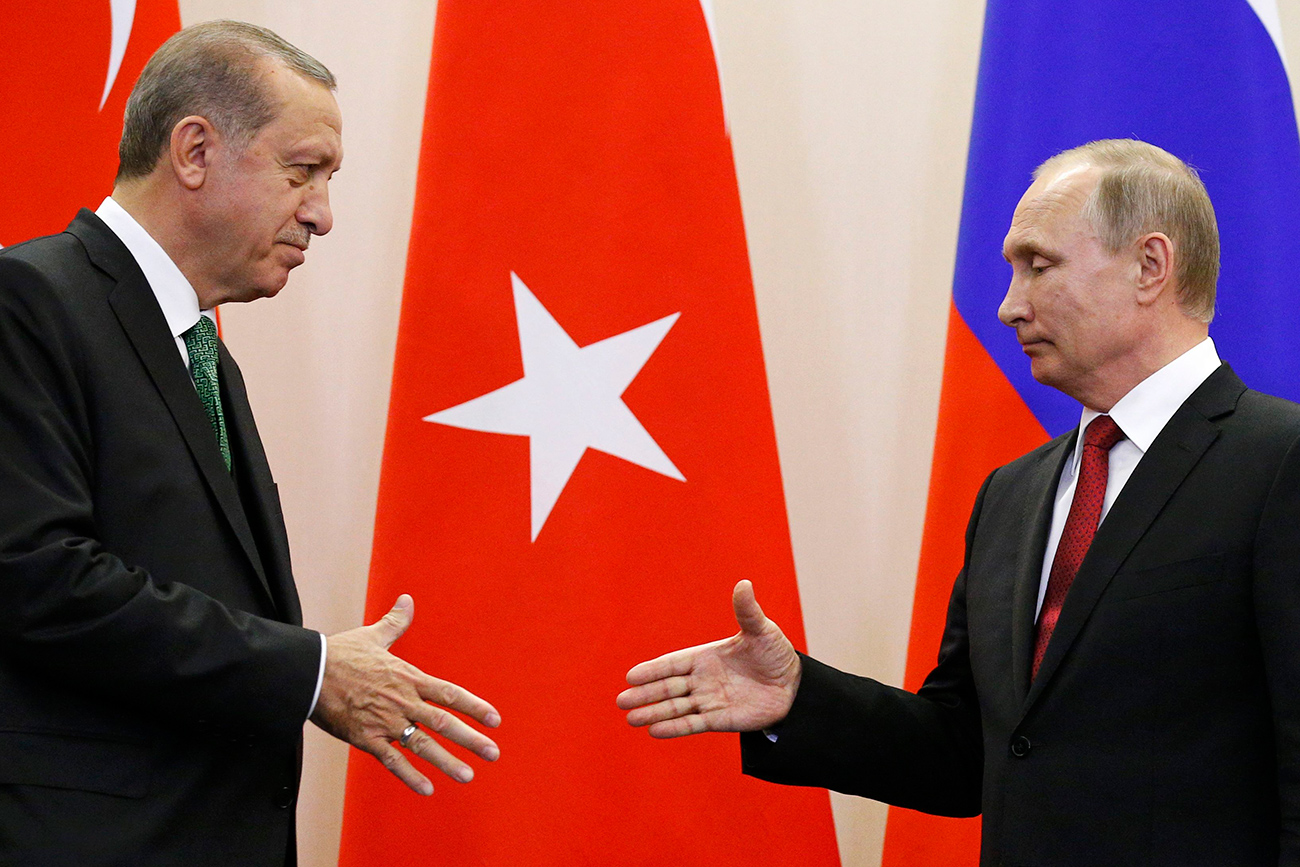 Russian President Vladimir Putin shakes hands with his Turkish counterpart Tayyip Erdogan during a news conference following their talks in Sochi, Russia, May 3, 2017.

Reuters
Russia and Turkey will lift mutual trade restrictions, including those on the supply of grain. However, the Russian embargo on Turkish tomatoes will remain in force.

During talks in Sochi, Russian President Vladimir Putin and Turkish President Recep Erdogan agreed to lift almost the restrictions on bilateral trade between the two countries, reported the TASS news agency on May 3.

"We've agreed on a systematic solution for all the problems related to the restrictions," said Putin. In March, Turkey didn’t allow Russia to export grain, corn, and sunflower meal to the country duty-free, which made agricultural product supplies unprofitable. Russian Agricultural Minister Alexander Tkachev later called this decision a "stab in the back" by the Turkish government.

Moscow hit Ankara with a food embargo after a Turkish fighter downed a Russian Su-24 bomber carrying out a combat mission in Syria in November 2015.

During his meeting with Erdogan, Putin said that the Russian embargo on Turkish tomatoes would remain in force for now, explaining that it’s in the interest of Russian farmers. "Our agricultural producers had taken out large loans and credits. This is a rather long production cycle, which in our climatic conditions is related to the construction of greenhouses and so on," the Russian leader explained.

Turkish business is anxious to return to the Russian market

The tomato embargo may continue for another three to five years, said Russian Deputy Prime Minister Arkady Dvorkovich. "In any case the restriction will remain in force, therefore our producers can be reassured. But separate flexible mechanisms may be introduced when we realize that there’s no damage to us," he added.

Before the introduction of the restrictions, Turkey was the largest supplier of tomatoes to Russia. According to the Russian Federal Customs Service, in 2015 Turkey's share of imported tomatoes was almost 53 percent in monetary value and 54 percent in physical terms.

A joint report prepared by experts from the Gaidar Institute and The Russian Presidential Academy of National Economy and Public Administration (RANEPA) says that the cost of growing tomatoes in Russia is much higher than that of importing them, which negatively affects the Russian consumer.

The cost of Turkish tomatoes is lower because the country has a warmer climate, therefore producers' expenses are less than in Russia, explains Vice President of the Russian Grain Association Alexander Korbut. However, the five-year gap in Turkish tomato exports can indeed improve the positions of Russian greenhouse farms. "In the period that the restrictions will be in place, Russian producers can become competitive and lower production costs, primarily due to the increase of volumes," Korbut adds.

In the opinion of Yakov Lyubovedsky, project director at the Association of Organic Farming, the problem is not cost but the logistics of commercial networks, which do not work well with small domestic suppliers. "In Russia it costs less to grow vegetables than in Turkey. However, the shipping system is oriented towards imports. It's easier for the networks to import vegetables than to collect small quantities from domestic farmers," he says. Moreover, the more expensive production of tomatoes in Turkey is compensated by strong government support, something that Russia's farms still do not receive, believes Lyubovedsky.

Experts are convinced that the quality of Russian products is not worse than that of imported products. "The quality of tomatoes in Russia and Turkey is the same. The countries have the same sorting methods and the same quality of greenhouses," says Korbut.

"From the viewpoint of nutrition, our tomatoes are better: They are more aromatic and tastier. This is due to the open ground and lack of intensive selection," remarks Lyubovedsky. However, Russian tomatoes are not profitable for commercial networks since, because of their quality, their freshness lasts less and they are easily ruined during transportation, he says.​