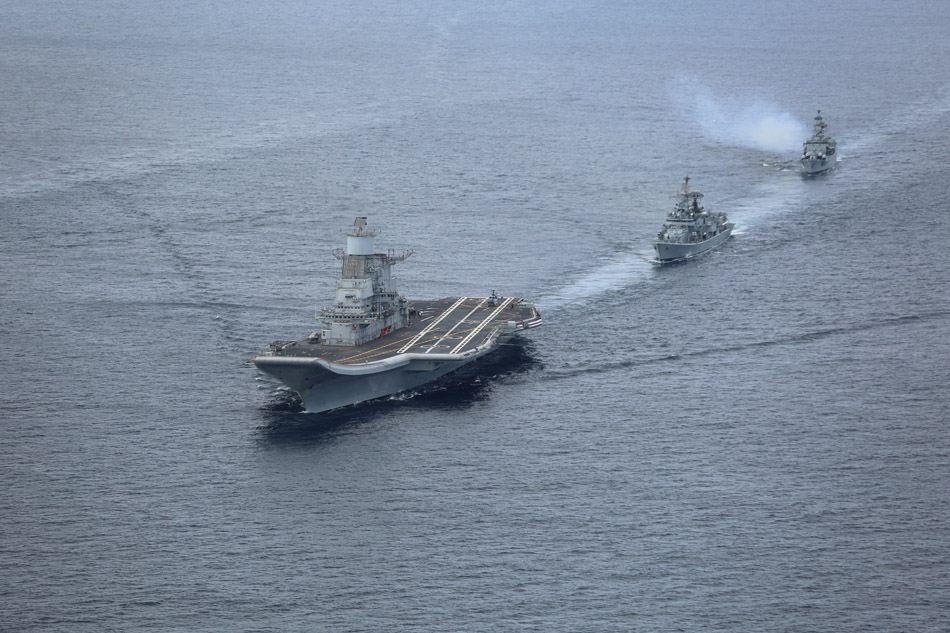 Courtesy: Indian Navy
India, which has ambitious plans to build a blue water navy over the next decade, will not be able to attain its goals without foreign, particularly Russian assistance, Pyotr Topychkanov opines.

India will, over the next decade, face the task of building a modern naval industrial complex, able to implement all the technologies already available to Delhi.

Pyotr Topychkanov, Senior Researcher at the Security Centre of the Institute of World Economy and International Relations RAS, believes modernization of the Indian military-industrial complex, in order to develop the country’s naval forces, is long overdue.

“The Indian naval doctrine and plans for the development of its Navy are greatly outpacing the current development of the country’s defence establishment. As a result, India is forced to depend on suppliers of foreign technologies and on the direct supply of naval armaments,” said Topychkanov.

Modernization of this sector should not only focus on improving the quality and increasing the capacity of the country’s military-industrial complex, but also in reducing the time it takes Indian shipyards to build ships.

There are already good examples in the form of state-owned shipyards Mazagaon Dockyards Ltd. (MDL) and Garden Reach Shipyards (GRSE), which have successfully managed to bring their infrastructures to a new level, and are now able to build a wide range of naval vessels, such as destroyers, frigates, corvettes and submarines.

Topychkanov said theoretically, India could solve this problem on its own, but the big question remains, how much time ultimately will the country need to achieve this task.

“However, such modernization in India will not mean only the development of state-owned enterprises, as plans call for also involving major private companies, such as Larsen & Toubro. Another question is, if India decides to go it alone in this sphere, how much time will be needed, and the results will be unpredictable,” he said.

According to Topychkanov, in earlier years India has shown that it can bring a variety of projects to various levels of completion, but, unfortunately, it cannot be said that even one of these has resulted in unqualified complete success.

“Home-grown technologies, one way or another, cannot satisfy all the needs of India’s armed forces; whether it is the INSAS rifle, the Tejas fighter jet, or the Arihant submarine. All of these are, in fact, unfinished military projects, which, in the final analysis, cannot be brought into serial production,” he believes.

Topychkanov noted that the Indian helicopter manufacturing sector faces the same problems, as do armoured weapons and, indeed, all other sectors involved in the development of military technologies.

“The Indians have been able to master a number of technologies, but this has not led to the emergence of serial production of military equipment,” said Topychkanov.

Thus, he concludes that without foreign assistance, it will be very difficult for India to go down this path. If India is truly interested in upgrading that part of its military-industrial complex that works to fill the needs of the nation’s Navy, it must make efforts to cooperate with a number of other countries.

“First of all, there is Russia, but possible partners are also the United States, France, United Kingdom, European Union, Japan, and Israel,” Topychkanov said. “In many cases, Russian participation is not so visible to external observers as is the work of Western companies operating in this sphere. Nonetheless, based on many agreements with India, we not only supply the country with military equipment, but also transfer technologies to the Indians, so that they can manufacture equipment domestically. Accordingly, working in India today are not only our experts, and not only in an advisory capacity, but also companies from our military-industrial complex,” said Topychkanov.

Russia is already actively working in the Indian defence establishment, but according to Topychkanov, it remains an open question when it comes to Russia’s possible future participation in its modernization, and particularly, when it comes to the industries that supply the needs of the Indian Navy.