In the army now: A matter of honor or a difficult duty? 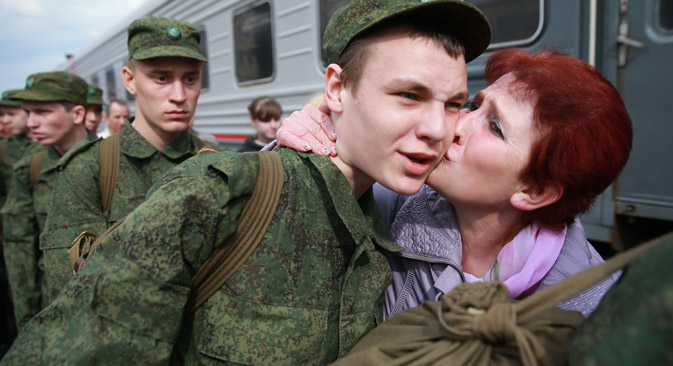 While parents used to try to the bitter end to keep their son from going into the army, now, according to a recent poll, every other respondent wanted their immediate family members to serve. Source: ITAR-TASS

Despite far-reaching reforms to the armed forces in recent years, attitudes toward military service among Russia’s young remain largely negative – though polls suggest that many older Russians do not share this view. What options does the army have to avoid being chronically understaffed in the future?

This is already the second time that the Moscow military registration and enlistment office is searching for my ne’er-do-well nephew so they can give him his army draft notice and call on him to repay his debt to the Fatherland.

The Fatherland doesn’t require too much, just serve for one year in the ranks of the Russian armed forces. However, my nephew, like many other young people, is not ready to sacrifice a year of his life in the name of a debt that he doesn’t understand.

He who gets bad grades goes in the army

The Russian army has a mixed recruiting system: through professional soldiers and through the draft.

Appeal of military life on the rise

The army plans to become completely professionalized in the near future; however, as the armed forces reforms are not complete, conscripts still make up almost half of the personnel in the Russian army.

Every spring and every fall, when the draft starts, hundreds of young people from 18 to 27 who have no valid reasons to avoid mandatory service in the armed forces try to leave home as little as possible so as to not be sent directly to the recruitment station from the street.

“If you get bad grades, you’ll go in the army!” is a warning commonly used by Russian parents to scare their sons into trying harder in school.

Just what is so scary about serving in the army?

Many conscripts fear having to serve in “hot spots”. We all remember Afghanistan and the Chechen wars. Currently, conscripts can’t be sent to war zones, but this remains many people’s greatest fear, explained Alexander Tolmach, research fellow at the Institute of Sociology of the Russian Academy of Sciences.

For the most part, the lack of desire in young Russians to serve in the army is connected to the significant drop in prestige of the military profession at the beginning of the 1990s. The country went through a difficult period of transformation; at the same time, the army as an institution lost its function as an effective social elevator, and service in the army became the destiny of the poorer social classes, and abusive behavior worsened.

Currently, the financial situation of soldiers has improved, the army is getting the newest defense technology, and large-scale training is carried out a few times per year. However, attitudes toward serving in the army among young people are not quite so easy to change.

Contract services not popular among Russian citizens for now - poll

Modern young people have different values. Tolmach says today’s youth are egocentric and serving in the army is a rigid submission to the collective and to corporate military norms.

According to the Russian Ministry of Defense’s Sociological Center’s data, it is not financial incentives but worldview that influence attitudes toward military service. Therefore, if young people’s values do not change in the near future, the Russian armed forces face being chronically understaffed.

Foreign legionaries are not the solution

Perhaps the shortages in personnel could be made up for in the meantime by creating a “foreign legion”?  These military units composed of foreign citizens have long existed in Great Britain and France. In the U.S., foreigners are also allowed to serve in the armed forces, and they are given American citizenship right after their first (three-year) contract expires.

In Russia, foreigners cannot be drafted into the army, but they are not prohibited from professional service. President Vladimir Putin signed the relevant decree in 2003. One need only speak Russian fluently.

However, over the past 10 years, foreigners have not expressed a particular desire to serve for Russia’s benefit. Maybe this is because they cannot make a career out of it. The law prohibits foreigners from holding the higher private and sergeant positions.

According to the Ministry of Defense, only about 300 foreigners are currently serving in the armed forces, and most of them are from CIS countries.

Related: Singing strangers on a train

It is, of course, not possible to create a legion out of 300 men. So it remains only to place hope in our own citizens for the strengthening of the defensive capabilities of the Russian armed forces. Certain polls show that over the past five years, service in the army has become more attractive to Russians.

While parents used to try to the bitter end to keep their son from going into the army, now, according to a February poll by the All-Russian Center for the Study of Public Opinion (VTsIOM), every other respondent (53 percent) wanted their immediate family members to serve.

Four years ago, that figure was only 36 percent. Today, the vast majority of those polled (80 percent) think that men should serve in the army and 42 percent are sure that service in the armed forces is a matter of honor for real men.

150,000 conscripts are being sent to the army this spring. The punishment for dodging the draft is a large monetary fine or up to two years behind bars.