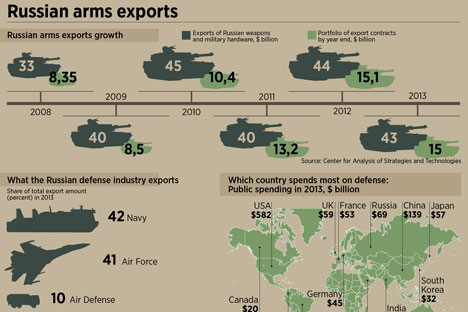 In 2013, Russian signed $49 billion worth of orders for the export of its weapons and military hardware. RBTH looks at the portfolio of orders to see what Russia exports, to whom and how much.

In 2013, "exports of Russian military goods and services rose by 3 percent to exceed $15.7 billion", overtaking the 2012 figures, he said. Putin went on to add that the U.S. accounted for 29 percent of the market; Russia, 27 percent; Germany, 7 percent; China, 6 percent; and France, 5 percent.

Russian military exports went to 65 countries of the world. Furthermore, Russia has agreements on military-technical cooperation with 89 countries.

Based on RIA Novosti and Vzglyad.

Director general of Rosoboronexport on deals with the U.S. and why the company's revenues will not grow much higher: Read more>>>