Pistol-packing for the final frontier: Why were cosmonauts armed? 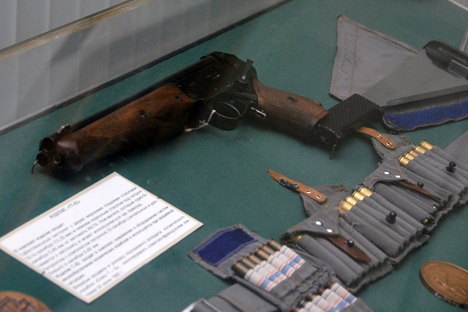 Members of the Soviet cosmonautic corps were equipped with a regular Makarov (PM) gun. Source: wikipedia

It is a little-known fact that cosmonauts were provided with standard-issue firearms when they blasted off into the cosmos. At first these were pistols, but later generations of cosmonauts received triple-barreled guns. Why was it so important for Russia’s space explorers to be able to defend themselves? Alexander Korolkov explains.

Have you ever asked yourself how cosmonauts would defend themselves if they were attacked by aggressive aliens? How do you imagine their weapons? A laser gun? A blaster? A lightsaber? Although the aforementioned weapons come from the realm of fantasy, Soviet cosmonauts indeed used to go into space armed. Their weapon was a three-barrel gun, which resembled a sawed-off shotgun. And more than fighting alien monsters, it was supposed to save their lives upon returning to Earth.

In the USSR no one was supposed to really talk about it, but since the times of Yuri Gagarin Soviet cosmonauts went to space armed. Members of the cosmonautic corps were equipped with a regular Makarov (PM) gun, the same one that policemen used. It was distributed in case the cosmonauts landed in the wilderness on their return to Earth, "for protection against wild animals or criminal elements." And few people thought of replacing the "cosmic" PM until 1965, when cosmonauts Alexei Leonov and Pavel Belyaev had an accident and were forced to land in the taiga.

Because of the difficult terrain, it took a long time for the rescue teams to reach the cosmonauts. Leonov and Belyaev had to spend a few days in the taiga.

"Helicopters could only fly over us and report that someone was chopping down the trees and someone else was using the logs as firewood," Leonov recalled.

The cosmonauts built a shelter and were soon visited by bears, which had just awoken from their winter hibernation and were therefore hungry and aggressive. The only thing that the cosmonauts could do was fire into the air, which only roused the wild animals' curiosity.

"The Makarov was good only for shooting ourselves," Leonov remarks with bitter irony. He was the one who had the idea to create a special weapon for survival in case of forced landing.

A shepherd's and poacher's dream

The three-week development of the weapon was managed by director of the Tula weapons factory, Vladimir Paramov. He proposed a revolver, a semi-automatic smoothbore rifle and a three-barrel-gun. The latter turned out to be most suitable for the objectives: defense from dangerous animals and criminal elements, hunting for food, and firing visible distress signals. The gun was made with two smooth horizontal upper barrels of a .32 hunting caliber and a lower rifling barrel of 5.45 mm caliber. The ammunition that was used was the SP 5 .45 mm bullet, the SP 32 caliber shot and the SP 32 caliber signal shell.

The factory workers called the new gun "the poacher's dream," yet in official documents it is listed as the SONAZ (СОНАЗ - portable emergency firing arm).

Officially the SONAZ became available in 1986. Known as the TP-82 firearm, it went to space that same year aboard a French-Soviet space mission.

The TP-82 had an unusual machete butt. It was a regular machete for chopping wood, but it could be covered by a hard sheath, which was attached to the gun, thus producing a rifle. With the smoothbore barrels it could be used for hunting rabbit, fowl and small game, and with the rifle - elk, boar and other large animals. Its ammunition included 11 SP bullets, 10 SP shots and 5 SP signal shells.

As Nikolai Filatov, deputy director of the department of emergency survival from the Cosmonaut Training Center, attests, the weapon became very reliable. "We poured sand and water inside the gun… no matter what we tested it with, it resisted everything," he said.

He remembers that as soon as the Kazakh shepherds in the vicinity of the Baikonur Cosmodrome heard about the gun, they immediately wanted to barter with the cosmonauts. They offered entire flocks of sheep; one shepherd even offered his wife. Everyone wanted the weapon: pilots, geologists, travellers and hunters. A little later the weapon was cloned into what was known as the Vepr-1 and the Vepr-2.

The TP-82 was available until the end of the 1980s. The official version for its withdrawal from production was that there were already enough models out. According to the unofficial version, the financial problems of the post-perestroika period did not allow the factory to produce such an exotic weapon.

The end of a legend?

Not much is known about the TP-82's post-Soviet fate. In 2007 the media found out that, because the TP-82 ammunition's shelf life had expired, the commander of the 16th expedition to the International Space Station, Yury Malenchenko, was issued with a Makarov pistol before the flight instead.

Massachusetts-based firearms manufacturing company Savage Arms made an analogous version of the TP-82 for NASA astronauts, known as the 24-VS. The Randall Firearms Company, meanwhile, made knives: the Astro 17, whose handle contained a first-aid kit.

It is not clear whether the TP-82 or its analogue are still part of the cosmonaut’s inventory. However, it is known that in 2008 famous American space expert and NASA engineer James Oberg demanded the removal of the Russian firearm from the ISS. He said that he considered it dangerous and that a gun does not belong in orbit, where people work in stressful and psychologically tense conditions.

Russia experts, however, did not agree with Oberg. According to Yury Gidzenko, director of special preparations at the Cosmonaut Training Center, the necessity of having the weapon onboard is proven by flight experiences. So it is probably still too soon to remove the TP-82 from the cosmonaut’s inventory, as well as from the history of space exploration.

Read more: Buran: What happened to the Soviet space shuttle?