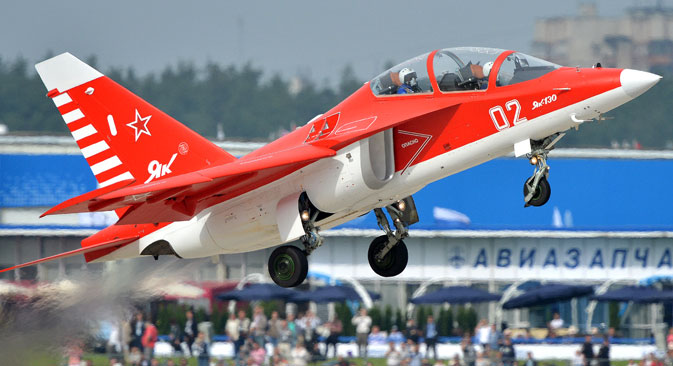 Yak-130 during a demonstration flight at the MAKS-2013 Aviation and Space Salon in Zhukovsky. Source: Ramil Sitdikov / RIA Novosti

The Yakovlev Yak-130 is Russia’s newest trainer aircraft, capable of being programmed to recreate a range of different flight conditions for trainee pilots as well as functioning as a ground-attack craft. Russia now hopes to take advantage of the plane’s export potential.

Within the next two or three years, Moscow intends to present the Yakovlev Yak-130, its newest trainer aircraft, to a wider world market.

In comments made at the recent Farnborough International Airshow outside London, Sergei Kornev, head of the Department for Exports of Aircraft and Special Property at Rosoboronexport, the Russian exporter of armaments and military equipment, described the Yak-130 as not only one of the best trainer aircraft in the world, but also a plane that can act as a light ground-attack aircraft, which Russia’s foreign partners find of particular interest.

The Yak-130 is one of the main hopes of Russian military aviation. Development work on the aircraft began as far back as in the 1980s, and was focused on producing a primary trainer aircraft capable of flight simulation for all types of modern and prospective fighters. However, the collapse of the Soviet Union put an end to the work.

Under the terms of the deal, the Italians were to have provided airborne equipment for the plane and act as agents to sell the aircraft on the world market, with property rights divided 50/50. But in the end the Italians abandoned the aircraft and developed their own, the M-346.

In the Russian army, the Yak-130 is called "the flying iPhone”: It is reliable, easy to manage and, most importantly, highly oriented to a specific customer and their needs.

"I have never seen an aircraft easier to manage and more flexible than this one," said former commander of the Russian Air Force and Hero of Russia Vladimir Mikhailov of the new trainer aircraft after a flight on the Yak-130.

The general was certainly cunning – a training flight is never "easy", and an aircraft is never "flexible." The thing is that, just as with the iPhone, the Yak-130 features technical solutions that make it as user-friendly as possible.

For instance, according to the designers, the aircraft can be reprogrammed directly while in flight to perform a training flight in various weather or pilotage conditions, depending on which aircraft the pilot is being prepared for. If this is the modern Su-30 aircraft, the Yak-130 will fly according to one scenario; if the flight program of the newest American F-35 light fighter is entered, it will fly in a different way.

Moreover, the flight program will be absolutely secure and predictable for both the student and training pilot. If the student pilot loses control of the aircraft, it can be landed by an instructor using radio signals from the ground.

The Yak-130 is able to fly safely at angles of attack of up to 40 degrees with a velocity varying from 125 to 500 miles per hour. There is by no other trainer aircraft today capable of achieving similar functions.

More than a trainer aircraft

However, the Yak-130 can resolve not only training problems. This “flying school desk" can be easily converted into a light fighter or ground-attack aircraft if necessary. The craft has 9 hardpoints – 6 under its wings, 2 on the wingtips and 1 under the fuselage – on which it can carry a weapon load up to 6,600 lbs, including air-to-air and air-to-surface missiles, as well as bombs of 550 lb and 1,100 lb calibers, cluster bombs and other aircraft weaponry.

According to experts from the Russian Air Force, the cost of sending the Yak-130 to perform local tasks, such as the destruction of terrorist camps, border defense (including marine borders) and the fight against drug traffickers is significantly less than if an F-35 or Su-30 were sent on a combat mission.

In addition, since it is practically autonomous, this Yakovlev aircraft can be based anywhere, be it on a concrete airfield with a normal maintenance system or on an unpaved airdrome. This makes it possible to base the aircraft as close to areas of combat operations as possible and to ensure its use in operations in places which are unprepared in respect to aviation.

Until recently, the Yak-13 has not been supplied to foreign customers. Under a contract with the Russian Defense Ministry, the aircraft manufacturer, Irkut Corporation, had first to satisfy the requirements of the Russian military for 70 such planes.

However, the experience of using the Yak-130 in the domestic army has quickly opened up the plane’s export potential for foreign customers. Algeria, which obtained 16 aircraft for its armed forces, became the first buyer of the Yak-130. Later, contracts were signed to supply 36 Yak-130s to Syria, 26 to Bangladesh and four to Belarus.