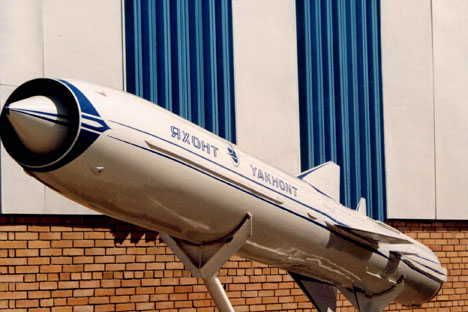 The P-800 Onyx, better known under its export designation of Yakhont. Source: ITAR-TASS

The rocket, the technical characteristics of which remain classified, has passed state testing and will soon enter into the service of Russia’s armed forces. Military experts speculate that it could be a completely new development by Russian designers, as well as a product upgrade based on a rocket already in use such as the Yakhont (“Ruby”).

In September 2014, state testing was completed on Russia’s newest cruise missile, which has been developed by NPO Mashinostroyenia, part of the Tactical Missiles Corporation.

According to the general director of NPO Mashinostroyenia, Alexander Leonov, the new missile was designed for the Russian Navy and, in addition to the completion of state testing of the rocket itself, two sets of ground-based and sea-based missiles have also successfully passed state testing. Nothing is currently known about the name, index, or even any of the tactical and technical characteristics of the new product.

According to Dmitry Kornev, the chief editor of the internet project MilitaryRussia.ru, despite all of the secrecy surrounding the recently tested missile, it is already possible to make some assumptions about the product in question.

“It could be a fundamentally new missile, possibly hypersonic. One should not forget that NPO Mashinostroyenia has been actively working in this area, and it was not too long that ago mockups of the joint Russian-Indian hypersonic rocket BrahMos-II appeared at exhibitions,” Kornev told RBTH.

Also, in Kornev's estimation, this could be about the modernization of a missile already in service. In this case, a new, more accurate control system created using modern components and computational algorithms has probably been installed. It is also possible that the so-called homing device has been replaced," suggested Kornev.

In his opinion, if the missile is an upgraded product, then it is most likely to be based on the P-800 Onyx, better known under its export designation of Yakhont. The best-known of the supersonic missiles produced by NPO for the global market, it served as the model for the development of the joint Russian-Indian BrahMos supersonic missile system and the Bastion coastal missile system.

"The so-called ‘diversified forces’ operational concept, when the fleet's actions are supported not only by aviation but also by a grouping of ground forces, is currently being developed in the Russian Navy,” Dmitry Boltenkov, an independent military expert and one of the authors of the book Russia's New Army, told RBTH.

“Land and sea-based missile systems are playing a big role in the activities of the ‘diversified forces’. They are capable not only of hitting the enemy's ships with accurate strikes but also of destroying its ground targets," he said.

According to Boltenkov, putting the new universal missile system into the service of the military will significantly enhance the power of the Russian Navy. At the same time, both experts noted that even though the facts about the new product are still a secret, it is already possible to presume that the new rocket has the potential for export.

As Boltenkov pointed out, the Soviet coastal missile systems Sopka ("Volcano") and Rubezh ("Borderline") were supplied to more than 10 countries around the world and were used several times in the course of military confrontations, for example, in the Arab-Israeli conflicts.

It is noteworthy that the Vice Admiral of the United States Navy, Michael Connor, voiced concerns about the growing potential of the Russian submarine fleet on the pages of the American publication The Inquisitr.

The reason for his concern was the testing of the Bulava (“Mace”) intercontinental ballistic missile, one of the launches of which was successfully executed in September of this year. Launched from the center of the Arctic Ocean, the newest ICBM overcame several thousand kilometers of distance to successfully hit its target in the Kura testing range in the Far East.