And tanks might fly: The Soviet fascination for airborne armor 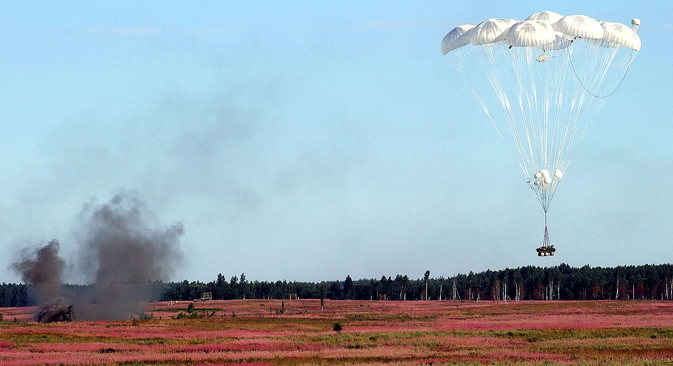 Tanks quickly proved their worth as a modern weapon after their faltering debut on the battlefields of World War I. But the lumbering machines were prone to chassis wear and their slow pace presented a fine target for enemy gunners. While fixing these issues, designers began to dream of winged squadrons of tanks flying into battle and winning wars.

But where there was no infrastructure in place, the Soviet designers concluded that the tank had to slim down and get airborne.

The idea of a lightweight tank that could actually fly originated in the United States. The four-ton M-1932 was a turretless tracked vehicle made of aluminium alloy and was to be fitted with wings and propeller that jettison once it landed in enemy territory.

“A flock of flying tanks set loose on an enemy and any war is brought abruptly to an end,” enthused US tank builder J. Walther Christie, known for his eccentricity but also his genius: Christie pioneered the suspension system that was later developed for the Soviet T-34 tank.

The first Russian tanks: A long and difficult road to the battlefield

But the flying American tank literally never made it off the ground and was abandoned.

The Soviet Union took up the idea but first attempts in 1933 also fell flat. An attempt to air launch the first T-27 tank showed the complexity of the task, since it had to be lightened at the prohibitive expense of combat capability.

A specially designed suspension system was meant to solve the problem and in 1935 designers succeeded in getting the amphibious T-37A tank airborne on a carrier. Residents near Moscow watched in amazement as a huge aircraft swooped on a local lake and dropped the tank into it.

Meanwhile, work continued towards the primary goal of fixing wings to the tank itself. The first draft project was floated for consideration in 1933 but sank as quickly as the tank in the lake.

Soviet industrial capacity of the time could not create a sufficiently powerful engine to reach take-off velocity. But the idea was rekindled with the outbreak of World War II, when a glider was designed to launch with the T-60 tank from under the belly of a bomber.

The tank-glider combination was supposed to detach, fly over the front line and land directly behind the enemy or near guerrilla units. The glider jettisons and the tank goes into battle.

Limited aircraft lifting capacity again thwarted the idea, and and the glider and tank rose only 40 metres into the air.

Still the concept of the airborne tank refused to rest. Soviet designers began tinkering again after 1945 and soon outpaced comparable work by other countries.

In the early 1950s they created the ASU-57 self-propelled gun which could be dropped by parachute and airframe by the new more powerful AN-8 and AN-12 aircraft.

The Soviet project was so successful that the US countered in 1968 with the M551 Sheridan armored reconnaissance airborne assault vehicle, which had similar lines.

But Moscow stayed ahead and in 1975 launched production of the first fully amphibious tank at the Volgograd plant.

With a three-man crew and weighing 17 tons, the tank was armed with a 100 mm cannon, machine-guns and anti-aircraft missile system. But its chief strength was its ability to operate in water and offer ground support to paratroops on almost any terrain.

A second development was also put forward by the Kurgan plant, and together the classified projects were conspiratorial code named Object 934 and 685.

The machines were fully tested but never entered service due to funding shortages that sapped the Soviet military-industrial complex during the perestroika years.

But the projects essentially pioneered the concept of light-weight, rapid reaction light tanks that Western armies began to field in the years after.