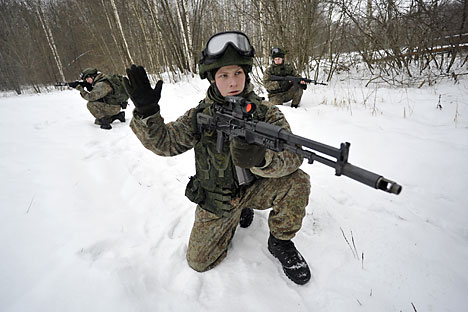 Development of Ratnik-2 outfit will take over a decade to complete. Source: Photoshot/Vostock-Photo

The new Ratnik combat gear has not even entered service with the Russian Army, and manufacturers are already talking about developing a second-generation version of the outfit to improve the combat capability of Russian infantry. The development of new weapons will also entail the development of a new automatic rifle.

Russian arms manufacturers have unveiled plans to create a second-generation version of the Ratnik-2 (‘Warrior-2’) combat gear, for which new rifles with a larger caliber than those currently in service will be developed.

According to the head of the Foundation for Advanced Studies, Andrei Grigoryev, the original Ratnik combat gear is currently being tested by the army, and in December 2014 it should start to be used by the Russian armed forces. It provides soldiers with all the necessary equipment for survival and the conduct of a successful battle – ranging from a bullet-proof vest to a water filter, night vision devices, and the latest navigation aids: in all, a total of about 40 pieces of equipment.

According to TsNIITochMash, the company developing the Ratnik, the annual volume of purchases of military equipment is 50,000 units per year.

However, the big question that still remains is which automatic rifle soldiers will choose for the Ratnik – the Kalashnikov from the AK-12 group or the Degtyarev AEK-971. Both machine-guns have their advantages – the “Kalash” is simple and provides hands-on operation, while the Kovrovsky AEK offers greater accuracy and less recoil.

Second generation is on the way

While the military is selecting rifles for the first-generation combat gear, domestic developers aren’t resting on their laurels. Last week, the head of the Foundation for Advanced Studies, Andrei Grigoryev, said that a project is already underway to develop cutting-edge high-precision weapons as part of a second-generation combat outfit under the working title of Ratnik-2. According to Rossiyskaya Gazeta, a high-quality new rifle is being developed with a brand new larger caliber cartridge.

However, according to some military experts, releasing information on the Ratnik-2 is jumping the gun, so to speak. Chief Editor of Natsionalnaya Oborona (National Defense) magazine and independent military expert Igor Korotchenko told RBTH in an interview that he considered reports of an increased caliber automatic rifle for the Ratnik-2 combat gear premature. “At the moment we can only talk about 5.45 and 7.62 mm caliber guns,” he said.

According to a military source familiar with the situation, in modern combat the most important factor is the amount of ammunition a soldier can carry, which will see an inevitable increase in weight in correlation to an increase in caliber, affecting a soldier’s mobility.

Also, changing the gear’s ammunition and entire rifle system will be quite expensive from an economical standpoint, and will take at least a decade to complete. “Different calibers have already been experimented with a lot, but all new weapons are already developed according to the existing cartridge calibers, and this is to a certain degree due to a sort of inertia, which is characteristic of the military industry,” explained the source to RBTH.

Dmitry Semizorov, the general director of Ratnik manufacturer TsNIITochMash, reported in June 2014 at the Eurosatory International Exhibition in Paris that “... a multi-caliber system will not be developed for the new Russian combat gear.” This means that in 15 years the Russian army will have only single-caliber ammo, but what kind it will be has yet to be reported.

The question remains open, and the designers will have the last word. Russia has already developed the heavy-caliber DB-12 automatic rifle, which uses the same (different versions) 12.7x55 caliber ammunition used in the large-caliber Vykhlop (‘Exhaust’) sniper rifle. Another possibility is the Tula-made OTs-14 Groza (‘Storm’) automatic, which uses 9x39 cartridges.

Read more: The Shilka air defense system: Half a century guarding the skies