Designers to start work on new Russian destroyer in 2015 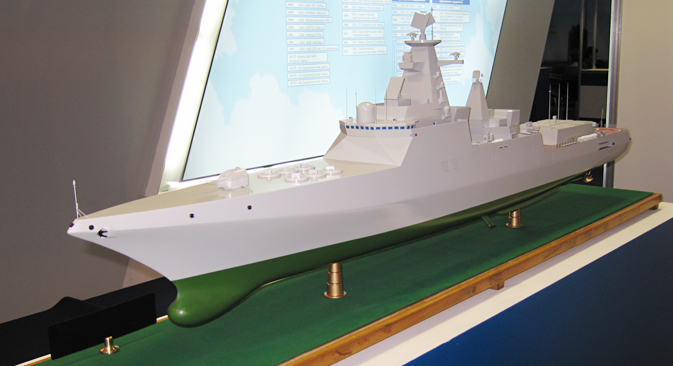 Work on the design of the “Leader” is scheduled to begin in 2015. Source: Vladimir Scherbakov

Russia’s new future destroyer will enter the design stages in 2015. The lead ship, the chief military purpose of which is to establish supremacy on the open sea, will become operative no sooner than 2025. It is presumed that the destroyer will be equipped with the Caliber cruise missile system and the Prometheus ZRK (anti-aircraft surface-to-air missile system).

The Russian Ministry of Defense has confirmed the specifications for the design of a new destroyer, according to a report by news agency ITAR-TASS on Oct. 21, referencing a highly placed source in the domestic defense industry. The program for the creation of the vessel has been assigned the codename of “Leader.”

Work on the Russian “lord of the seas” has been entrusted to the Northern Design Bureau, the creator of practically all of the major surface warships in the Russian fleet. Work on the design of the “Leader” is scheduled to begin in 2015, but the construction of the first of the series of 12 ships – half a dozen for the Northern and Pacific fleets – is not expected before 2023-2025.

However, five years ago the fleet command confirmed that the construction of the destroyer would commence in 2012, while two years ago representatives of the United Shipbuilding Corporation mentioned 2016. 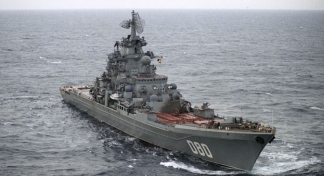 Of particular interest is the fact that the “Leader” program is said not to have been included in the state armaments program for 2020 and funds for the construction of destroyers may only be allocated within the framework of a shipbuilding program planned until 2050.

“The decision to change the date for the creation of ‘Leader’-type destroyers to 2023-2025 was completely justified,” the independent military and naval expert Alexander Mozgovoi explained to RBTH.

“First of all, the Russian shipbuilding industry simply cannot build such ships at the moment. Secondly, immense sums of money are needed to implement the program, but this money can currently be put to great use in other areas. Thirdly, some of the armaments systems meant for the ‘Leaders’ simply do not exist yet. They only exist on paper.”

It is believed that the main attack method for the “Leader” will be the Caliber integrated missile system which is exported under the name “Klub” and includes 3M-14 anti-ship and cruise missiles. These are designed for the destruction of important targets at great distances deep in enemy territory and have been called upon to serve as the “long arm” of the destroyer.

In addition, the Caliber has anti-submarine missiles that make it possible to destroy various enemy submarines with great efficiency, including silent non-nuclear subs.

The destroyer’s second “long arm” may be the Onyx strike system with supersonic cruise missiles. Moreover, both the Caliber and the Onyx can be used from the same launching unit. This gives Russian warships full versatility and real multi-tasking capabilities.

A version of the unique S-500 Prometheus anti-aircraft missile system meant for ships will guarantee protection from air attacks. It is even capable of destroying targets located in nearby sectors of outer space. The ship will also get medium and close-range air and missile defense systems.

In addition, artillery and mine-torpedo equipment – used for fighting saboteurs, helicopters, and drones – will be installed on the “Leader”, as well as modern radar and sonar which will allow the destroyer’s crew to detect any air, water surface, or underwater targets, even small or inconspicuous ones, at distances of tens, even hundreds of kilometers.

However, the precise nature of the armaments to be carried by the “Leader” is not yet known - there are weapons systems still in the development stage which will only be available for use in the fleet after several years. In particular, the then-First Deputy Defense Minister Vladimir Popovkin spoke in spring 2011 of work on the creation of the Zircon-S ship-based hypersonic missile system.

The most disputed issue in the “Leader” program is related to the choice of the destroyer’s main energy supply. So, according to the information published, the Ministry of Defense has ordered work on drafts for two options for the main energy supply – gas turbine and nuclear.

Upgrade of Russia’s strategic potential will be completed by 2020

“At the R&D stage, the ministry will conclusively determine which is more appropriate, a nuclear or conventional destroyer, or whether it should be both. The latter option is totally possible,” a highly-placed source in the Russian military-industrial complex told the ITAR- TASS news agency.

Yet questions remain, especially financial ones. Considering the current capacities of domestic shipbuilding, today’s complicated financial and economic situation, and fact that the surface water strength of the Russian fleet requires large-scale and rapid upgrading, does the Ministry of Defense think – even hypothetically – that it can allow itself the construction of destroyers with two types of power-generation units? Or even in midget batches – six nuclear and six gas turbine ships?

“Resuming a permanent presence on the world’s oceans should not be making a hole in the Russian budget,” the executive editor of the Independent Military Review, Oleg Vladykin, told RBTH.