Secret new Russian tank could be deployed to Arctic zones 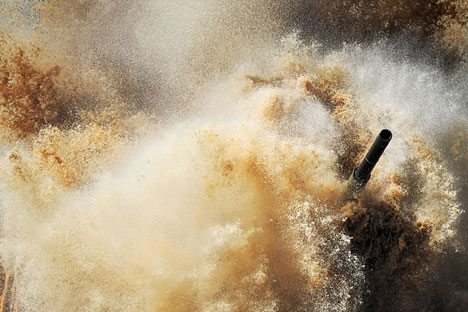 The advanced Armata tank will be equipped with a special blend of steel resistant to extremely low temperatures. The Russian Defense Ministry has not openly declared its intention to locate the tanks in the Arctic, though with competition for the area’s mineral resources heating up, Russia has a clear interest in developing a military presence there.

Russia is working on the development of a secret tank specially designed for use in extremely low temperatures. Named “Armata,” the tank (to be presented to the general public at the Victory Day parade on May 9, 2015) will be equipped with 44S-SV-SH armor. As Yevgeny Chistyakov, a representative of the Steel Scientific Research Institute enterprise, the company that is developing the material, announced at the Interpolitech 2014 exhibition in Moscow, the new armor does not lose its qualities and can be used in Arctic temperatures.

Tanks in the Arctic?

Chistyakov’s announcement demonstrates that Russia is considering the use of heavy armor in the Arctic, where it is currently forming a military group of armed forces. The Arctic may become a bone of contention between the major powers over the energy hydrocarbon resources located under the melting ice. Russia is already claiming its rights to a significant share of these resources, and is constantly increasing its military presence in the region.

As previously reported by the commander of Russia’s land-based forces, Colonel General Alexander Postnikov, the technical blueprint for the Arctic brigades for the near future is based on the MT-TWT multi-purpose armored transporter-tractor. In the future this will become the combat platform for a family of combat and support vehicles based on a two-tier armored tracked integrated platform.

Officially, the Ministry of Defense is not speaking about the creation of a mechanized brigade in the Arctic. The nearest Russian motor rifle division is located in the city of Pechenga in the Murmansk Region. Nonetheless, the military command must consider the hypothetical possibility of utilising any equipment in the zone of its interests, of which the Arctic is today such an area.

When talking about the deployment and combat operations with the use of armored vehicles in critically low temperatures, it is important to consider the experience of Soviet troops. Although it struggled badly in the Winter War against Finland and the early phases of the Nazi invasion during the Second World War, by the concluding stages of the war the Soviet army was successfully operating against German forces on the territories of Finland and Norway.

As Alexei Khlopotov, an independent military expert in the field of land armaments, has noted, Russian tanks proved to be superior back in the Second World War in Northern Norway during the Petsamo-Kirkenes operation.

In these areas, the temperature drops to minus 40 degrees Fahrenheit. According to the expert, in Soviet times, tank trial runs were often held outside of Murmansk, Russia’s port city located above the Arctic Circle.

The planned advantage of the new Armata tank is its lightweight armor. The developers have managed to increase the hardness of the steel while retaining its plasticity. This combination allows the thickness of the armor plate to be reduced by 15 percent without compromising its protective features. It is also planned to use the new material to upgrade existing military hardware. As reported by the Steel Scientific Research Institute enterprise, the new steel blend offers a high level of protection due to its fine-grained structure, optimized alloying process and special heat treatment.

The purpose of the new armor is to protect fighting modules, optoelectronic devices and the tank’s external hardware from small-arms fire and shells from automatic guns.

“Improving the quality of alloying steel decreases friability, which is important for equipment operating in the zones of low temperatures,” says Mikhail Timoshenko, an independent military expert and author of the book The Russian Army.

Yet the innovativeness of the “tank of the future” does not make it immune to the possible challenges of extremely cold regions. For example, Armata’s software may become at risk in low temperature zones. It is also necessary to consider the efficiency of heavy armor in terms of temperature, as well as the resistance of the electronics to atmospheric corrosion.

“Therefore, despite the super-steel, the electronic ‘filling’ may encounter problems. But then again, one should be aware of the actual characteristics and capabilities of the radio-electronic filling of armored vehicles, which is abundant in modern models,” independent military expert Vasily Ponyatov told RBTH.

Ponyatov explained that all military radio-electronic equipment has a designated temperature range for use (for example, from minus 40 degrees Fahrenheit to plus 104 degrees). “In the case of the Arctic, the low temperature limit will be pushed further down as well as the corresponding military acceptance of electronic components and the final electronic device itself,” he said.