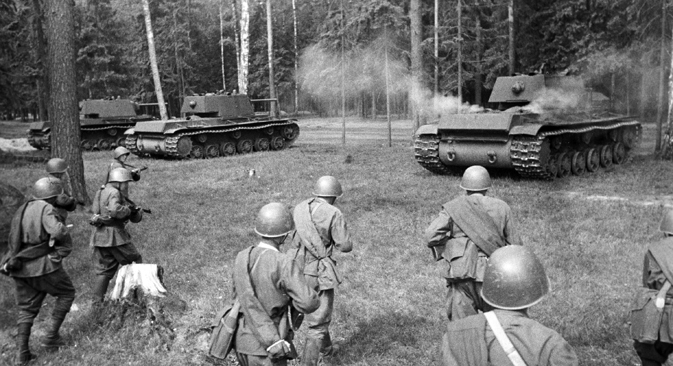 Traditionally only Russian ships and aircraft were named after prominent figures, though small arms also bore their inventor’s name. But two Soviet tanks are enshrined in military history not under the customary ‘T-’ prefix but with people’s initials: the KV (Kliment Voroshilov) and the IS (Joseph Stalin). In this second part of the story of the Soviet KV battle tank, we look at how over its long years of service, the KV went from star player to standard asset before transitioning to the somewhat eccentric yet honored old guard.

The hastily created KV underwent further developments after the start of World War II. Steel panels added to the turret increased its armor thickness to 120 mm, but pushed the tank’s overall mass to 50 tons. This adversely affected maneuverability and suspension reliability, and eventually the change was reversed.

Turrets with thicker welded armor plates were then produced, while alterations were also made to the tank’s armament. In Fall 1941, the KV-1 carried the L-11 and F-32 (34) cannons, but these were then replaced with the more reliable ZIS-5, which was the same caliber, but had a longer barrel.

In the early stages of World War II, the German forces were startled by the KV’s resilience to fire. The tank could only be breached with any certainty with a shell from a Flak-36 88-mm anti-aircraft gun, and Soviet battle accounts chronicle the KV’s valiant performance against German armor and artillery.

“I see fountains of earth as I look through the periscope,” Soviet tank officer Gregory Penezhko wrote of one engagement. “Whichever way I turn I see German tanks, having taken us in a semicircle from north to south.” 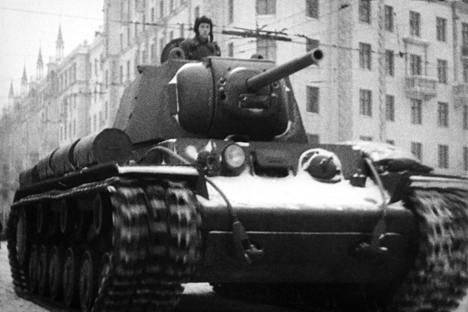 “Sparks are showering off the turret and sides of the commander’s tanks as shell after shell hits but glances off. One German tank stood in the way of Vasiliyev, who instead of wasting a round simply rammed the enemy machine, knocking the turret clean off.”

“Vasilyev’s tank sets off forward again, and the colonel opens the hatch and pokes out his head, using flags to give us orders. Suddenly sparks belch from both the left and right side of the turret, the tank loses speed and stops, flames bursting from the open hatch.”

But the KV also made short work of the German armor. In one battle, a squadron of Soviet tanks under the ace Zinovii Kolobanov knocked out a total of 43 enemy tanks.

Kolobanov placed five KV-1s so that they could fire down the narrow road through a village while concealing themselves behind the houses. The Soviets let the enemy scouts pass and waited until an entire column of Panzer IIs and IIIs appeared before them, knocking out the first and last vehicles to immobilize the remaining tanks. 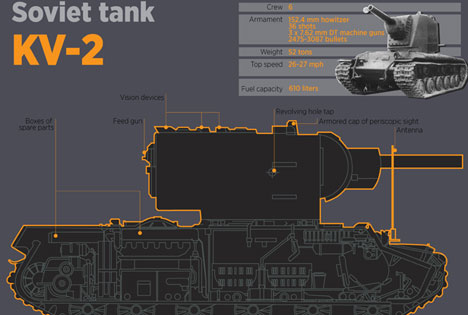 The German crews were shot down by Soviet machine-gunners as they scrambled from what would soon be charred wrecks of their Panzers. Kolobanov’s crew alone is credited with destroying 22 enemy tanks.

By Fall 1941, the Flak-36 was issued with special sub-caliber ammunition, which enabled its use against heavy Soviet tanks in addition to its anti-aircraft role. After the Battle of Moscow, Soviet tank warfare strategist Mikhail Katukov recalls seeing the instruction “Shoot only at the KV” scrawled on captured guns.

The efforts of the German forces to destroy the heavy tanks were also reflected in the reward for a successful kill: German soldiers received eight days leave for a T-34 and up to 14 for a KV.

The KV’s reputation of invincibility lasted until December 1941, when Hitler ordered the use of the hitherto secret rocket-boosted shells after the start of the counteroffensive outside Moscow.

After the KV became as vulnerable as the T-34, criticism was heaped on its failings, including its unreliable transmission, poor maneuverability, low speed and excessive weight.

There were hitches of a non-technical nature, too. The Soviet Union had plenty of tanks, but not enough trained crews. Even after universal education was introduced in 1930, it was unrealistic to expect much technical expertise among fighting forces that had been recently drafted from the farm.

The majority of Soviet crewmen had never driven a car before they were called up, let alone a tractor or a tank. The battle report of the 8th Mechanized Corps from 22nd to 26th June 1941 reports: “Most KV and T-34 drivers have had three to five hours of practical experience,” adding that cohesive tactical ability was seldom observed above the company or battalion level.

As a result, many KV breakdowns and losses were not due to any technical fault of the vehicle, but rather to crew incompetence.

The variety of tanks in service also did not help matters. As a commander of one tank training tank battalion wrote: “The difficulty was that while driving on roads, the medium and light tanks went at approximately the same speed, but when travelling off-road, the light tanks quickly lagged behind. So did the heavy tanks, and worse still, bridges often collapsed beneath them, bringing everything to a halt.”

The report continued: “Usually only the T-34s could fight mobile battles because the light tanks couldn’t manage the enemy tanks and the heavy KV remained in the rear. Moreover, coordinating a mixed compliment of tanks in battle is difficult because the KV, T-34 and T-60 all have different types of radios.”

With time, the KV-1 became lighter and more practicable, but in terms of firepower and protection, it did not differ from the medium tanks. Meanwhile, there was little sense in continuing production of the more heavily armed KV-2.

A transitional model was developed and named the KV-1S; the “S” stood for “speed.”

An 85-mm gun was later fitted with a turret from the new IS-1 heavy tank to produce the KV-85. At the time of its launch in August 1943, however, the KV-85 was far inferior to the German heavy tanks.

Nevertheless, until the introduction of the IS-1, the new KV was the only Soviet tank capable of fighting heavy German armor at up to 1,000 meters. And after the Battle of Moscow, the KV was still the pride of the Soviet leadership. In 1942, Stalin ordered the transfer of one KV-1 to both Britain and the United States so that the steel beast could be admired abroad too.

This hulking veteran of the heaviest fighting of World War II still awaits visitors to the Tank Museum at Bovington and the U.S. Army Ordnance Museum in Richmond, Virginia.

The KV-1 and KV-1S are also on display at the Kubinka Tank Museum outside Moscow, while the last surviving KV-2 in the world stands at the Central Armed Forces Museum in Moscow.