Hats off to the Russian helmet 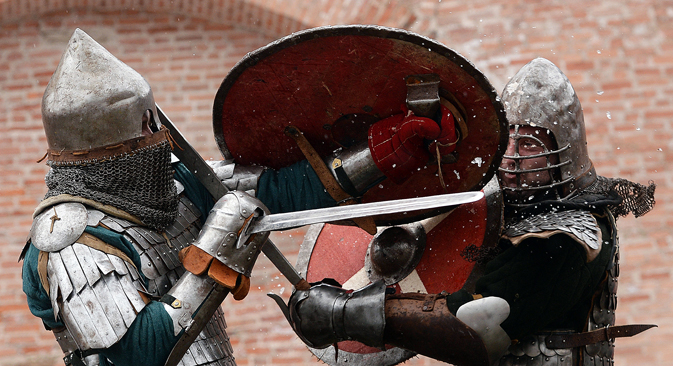 Participants in the Muster of Martial Retinues reenact a fight between warriors at the walls of the Novgorod Kremlin. Source: Konstantin Chalabov / RIA Novosti

Widely depicted in ancient icons and paintings, the teardrop helmet is the most recognizable part of a Russian medieval warrior’s outfit. In 1913, a stylized thick felt version was created to mark the 300th anniversary of the Romanov dynasty. While meant for ceremonial events and theatrical productions, this throwback of Russian fashion instead went on to write a new chapter in the history of Russian military style.

By the 8th century, the Slavic tribes inhabiting the Russian steppes were importing conical hats from Asia. Over the next century, local blacksmiths learned to make similar protective equipment, some of which survives today.

In burial mounds found west of Moscow in the late 19th century, archaeologists unearthed a preserved Slavic helmet and other artefacts dating to the 10th century. Tapering vertically, the helmet was decorated with ornaments, had a special aperture for a plume and was fitted with an aventail skirting of chain mail to protect the wearer’s neck and shoulders.

The mechanism for attaching the chainmail was unique at the time and appeared on other European helmets only in the 13th century. But the archaeologists were most struck by the gold gilding on the helmets, making them works of art as well as military relics.

While the most solid and expensive examples were made for princes and noblemen, the teardrop helmet’s practical design led to its implementation across the vast territory of the nascent Russian state, from the Baltic to the Black Sea.

Its main advantage over other styles was how it deflected chopping blows from the head to the aventail and body armor, while diminishing their force.

In the 12th and 13th centuries, Russia was plunged into an era of feudal wars that brought the country to near ruin, but this era also accelerated the art of armament-making.

In the Battle of Lipitsa in 1216, Yaroslav, one of the sons of Grand Prince Vsevolod of Vladimir, was routed with his forces. As he fled, the prince removed his helmet and hid it under a bush, where it was found by a peasant 600 years later.

Displayed today at the Moscow Kremlin, the shiny helmet of Prince Yaroslav Vsevolodovich is one of the finest examples of medieval armor in the world. 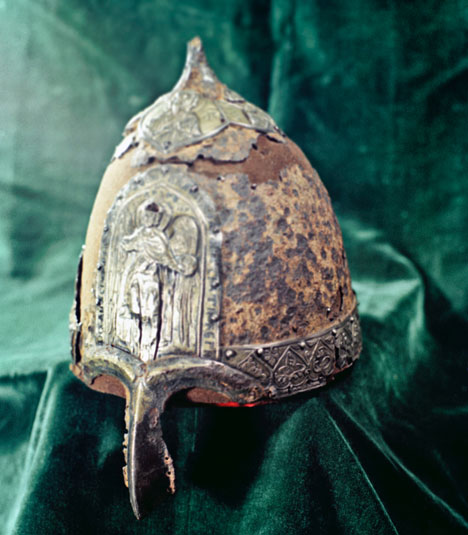 A helmet of Yaroslav Vsevolodovich. Beginning of the 13th century. The Armory Chamber of the Moscow Kremlin. Source: Vladimir Vdovin / RIA Novosti

In addition to its forged face-protecting lines, the exquisitely crafted helmet is gilded with silver coins with the image of St. Michael the Archangel, the patron saint of soldiers.

Meanwhile, helmet design was also evolving in the south of Russia, where the settling Slavic tribes were in active contact with the nomads of the region.

Oriental features were assimilated to produce the pointed shishak helmet, which also deflected sword blows and shielded the face with a metal plate with eye holes. The helmet was sometimes even styled like a face, and such designs are widely found from Japan to Central Asia.

In the 13th century, much of Russia came under the rule of the Mongols, and Russian soldiers in these regions continued to wear their teardrop helmets, which were similar to the Mongols’ armor.

The south of Russia came under Polish rule, however, and the ancient helmets were abandoned as local lords adopted western-style weapons. In the north and around Moscow, the ancient helmet was retained, and was a feature of the era’s many wars and battles.

It became redundant as firearms were developed, but this process was much slower in Russia than in the West. The nomads who assaulted the lands of the Muscovite tsars and princes had not yet learned of gunpowder, and the saber remained the primary weapon for several generations.

The Russian helmet remained effective in such close-quarter fighting, and in 1380, Dmitry Donskoi wore a shishak during the Battle of Kulikovo – a major defeat for the Mongols. The same helmet was worn by Ivan IV (the Terrible) 150 years later during the storming of Kazan.

This style of helmet also remained integral to ceremonial wear, with each successive tsar or prince acquiring their own opulent examples, and sometimes for their children too: In 1557, Ivan the Terrible had a shishak forged for his three-year-old son.

Today, the Kremlin museums in Moscow keep an array of magnificent ceremonial helmets of the first Romanov tsars.

Some were newly made at the time, while others were converted from old or imported prototypes. But all are genuine works of art, worn by the tsars on state trips and during major military campaigns. 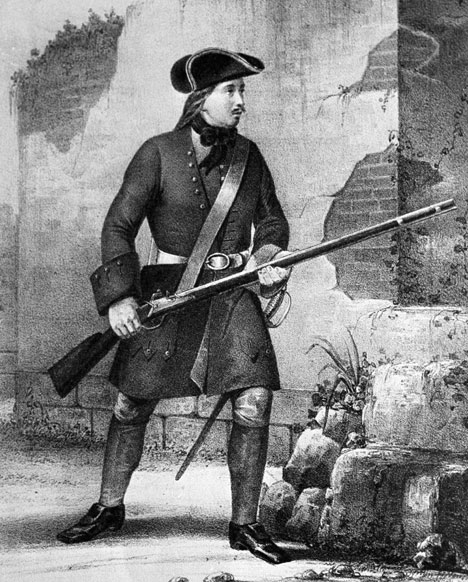 "A fusilier of the Semyonovsky Regiment of the Royal Guards, established by Peter the Great in 1687". State History Museum, Moscow. Source: Galina Kiseleva / RIA NOvosti

The ancient helmets finally vanished during the modernization of the Russian army under Peter I (the Great) in the early 18th century. Heavy cavalry still wore armored breastplates and helmets, but these were already of European design.

The classic helmet of the ancient heroes got a new lease on life in the early 20th century, however. Known as the Budenovka, named after Soviet cavalry officer Semyon Budyonny, this felt copy of the shishak was adopted by the Red Army during the Civil War. 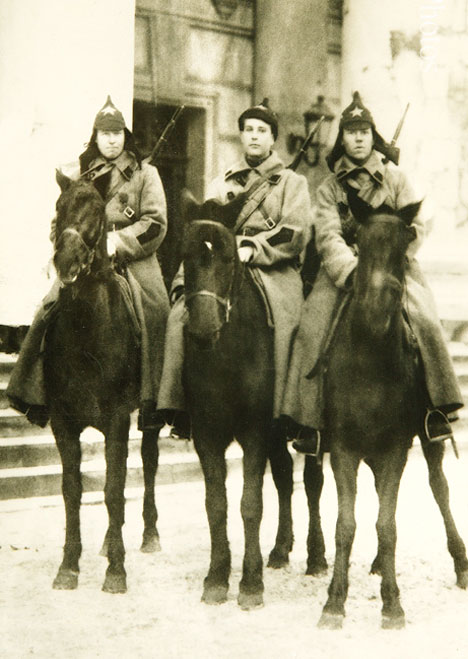 It was a peculiar echo of a tribute to a dynasty that had just been exterminated by the Bolsheviks, but a worthy salute to warrior tradition and valor through the centuries.