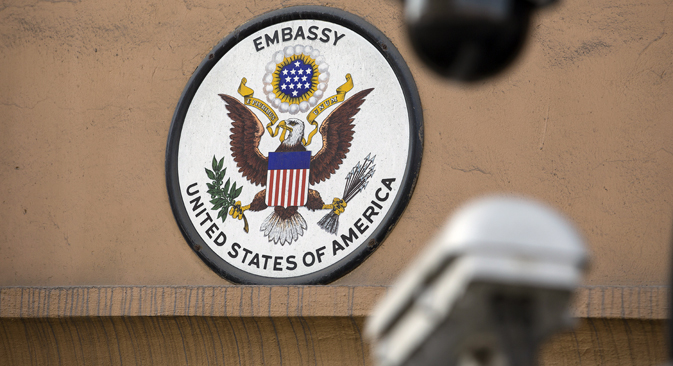 Successful spy operations are already a thing of the past, with modern-day intelligence seeming to consist of a series of failures. Source: TASS

Operation “Information of Our Times”

Soviet intelligence ran this operation at the beginning of the 1930s, when its most important target was anti-Soviet émigré organizations. The majority of those organizations were not only under surveillance, but sometimes specially created by Soviet agents. 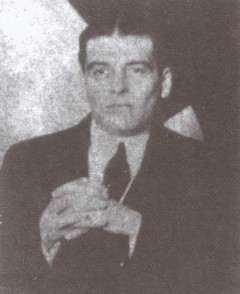 The Russian All-Military Union’s (ROVS) Combat Organization of White Émigrés remained out of Moscow’s reach for quite some time. But then a character under the pseudonym Ivanov came onto the scene, with a house in Paris that doubled as an equipped ROVS headquarters. A local People's Commissariat for Internal Affairs (often known by its Russian acronym NKVD) agent made contact with Ivanov in 1929 and he agreed to help them.

Starting in January 1934, regular wiretaps were set up to listen to conversations held at the ROVS headquarters. This helped Soviet intelligence gather details of the organization’s activity.

Ties with Ivanov were temporarily shelved on the eve of Nazi Germany’s occupation of France, but that did not save him from exposure. The Gestapo hunted him down and arrested him in June 1942, and he was shot two years later. It was only discovered at the end of the 1980s that Ivanov was Sergei Nikolaevich Tretyakov, a leading member of the Russian émigré community.

The wiretapping of Franklin D. Roosevelt in Tehran

Prior to the conference of Allied leaders in Tehran, the Germans forged a plot to assassinate the heads of the USSR, the U.K. and the U.S. However, Soviet intelligence exposed the Nazi plan just in time.

A group headed by Soviet spy Gevork Vartanian identified all Nazis stationed in Iran, which resulted in the arrest of more than 400 German agents several days before the conference. For safety purposes, American President Roosevelt stayed at the Soviet Embassy, even though the British Embassy was located across the street from it.

Later, KGB Colonel Oleg Gordievsky, who defected to the West, portrayed the affair as if the NKVD had wanted to lure FDR to the Soviet residency for the purpose of wiretapping the American’s conversations.

However, documents declassified in 2000 indicate that Roosevelt probably chose the USSR Embassy out of a desire to prevent Stalin from having reason to think a British-American conspiracy was underway. As an experienced politician, FDR must have understood that both the British and the Soviets would eavesdrop on him. Therefore, he probably refrained from giving too many secrets away.

A bug in the U.S. coat of arms

Soviet-American relations rapidly deteriorated after the war ended, so information about the enemy became particularly valuable to Moscow. Russian intelligence therefore set its sights on the American Embassy in Moscow. One particular trick brought it great success. 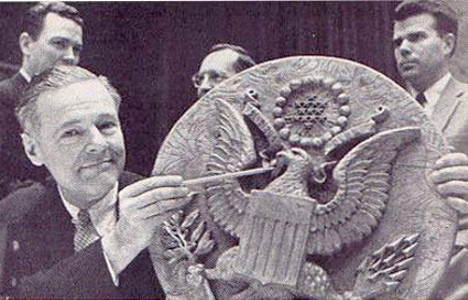 A bug in the State Emblem. Source: topwar.ru

A bug called Chrysostom (also known as Golden Mouth) was delivered to the embassy already implanted in a gift from Soviet Pioneers – an elaborate replica of the Great Seal of the U.S. carved in wood. The souvenir was so beautiful that the U.S. ambassador hung it on the wall of his office. Thanks to Chrysostom, for seven years the Soviet government was able to learn about the ambassador’s plans before they even reached the desk of the American president.

Chrysostom survived four ambassadors. The furniture changed, but the bug kept its place on the wall. The Americans finally discovered it in 1952, when its radio signal was modulated. At first the Americans did not realize that the bug was hidden inside the eagle on the emblem.

It had no battery – it was just a resonance chamber with a flexible front wall acting like a diaphragm, which changed the dimensions of the chamber when sound waves hit it. It was operated by a radio ray coming from a building across the street.

Bugs in Moscow and beyond

In January 1983, while repairing a teleprinter at their embassy in Moscow, the French discovered an implant designed to transfer information to an external grid. An investigation revealed that the KGB had been intercepting all posts made by French diplomats since 1978. In 1984, a technician from Soviet intelligence built bugs into 30 new typewriters for the U.S. Embassy in Moscow. The KGB also actively installed bugs in the new U.S. Embassy building in Moscow when it was under construction in 1979.

Some elements of the listening devices were built right into the building’s structure, which made them extremely difficult to detect. However, the Americans still managed to find some of the bugs, and Vadim Bakatin head of the KGB at the time revealed more of them during perestroika in the late 1980s.

The Soviets did not limit their bugging to Russian soil. Soviet agents in Beirut planted a microphone in the British Ambassador’s office in January 1966, and in February of that same year they bugged the Secret Intelligence Service resident’s office (called Operation Ruby).

As a result, that year Soviet intelligence identified more than 50 British MI6 agents in the Middle East and Egypt, and uncovered the identities of six people planted by the British into the KGB, GRU (Main Intelligence Directorate of the Soviet Army) and the Czechoslovak security service.

At the end of 1969, the KGB’s New York team bugged the conference room of the U.S. Senate Committee on Foreign Relations, which gave it four years of access to everything discussed there.

On April 25, 1975 with the Cuban government’s approval, the USSR started building a radio interception post on the basis of the GRU building in Lourdes, a Havana suburb. The post was equipped with a 12-meter fixed antenna and a seven-meter mobile receiver installed on a truck. These antennae intercepted microwave-range messages sent from American satellites, as well as controlled contact between microwave communications towers. 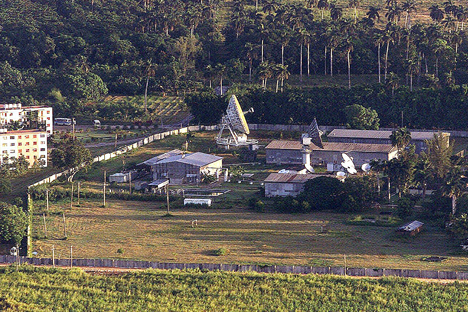 With help from the Cubans, the USSR was able to put its proverbial ear right up against U.S. walls and intercept radio data throughout the country. The Soviets updated the center’s equipment on several occasions and by the 1990s it was capable of spying on communications satellites.

“The amount of information gathered with the center’s help was enormous,” said Nikolai Leonov, former chief of the KGB’s analytical department. “Even telephone conversations between road stations were monitored, not to mention significant events like missile launches and the ability to monitor their trajectory.”

Russia closed the base in Lourdes in 2002. Some media outlets have speculated that Russia may restore operations in Cuba, but for now it remains just that - speculation.