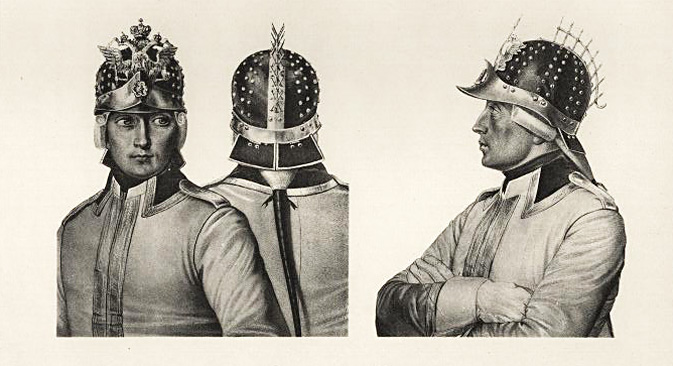 Between 1812-1814, liberated cities across Europe from Warsaw to Paris witnessed huge Russian victory parades marking the defeat of Napoleon’s forces. But it wasn’t just the numbers and sense of occasion that dazzled the crowds - the discipline, drills and uniformed presence of the Russian troops underscored the country’s place among the great world powers - largely a result of the reforms initiated by Alexander I.

In 1801, Russian Emperor Paul I was assassinated after just five years on the throne, abruptly putting the brakes on the Germanizing tendencies that had characterized his short reign. German words that had been adopted into Russian under Paul were gradually abolished, while the still more pronounced reforms he had introduced in the military were rolled back.

Under Catherine the Great’s marshals Grigory Potemkin and Alexander Suvorov in the 18th century, a simpler form of dress had been valued for its practicality in battle, but when Paul I swept in, he chose to mould his personal regiments on the German model, while also instilling in his sons a passion for the external characteristics of army life like square-bashing (a type of parade-ground drill) and parades.

Under Alexander I, who succeeded Paul, the inconvenient practice of wearing braids and curls among the troops was erased, and the figure-hugging Prussian model uniform was also replaced by a version more familiar to the Russian soldier. However, Alexander remained bound to Paul’s organizational ethos, based on petty regulations that sought maximum uniformity and regulation.

In 1802, Russian military uniform underwent another complete overhaul, as it periodically had since Peter I (the Great) had first begun modernizing Russia’s military forces in the late 1600s. But the concept of uniform was now entrenched and would now only evolve.

The old long army caftan finally took the form of a waist-length double-breasted coat with long tails at the back. Knee-length pantaloons were replaced with pants with sewn-on leather leggings that were worn over boots. And instead of the former winter coats and sheep down jackets, the greatcoat made its debut in 1802.

Made of coarse, undyed woollen cloth, it became an integral part of Russian military uniforms and remained almost unchanged more than half a century. If needed, it could be turned into a cloak, while its long sleeves allowed for size adjustments for the individual soldier.

The most distinctive uniform element introduced in the early 19th century was the shako, a tall cylindrical cap fitted with an impressive ‘sultan’ plume that was worn by the lower ranks of the infantry. As well as being decorative, the cap effectively protected the head against saber blows.

Over time, the top and sides were reinforced with black leather and the front with a copper plate shaped like a double-headed eagle or flaming grenades.

The shako was altered on the eve of the 1812 war to give it a concave top and sides. Still bearing a plume, the form was unique and immediately indentified Russian soldiers during parades of the allied forces.

Officers were issued with bright epaulettes (‘shoulder boards’) with fine fringes woven with gold or silver thread to denote junior officers, and thicker fringes for senior officers. The center of the epaulettes bore decals denoting the exact rank and branch of service, and were coloured for officers according to their unit. Officers also wore a braided aiguillette from shoulder to breast, and a plumed felt hat.

The most resplendent uniforms were worn by the Russian light cavalry, the hussars, whose riding style and tactics originated in the steppes of Hungary. The Russian hussars also adopted the Hungarian style of dress, including the dolman short jacket. With its high collar and tassels it was a source of immense pride, distinguishing the cavalry from other forces. A mentik cape with buttons and loops was worn over the jacket, but was tethered over the shoulder in warm weather. All parts of the hussars’ uniform were made of high quality material and trimmed with gold and silver thread.

Generally, army officers had their uniforms tailored at their own expense, so especially well-made outfits directly reflected the individual’s status.

The finest general issue outfits went to the Imperial Guard, whose members wore distinctive colored shoulder boards. A number of Guards regiments also had special distinctions in their dress.

The reform of military dress in the early 19th century saw innovations like the shako, but some distinctive items were eliminated at the expense of regimental tradition. One was the famous Grenadier miter, a borderless hat with a prominent front peak.

The grenadiers all received the standard infantry shako, except the Pavlovsky Life Guards Regiment, which the tsar allowed to retain the miter in recognition of its distinguished service. Having survived the cull of modernization, the headwear became synonymous with regimental pride and was worn until the 1917 Revolution.