Where do women stand in Russia’s armed forces in the 21st century? 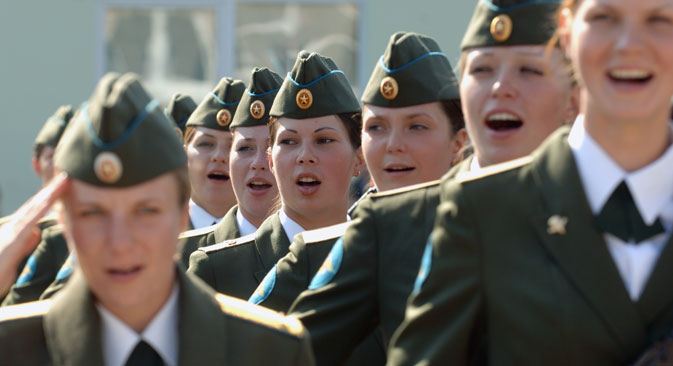 An entire women’s army is undertaking service in the Russian armed forces, comprising more than 35,000 representatives of the fairer sex, of which 2,600 are officers and 72 hold commanding positions. Source: Sergei Pyatakov / RIA Novosti

A recent debate about whether or not women will soon be able to enter service on submarines in the Russian Navy has once again raised discussion on the role and place of women in the Russian armed forces. RBTH takes a look at the situation with female recruitment in the Russian military in the 21st century.

At the beginning of March, a source in the Ministry of Defense told the Interfax news agency that women will be able to serve on Russian Navy submarines after 2018. However the Russian Navy has denied this information, sparking renewed discussion of the role of women in the country’s armed forces, which has accepted members of the fairer sex since 1914.

The navy highlighted the fact that the discussion is not about discrimination, observing that women serve in communications units, medical units and at shore facilities. In the cramped space of a warship, and even more so, a submarine, it is simply impossible to create comfortable conditions for members of both sexes, as has been shown by a number of scandals in the U.S. Navy.

Even though American ships are much more advanced than Russian vessels, and take care to ensure the comfort of their crews even at the planning and design phase, they are nonetheless unable to avoid unpleasant conflict. One only has to look at the recent scandal of the 24-year-old sergeant (2nd class) onboard the submarine Wyoming, who not only recorded female colleagues in the shower or changing room, but also distributed the recordings.

Incidentally, it is unlikely that Russian women will be offended by the Russian army, which has already prepared extremely serious tasks for them. On March 15, the Russian Deputy Minister of Defense, Tatyana Shevtsova, announced that this year more than 220 women had entered military academies, and that the Cadet Corps comprised almost 1,000 girls.

"Girls that are only now beginning their military education, in 10 years’ time, perhaps, will be entering the army and after some time will take up important and responsible posts. Our mission is to train worthy successors, prepare a real pool of talent for our armed forces,” said Shevtsova.

Shevtsova was not exaggerating: There really are positions for them to take up. An entire women’s army is undertaking service in the Russian armed forces, comprising more than 35,000 representatives of the fairer sex, of which 2,600 are officers and 72 hold commanding positions.

Medical research carried out during the Soviet period demonstrates that a woman with the same body mass as a man is substantially weaker. However, they possess psychological and physical characteristics which make them capable of a series of opportunities that are not available for their male counterparts: They have greater endurance, can withstand physical and emotional stress better, are more meticulous and accurate. For this reason, women in the armed forces often work in areas providing information and communications support, staff, psychological and medical services.

In Russia, unlike in other armies around the world, there has never been a separation between military and non-military positions. Women wear epaulettes and that means when ordered by their commander to attack, they attack along with everybody else. Over the last few years 710 women have participated in active military operations.

It is a different matter that different traditions have developed that try to spare women, both on the battlefield and in times of peace. In war a commander does everything he can to avoid sending them to the frontline unless absolutely necessary, and in peacetime can forgive them for wearing make-up or jewelry.

In everything else their day-to-day life and training is little different to men’s. They run forced marches of 15 km, throw grenades, fire all kinds of weapons, and even test-drive tanks. The only unofficial relief for them is the lack of some forms of statutory and non-statutory punishment – military detention or heavy exercise like multi-kilometer runs wearing body armor or gas-masks.

Women have even made it into elite units. The Ryazan Airborne Training Academy is currently training a cohort of women who will shortly become officers and will command the parachute packing units, as well as helping with para-drops of military equipment and airborne troops. They also have to learn to parachute, just like the 383 women who are already serving in the renowned 76th Pskov Division of the Airborne Forces. 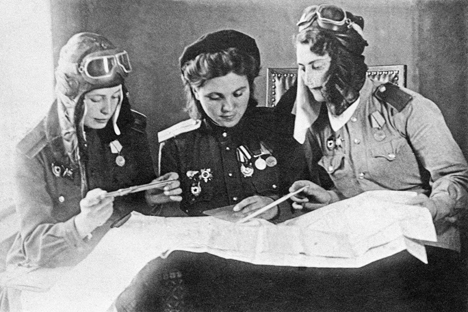