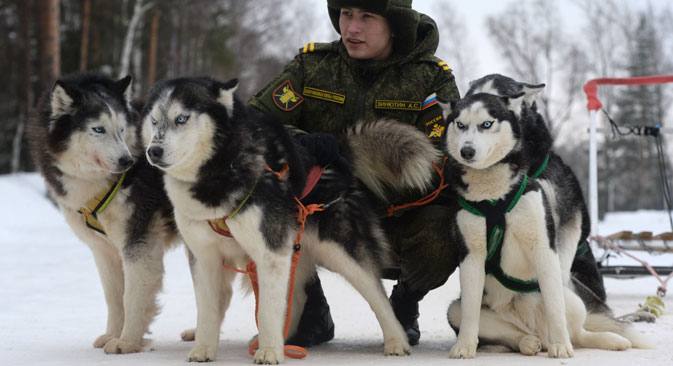 A cadet with Huskies during the military cynologists' training sessions at the Training Center for Service Dog Breeding. Source: Mikhail Voskresenskiy / RIA Novosti

One of the most important roles in Russia’s military is played by man’s oldest friend, the dog. Highly-trained canines are of vital importance in locating explosive devices and patrol duties, and the process of preparing dog trainers and their four-legged charges is rigorous.

Everyone knows about police dogs, thanks to numerous programs and films about the daily work of police dogs such as Commissar Rex: the tracing, the chasing, the arrests. However, the dogs that serve in the world’s armed forces are often unjustly forgotten. In Russia, where about 6,000 canine soldiers are currently serving in the military.

The Krasnaya Zvezda breeding ground is located at Center 470. A new breed was introduced in the center in 1952: the Black Terrier, also known as Stalin's Dog.

The elite of Russia’s dog forces is prepared in Training Center for Service Dog Breeding No. 470, which has seen more than 400 future military dog trainers progress successfully to the final stage of preparatory training. Those wishing to become a military dog trainer must study for six months and finish a course dealing with combined arms and veterinary preparation, as well as learning the basics of training their four-legged future colleagues.

Since the profession of military dog trainer is considered to be one of the most prestigious in the armed forces, the Defense Ministry prefers to hire people who in their civilian life have a similar profession, such as veterinarian or zoo technician. Personal qualities are also important. People who are patient, nonaggressive, dutiful and capable of tolerating monotonous activity have better chances, since dog training involves repeating commands and carrying out the same functions over and over again.

Selecting the right person is already half the success in the man-dog working tandem, especially since in the initial phases of preparation the two can experience significant friction, which often prevents objectives from being met.

"As strange as it may seem, the most difficult thing is the initial preparation," says Vadim Popov, who served in the 470th dog breeding center during his military service. According to Popov, the general preparation course does not differ much from the civilian course.

“The dog is trained to walk close to you, is accustomed to the leash and collar, is trained to jump, climb vertical ladders and to swim,” he says. “When you start interacting with the animal you make mistakes: You give the wrong commands and the dog does not understand them. Or you are too demanding with the animal, overestimating the dog's capabilities."

However, by the beginning of the special "military" preparation course the progress is already obvious, and teaching the dog to do difficult things such as reacting to ordnance flashes or explosions, discerning the front from the rear and stopping the violator becomes easy.

The 470th center is currently concentrating on two applications in dog training: mine-detecting and patrol service.

The aim of a patrol dog is to detect a violator at a great distance and start barking in order to warn the guards about the presence of the intruder. The dog decides by itself whether or not to attack the intruder, and if necessary, will do so.

Due to the threat of terrorist attacks, the mine-detecting function now has a greater role than the patrol one. In this function dogs are irreplaceable and have an edge over any technology.

During the years of WWII service dogs transported 700,000 wounded soldiers from the battlefields to field hospitals, destroyed more than 300 tanks and delivered 200,000 crucial reports.

According to military commander Dmitry Karchevsky, the dog's nose is “the best invention ever made.” Even the most sophisticated mine-detector may not react to a mine's plastic body, whereas a dog will always find it, since it is trained to perceive the special smell of the explosive device. Experienced dog trainers affirm that during a mission a four-legged sapper is capable of smelling an explosive device located, for example, two floors below it.

The working specialization depends on the dog's breed. For mine-detecting service the best breeds are Spaniels and Labradors, while all types of Shepherds, Rottweilers and Moscow Watchdogs make the best "patrollers" since they are bigger, stronger and most importantly, meaner.

Taking care of their own

Sometimes the dogs come to military service with their owners, they serve together for a year and then go home. However, such cases tend to be isolated. Usually, the conscript and the dog meet in the breeding center, where the dogs spend an average of eight years (after training in the center the dogs go to serve in the forces), while the conscripts serve only a year. Thus, service dogs change owners seven or eight times.

The conscript often gets attached to the dog, however, he is not allowed to take it home. Service dogs are property of the Defense Ministry, just like tanks and airplanes. Yet, when the four-legged warriors retire from the forces they are adopted by servicemen, who provide them with dignified care during their old age. 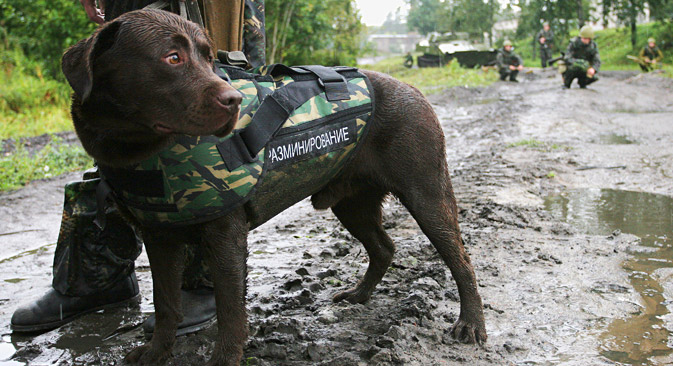