Saddling the iron horse: How Soviet tanks were born and bred 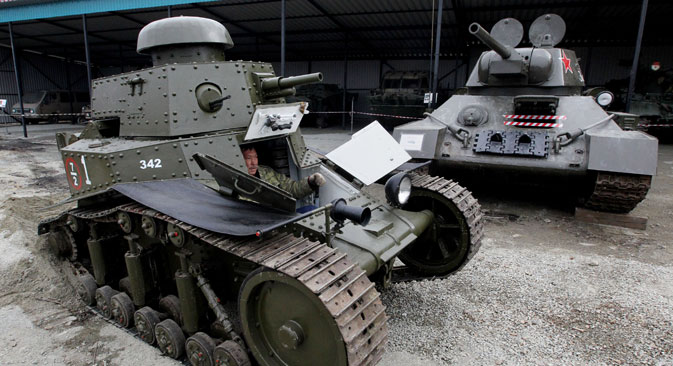 An MS-1 (T-18) Soviet tank restored by the staff of the "20th Century Equipment in the Primorye Territory" military patriotic club's museum to take part in the celebrations of the 70th anniversary of the victory in the Great Patriotic War. Source: Vitaliy Ankov / RIA Novosti

In the previous instalment of Armed by Russia, we looked at the T-60 and T-70 “locusts,” as the Soviet light tanks were known to the enemy for their swarming attacks in WWII. Now, just days after several generations of tanks rolled across Red Square in one of the largest ever May 9 Victory Day parades, we remember the first ever clanks of Soviet caterpillar tracks.

Russia is today considered one of the world’s leading nations in tank design, but in the early 20th century it lagged well behind in the field and had to make up an enormous technical gap between itself and the leading powers of the era. The story of how the Soviet Union caught up with its rivals in the space of just a few years is a remarkable tale of opportunism and determination.

The Imperial Army knew about tanks only from hearsay, as Russia had no tank development of its own in pre-revolutionary times, apart from a handful of loose projects and experimental models. In 1914-1915, several basic tank designs were proposed. Those tabled by military engineers Alexander Porokhovshchikov and Nikolai Lebedenko were vastly different from each other, although they were equally useless in military terms.

The first was essentially an armored all-terrain vehicle that resembled a fat bug, while the second was a 60-ton tricycle-type construction with two giant spoked front wheels that were nine meters in diameter. Known as the “Tsar tank,” it was the largest wheeled vehicle in military history, and was eventually abandoned because it was underpowered and too vulnerable to artillery fire.

Frustrated by the failed attempts to build its own tank, the Tsarist government went down the tried and tested path of buying military equipment from abroad. France was commissioned to build 300 Renault tanks for the Imperial Army, but the order was disrupted by the 1917 Russian Revolution. The French tank still appeared in Russia eventually, though not as an import but as a trophy of war, following the defeat of the White Russian forces in the Civil War. The Renault was brought to Moscow, dismantled, and used in efforts to design the first Soviet mass-produced tank, to be called the “Comrade Lenin freedom fighter.”

It was only in the mid-to-late 1920s that the Soviet leadership fully grasped that the next large-scale war in Europe would be a clash of armored vehicles. In 1924, the authorities set up a technical office at the General Directorate of Military Industry, a centralized authority that would run the design, testing and adoption of new tanks into the Red Army. Finally the state got to grips with the task of producing this essential weapon, and work became a national priority.

It was 1926 when the first three-year Soviet tank building program got under way, although how the "iron horses" would actually be used in combat had still not been thought through. The tank was mainly conceived as a means to support the infantry and this was the task envisaged for the first combat models, due for completion in 1929. Once again, development co-opted features of existing foreign models. During the Polish-Soviet War in 1920, Soviet cavalry had captured an Italian Fiat 3000 tank, which was also based on the very same Renault. The Soviets then took the design further.

The resultant T-18 (MS-1) small escort tank was the first all-Soviet product and looked relatively good for its time. Armed with a 37-mm cannon, carrying 8-mm bulletproof armor and able to move at 10 miles (16 km) an hour, the design was quickly adopted as the core element of the Red Army's tank forces. Around 1,000 T-18s had been built by 1931, but by this stage plans already existed for an upgrade. Despite attempts to extensively modernize the T-18, the limitations of the resultant T-20 showed that the scope for improving on the original Renault design had been exhausted.

But before the Soviet designers really came into their own in the 1930s, there was still one vital chapter of foreign influence to come: American engineer and tank enthusiast John Walter Christie, who was a major source of inspiration. In his work for the U.S. government, Christie’s various projects had qualitatively changed the understanding of how to build these machines. But while his talents remained largely unrecognized and fulfilled in his homeland, they came to maturity in the Soviet workshops. Christie is best known for developing the Christie suspension system used in a number of World War II tank designs, notably the Soviet BT and T-34 series. 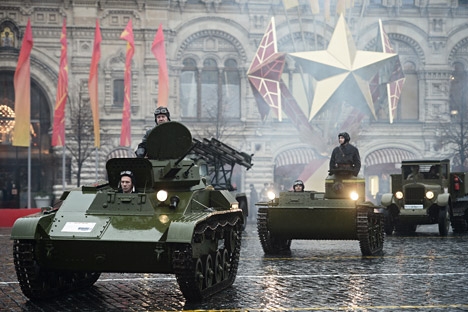