The Admiralty Shipyards: Laying the keel for Russia’s naval ambitions 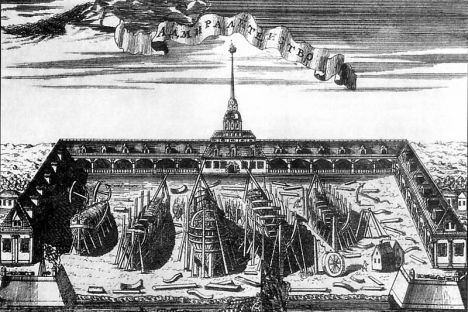 View of the Admiralty shipyard in an engraving by Alexei Zubov, 1716. Source: Open sources

With no access to navigable sea routes until early in the 18th century, Russia was a long way behind the great European powers in developing a navy. But when Peter the Great gained a foothold on the Baltic Sea in 1703, he set about transforming Russia into a naval power by first founding his new capital St. Petersburg and then opening the country’s first – and still the largest - shipyard.

With its origins deep in the forests and steppes of continental Eurasia, for centuries Russia had no access to the sea and no-ship-building experience, so it was no surprise that the country had no navy until the start of the 18th century.

This major lag behind the times led to the country’s isolation, since no ships meant no lucrative overseas trade and no possibility to compete with the leading European nations and their powerful navies. In 1700, Tsar Peter I (the Great) resolved to change the status quo and take his country to sea.

The core of the tsar’s ambitious naval strategy was to reach the ice-free Baltic Sea and create a navy to protect Russia's interests in this vital region. In 1703, after heavy fighting against the Swedish army, Peter's troops broke through to the Baltic near the mouth of the Neva River. Before them lay an expanse of wild territory where Russia had yet to gain a foothold before beginning its naval construction work.

In May of that year, the tsar founded the city of St. Petersburg, which, in addition to its function as the new capital, was to become the birthplace of the Russian fleet.

Warships from the woods 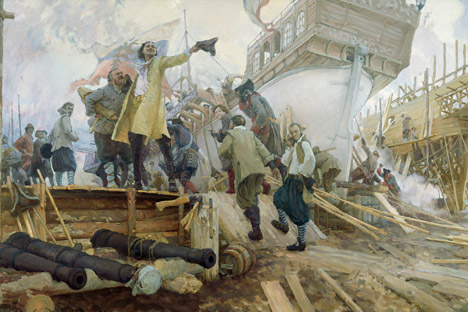 Peter I was a Russian czar (1682), the first emperor of Russia (1721) and the founder of both the Russian navy and the city of St. Petersburg. Source: A picture by Yury Kushevsky

In 1704, on the forested left bank of the Neva, the Tsar founded the first permanent shipyard, duly named in fashionable international style the "Admiralty House." There, in giant construction cradles located in the thick woodland, few were able to see the beginnings of one of the largest future shipbuilding enterprises in the world.

Work in the Admiralty progressed at a rapid pace. While the engineers initially built small vessels like galleys and the three-masted zebecs, work started on the first Russian battleship, the 54-gun Poltava, in 1709, under Peter’s direct oversight. And in 1725, a peasant called Nikonov who had worked his way up at the shipyard designed and built the "secret vessel" prototype of the first submarine.

In the 18th century, the Admiralty functioned like a conveyor belt, turning out one by one vessels of all classes, from single-masted sloops to huge battleships. The pace was intensive, and not only because of the constant wars waged by Russia in the Baltic Sea.

The lifespan of ships built at the mouth of the Neva was no greater than 10 years because of the relatively low salt content in the water of the Baltic Sea near St. Petersburg, where the freshwater Neva emptied out, causing faster-than-average deterioration of sea-going vessels.

A helping hand from the British

In the late 18th and early 19th century the Admiralty Shipyards entered a new era of their history when British master shipbuilders came and set up melting and casting plants. In 1815, one of these engineers, Charles Byrd, built the first Russian steamship. Until mid-century, the shipyard continued to specialize in wooden shipbuilding, but in the 1860s it switched wholesale to the production of metal ships.

In 1865, Russia’s first floating gun battery built for coastal defense went down the slipway, followed by the Novgorod in 1871, and in 1877 by the Explosion, the country’s first destroyer. The same year saw the launch of the Peter the Great battleship, regarded as the most powerful ship of its time. By this time the shipyards had been moved from the city center and by the mid-19th century they were finally relocated to an island at the mouth of the Neva.

The beginning of the 20th century was marked by the most enormous project yet at the Admiralty, where from 1909-1914 the yard built the largest ships in the history of the Russian fleet, the 24,000-ton dreadnoughts Poltava (the modern incarnation of the ancient wooden flagship) and the Gangut. By 1917 the Admiralty Shipyards had built around 1,000 ships for the navy, of which almost 170 were large sail ships or armored vessels.

After the Revolution, the facility was renamed the Andre Marty Shipyard after the French communist, and its production profile also changed. The era of epic sea battles in the Baltic was over, while the role of submarines capable of operating alone in the enemy’s rear had dramatically increased.

Up to World War II the shipyard built 70 submarines of different classes. The Admiralty continued to operate during the war, producing seven submarines despite the complete siege of Leningrad and the starvation of its population.

After 1945, the Admiralty Shipyards mastered the construction of civilian types of vessels, from tankers to trawlers and floating fish processing factories. In 1959, the world's first nuclear-powered icebreaker Lenin was also launched here.

Today, the shipyard is still the largest industrial enterprise in St. Petersburg, building diesel and nuclear submarines for Russia and a variety of vessels also for foreign navies, as well as a wide range of civilian vessels including tug boats to deep-sea research vessels. 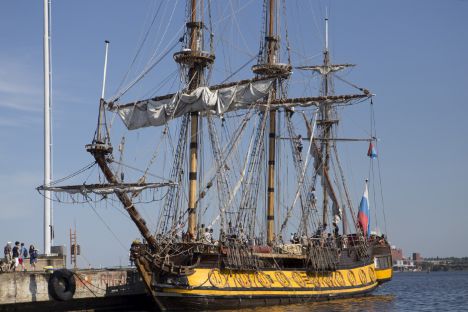