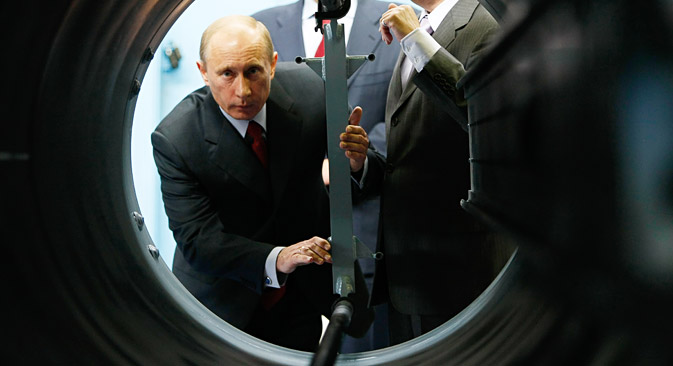 Today Russia is a world leader in the development and production of anti-aircraft missiles, with its S-300 and S-400 systems still unequalled and able to take out even Stealth bombers if required. Just 70 years ago, such a lethal air shield was unimaginable on the ground.

The Second World War showed that artillery had irrevocably lost its age-old mastery of the combat space, unable to compete with the far greater range and fire power of rapidly developing aviation technology. But since planes were flown by people, the weakness of air power lay in the many months and years it took to train skilled pilots. Consequently, Western armies began to develop unmanned missile-based anti-aircraft weapon systems to help even the field.

In the Soviet Union this work began in the war years, led by engineer Sergo Beria, son of Stalin's Commissar of Internal Affairs Lavrenty Beria. The Beria Jr.’s project was a success: In 1951, using the facilities of a secret enterprise, the engineer’s team was able to create a flying projectile that could even pierce a sea cruiser’s armor.

In aviation circles meanwhile, it was clear that there was little sense in trying to build elaborate fixed defensive lines against conventional bombers, but since one nuclear charge could destroy an entire city, a new agenda priority was the construction of a defensive system to secure Soviet cities from even a single enemy plane. Missile systems held the key to solving the task.

The government decided to protect Moscow with two rings of air defense missile systems, connecting them with concrete roads for the transport of a new type of missile that pinpointed targets using radar and use missiles fitted with a warhead to destroy them.

The development and testing of the project took five years before the first Soviet anti-aircraft missile system, the S-25, was put into service in 1955. No world army had anything like this new weapon, which could hit targets flying at supersonic speeds at altitudes of up to 20 km (65,600 feet). It was naturally no small feat to create it: Beria’s small design office was transformed into a large-scale enterprise with thousands of employees to do the job.

As formidable a weapon as the S-25 was, it still required a mobile system that could be easily moved and hidden in order to roll out a protective shield across the territory of the Soviet Union. The result was the S-75, the appearance of which caused a revolution in the science of aerial warfare.

In 1960, the system’s first missile fired in anger hit and downed the U-2 U.S. spy plane over Sverdlovsk, leading to the capture of pilot Francis Gary Powers. The weapon also inflicted heavy losses on the U.S. Air Force in Vietnam after the North Vietnamese deployed large stocks of the Soviet-supplied missiles by hand into the jungle. These were used to destroy more than 2,000 U.S. combat aircraft.

In 1962, the S-75 was also shipped to Cuba to cover the planned but later aborted deployment of Soviet nuclear missiles on the island.

A Soviet-made surface-to-air V-75 (NATO code name SA-2 Guideline) missile shown at the Palace of the Revolution, May 7, 2007 in Havana. Source: AFP/East News

In order to evade Soviet air defense system radars, enemy aircraft began to operate at extremely low heights, a tactic that resulted in the development of a new combat system, the S-125.

In 1967, employees of the design bureau founded by Beria developed the next-generation air defense system, the S-200, which was capable of hitting targets at a range of more than 200 km (125 miles). A small number of mobile systems could now cover vast areas if correctly placed.

A landmark achievement of the Beria enterprise, which was named the Almaz (“diamond”) design bureau in 1977, was the S-300. Adopted by the Soviet Army in 1979, the system is still the leader in its field today, with its radar enabling the user to pinpoint targets at up to 300 km (200 miles) and simultaneously fire on more than 30 objects.

Its successor system, the S-400, has even more impressive capabilities, able to combat the Stealth aircraft deployed by the United States.

In 2008, the Almaz-Antey joint stock company was created by combining all of the enterprises involved in the development and production of air defense missile systems. The company’s engineers are now working on a fifth-generation anti-missile system that will be able to eliminate targets in near space, including ballistic missiles.

Today the company’s large volume of exports cements its place among the enterprises of the Russian military-industrial complex. Almaz-Antey fulfilled 28 contracts with 11 countries in 2014, and in February this year reportedly had more than $200 million worth of orders in its ledger.