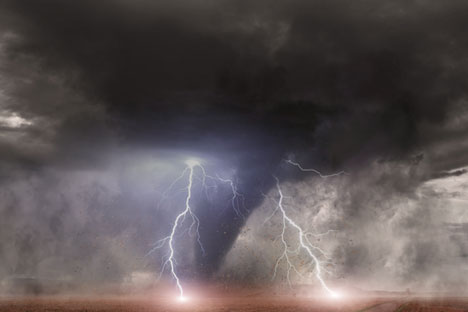 Shutter Stock/Legion Media
The Russian Ministry of Emergency Situations predicts the appearance of completely new kinds of weapons. RBTH tries to get a handle on which weapons threaten Russia and gauge Russia’s preparedness.

These weapons are based on the use of energy from electromagnetic radiation along the optical spectrum. Despite the fact that lasers have already been used for a long time in everyday life including in the military environment, only recently have researchers started to work on creating effective combat systems based on this type of weapon. The first examples of laser weapons, which appeared in the 1960s, could not hit two targets within a short time interval due to their high consumption of energy.

In 2015 American researchers tested a laser cannon stationed on an offshore platform for the first time. Russia is also working on the development of laser weapons and according to the military it is not far behind the U.S. in this area. From publically available sources it has become known that the military has restarted testing the A-60 aviation complex using a new laser gun capable of destroying aircraft, as well as targets located in outer space.

The main damage that this type of weapon causes comes from super-powerful microwave radiation in the frequency range from 3 to 30 GHz. These types of weapons are most effective against enemy’s electronics, abundantly used today in state and military command and control objects, as well in the latest weapons systems of various types.

In the summer of 2015 it became known that Russia had developed a new weapon capable of disabling enemy planes, drones and precision-guided weapons, such as cruise missiles. The new development was given the tentative name of “microwave gun” since it works based on the microwave radiation principle. The device has an operational range of over 10 kilometers.

These types of weapons, which are the direct heirs of biological weapons, are based on technologies within the sphere of heredity processes management and the variations found in living organisms. Genetic engineering makes it possible to deliberately create a combination of genes unknown in nature that could have a positive impact on living organisms, but also could destroy them. The main danger is posed by attempts to create “smart weapons” that selectively affect and destroy organisms that contain a specific genetic code.

According to Russian scientists a significant number of aggressor genes have already been created, which can inherently be turned into deadly weapons. For example, the genes BAX and BCL-2 are capable of inducing apoptosis – the process of programmed cell death. Given the fact that the development of biological weapons is banned by international conventions, Russia is not working on genetic weapons development.

Using a concentrated stream of charged or neutral particles, containing high energy (electrons, protons, or neutral hydrogen atoms), particle beam weapons can direct strong thermal radiation, shock loads or X-rays against an object, which can result in death and destruction.

The main advantages of these types of weapons include their stealth and the immediate effect they have on their target. The main problem in using this weapon is the loss of energy over long distances, caused by the interaction of particles with atmospheric gases. Several scientific institutions actively worked on the development of beam weapons in the Soviet Union, but these never developed into any real combat models.

These types of weapons involve an attack on an object using natural processes, brought to life by artificial means such as lightning, an earthquake a tsunami and so on. While it is known that a variety of experiments and tests were conducted by the U.S. in such places as Vietnam, most experts doubt that it would be possible to cause an earthquake or a tsunami in a specific region of the Earth.

In 1993 Oleg Kalugin, a former major general in the KGB who later emigrated to the United States, said that the Soviet Union was actively working on the development of geophysical weapons and their possible use. He was referring to the Sura Complex, which actually exists and is located about 170 kilometers from the Russian city of Nizhny Novgorod. This complex covers about 10 hectares and consists of long rows of 20-meter antennas. In the center of the complex is a transmitter of impressive dimensions designed to study the acoustic processes in our planet’s atmosphere. However, it is not known if the Sura Complex can actually create “natural disasters.”

Get RBTH best stories every Wednesday