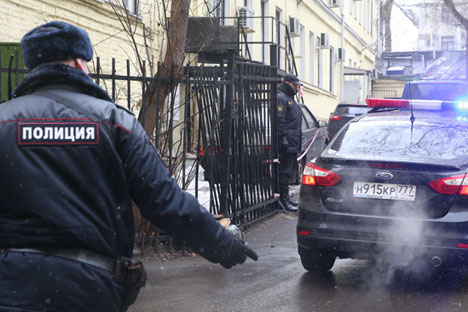 Michael Pochuev / TASS
Defense physicist Maxim Lyudomirsky, one of the team responsible for developing the weapons systems for Russia's new Armata heavy tank, has been found guilty of treason.

The Moscow City Court sentenced Lyudomirsky, who was arrested back in 2014, to nine years in prison on Nov. 18.

Details of the hearing are not known, since the case is classified and was heard in closed session.

Maxim Lyudomirsky was a co-owner of the Elektrooptika research and production complex and concurrently held the post of chief engineer there.

The complex specializes in the development and manufacture of laser strapdown inertial navigation systems (LINS) (a navigation device for aircraft), their basic elements, as well as specialized software.

Lyudomirsky also designed some of the weapon systems for the Armata heavy tank. He is also the author of a number of works on laser technology.

According to the Investigative Committee of the Russian Federation, Lyudomirsky was found to have collaborated with a foreign country, passing valuable information on new developments in the Russian arms industry.

The defendant agreed to a plea deal with investigators and fully admitted his guilt.

Read more: Armata tank and IFVs of the future to be shown at Russia Arms EXPO-2015