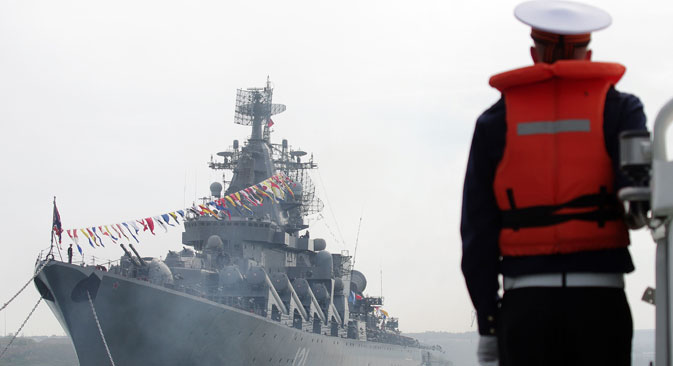 Could Turkey close its straits for Russia?

Vasily Batanov / RIA Novosti
The Russian Defense Ministry has terminated all cooperation with the Turkish armed forces after Turkey's air force shot down a Russian Su-24 bomber on the Syria-Turkey border on Nov. 24. What are the potential implications of this break in military relations between the countries, and could it affect the ability of the Russian fleet to enter and leave the Black Sea?

Relations between Russia and Turkey have deteriorated radically since a Turkish F-16 fighter jet shot down a Russian Su-24 bomber for allegedly having crossed the Syrian-Turkish border, with Russian President Vladimir Putin refusing to answer phone calls from his opposite number Recep Tayyip Erdogan, and Moscow introducing a visa regime for Turkish citizens as well as a package of economic sanctions against Ankara.

Back on Nov. 24, the same day as the incident with the Su-24, Lieutenant General Sergei Rutskoi from the General Command stated that military contacts with Turkey would be terminated, with Moscow recalling its navy representative responsible for coordinating the activities of Russia’s Black Sea fleet and the Turkish navy. The hotline between the two countries aimed at preventing air incidents during anti-terrorist operations has also been turned off.

A century of relations

Russian-Turkish cooperation began almost 100 years ago in 1920, when founder of the Turkish Republic Kemal Ataturk asked Soviet Russia to help him and establish diplomatic relations. The Soviet Union, which was going through a civil war, gave the Turkish government 10 million golden rubles and sent Turkey several military advisers, weapons and military technology.

Russia and Turkey's militaries have led consultations and carried out joint exercises, with the two countries even creating a joint Black Sea Navy called BlackSeaFor, tasked with conducting search and reconnaissance operations and monitoring the ecological situation.

NATO will not intervene

According to Lieutenant General Leonid Ivashov, president of the Moscow-based Academy of Geopolitical Problems, Russia does not need to fear Turkey asking NATO to deploy additional anti-aircraft defense systems on its territory or give it military support, even though tensions will continue to rise.

"NATO's last council on an ambassadorial level, which was convened on Turkey's initiative, refused to support it and there was even no general statement, which NATO usually provides. Stoltenberg spoke for himself, which means that NATO's European members are not burning with desire to help Turkey," he said.

According to Ivashov, Germany and France are unlikely to get involved in the development of the Russian-Turkish conflict. France has even begun a rapprochement with Russia after the Turkish attack on the Su-24.

"Now Russia just has to increase consultations with European countries in a bilateral format," he said.

Inviolability of the Turkish Straits

However, the interruption of cooperation with the Turkish military carries a certain risk where the Bosphorus and Dardanelles straits in the Black Sea are concerned. Nations wishing to use the straits linking the Black Sea and the Mediterranean, which are entirely in Turkish territory, are required to follow the Montreux Convention Regarding the Regime of the Straits. The convention, which was signed on July 20, 1936 in the Swiss town of Montreux and is regularly extended, has a duration of 20 years.

In peaceful times the convention limits the passage of military ships belonging to non-Black Sea countries through the straits. When entering the waters ships are limited to a weight of 15,000 tons.

Moreover, there are limits on the collective tonnage of vessels present in the Black Sea: 30,000 tons for all non-Black Sea countries together. There is also a limit on the time that a ship can spend in the waters: three weeks.

In many cases countries with Black Sea coastlines are free to send their submarines through the straits, as well as large ships without a weight limit, as long as they abide by certain conditions stipulated in the convention, the responsibility for maintaining which lies with Turkey.

If Turkey finds itself at war or threatened by war, it has the right to permit or forbid any military vessels to pass through the straits. If Turkey is not participating in the war, then the straits are closed to ships belonging to the warring countries.

According to Lieutenant General Yevgeny Buzhinsky, former head of the international treaty directorate at the Russian Defense Ministry, Turkey is "very vigilant about the implementation of the Montreux Convention."

"I don’t think that Turkey, even in these tense conditions with Russia, will want to violate the Montreux Convention, because if Turkey begins violating it, it will be very difficult to restore it. We can ask the question: can Turkey close the straits to Russia? Theoretically, yes. But to do so, it must declare war on Russia, since the Montreux Convention states that only in the event of a war can Turkey close the straits," said Buzhinsky.