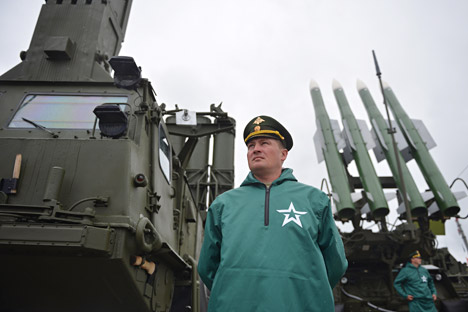 Serviceman in front of the anti-missile S-300 system at the ceremony of opening the ARMY-2015 international forum in the military park Patriot, in the town of Kubinka, Moscow Region, June 16, 2015.

Ramil Sitdikov/RIA Novosti
As Iran is gradually brought in from political isolation following this year’s agreement with the West on its nuclear program, new opportunities are opening up for Russian arms producers – Tehran’s military currently relies on old and outdated weaponry.

With this year’s landmark deal on Iran’s nuclear program signalling the imminent lifting of Western sanctions against Tehran, the sleeping Middle Eastern giant is poised to become a regional power, opening up an arms market with vast potential for Russia.

“Russia is counting on multibillion-dollar contracts with Iran,” journalists were told on Dec. 7 by Vladimir Kozhin, Russia’s presidential aide on military-technical cooperation issues.

Lacking modern weaponry, Iran is a welcome and promising customer for Russia, and analysts have been making optimistic forecasts on the future of military-technical cooperation between Moscow and Tehran, though they do warn that this cooperation will not be instant.

At the end of the 1980s, the USSR and Iran signed four major agreements in the military-technical cooperation sphere, which turned Iran into one of the main buyers of Russian weapons. Iran received Soviet fighters, bombers, air defense systems – and this equipment is still in service in the country’s armed forces.

Since the current state of its military does not meet Iran’s foreign policy ambitions and prevents Tehran from strengthening its military and political influence in the Middle East, especially in light of its intensified struggle with Saudi Arabia for regional hegemony, it is to be expected that the Islamic Republic will seek ways to beef up its armed forces.

The full-fledged establishment of relations with Iran in this sphere will be possible only in five years’ time, when Western sanctions against Tehran are finally lifted. However, the country is already buying some military products that are not covered by the embargo with the approval of the UN.

Today Russia is already supplying Iran with electronic warfare systems for its aircraft and air defense needs, including entire air defense systems and anti-tank guided missiles, as well as carrying out modernization work on old Soviet equipment still in service with the Iranian military forces.

During the International Aviation and Space Show (MAKS) outside Moscow in August, Russia and Iran signed a major agreement on the acquisition of aviation equipment worth $21 billion – but this could just be the start, with the possibilities for cooperation between Moscow and Tehran potentially vast.

Analysts say that since the military hardware mainly in service and production in Iran is outdated equipment and weapons from the Cold War period, the country is interested in updating its arsenal with a whole range of modern arms and equipment, which it can buy from Russia.

“Iran needs to carry out a full modernization of its military equipment, since the country cannot independently establish modern production facilities. Even India, which is much more advanced in this regard, cannot do without such Russian cooperation,” said Alexander Khramchikhin, deputy director of the Moscow-based Institute of Political and Military Analysis, in an interview with RBTH. 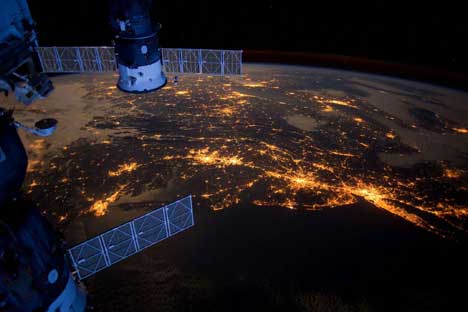 New generations of satellites are Russia’s cosmic eyes and ears

For example, Tehran has announced the creation of a new squadron of its own “modern fighter jets – the Saegheh.” However, according to military observers, these really are only a modification of the long-obsolete Iranian F-5 Tiger.

The same is true for the country’s navy and missile weapons systems. Iran’s fleet of surface warships is also out of date. These are old models, acquired under by the Shah in the 1960s-1970s from the United States and the UK, which Iran is also trying to produce on its own.

The situation in the army is also forcing Tehran to think about the modernization of weapons and equipment. Most of the approximately 5,000 armored vehicles (including tanks, self-propelled artillery, infantry transport vehicles, and mechanized infantry combat vehicles) are old foreign-made units from the 1950s-1960s. Starting in the early 1990s, Iran began the production of its own Zulfikar tanks, but this has not solved the problem of the country falling behind in armored vehicle technologies.

According to Konstantin Bogdanov, a military analyst from the Lenta.ru news website, significant groundwork in the “defense industry” sector has already been laid, and if the sanctions are removed, Iran will no longer operate on the model of the Persian Gulf monarchies, which purchase modern weapons abroad.

It is more likely that it will pursue military-technical cooperation with Russia, and occupy an intermediate position between Algeria and India, increasing the localization of production facilities and licensed assembly of equipment.

Yuliya Sveshnikova, a specialist on Iran at the Higher School of Economics in Moscow, is more cautious in her forecasts for future military-technical cooperation between Russia and Iran.

She warns against undue optimism, as for now relations between Moscow and Tehran remain characterized by a lack of trust, which goes back to Russia’s failure to make a contracted delivery of S-300 anti-aircraft missile systems worth $800 million, resulting in a 2010 lawsuit being filed against Russian state arms exporter Rosoboronexport by Tehran. Thus, it will take time before relations can recover.

“Taking into account its past experience with Russia, Iran expects to see the real fulfilment of contract obligations before it can have its confidence restored in such an important area for Tehran. This will become the real litmus test of the willingness of both parties to further develop their military-technical cooperation,” said Sveshnikova.