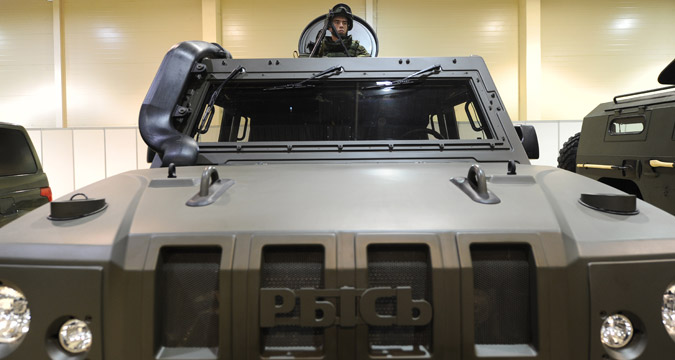 A serviceman in a light multirole armoured vehicle Lynx at the exhibition Innovations Day of the Southern Military District in Rostov-on-Don.

Sergey Pivovarov/RIA Novosti
Despite sanctions Russia continues to buy 4WD tactical Italian-made Iveco LMVs (Light Multirole Vehicle). They are currently being used in the conflict in Syria. Why is the West continuing to sell Russia vehicles that do not feature dual capabilities, but are instead exclusively used for military purposes? RBTH decided to investigate.

There are many photographs on the internet showing Russian soldiers in Syria next to an Iveco LMV. The Italian armored car can be seen on the runway at Khmeimim Air Base, among military convoys on Syria's roads and even as part of the escort for Russia's S-400 anti-aircraft weapon systems. Soldiers from the Syrian armed forces also like having their photos taken in front of it.

The adventures of Italian vehicles in Russia

The Iveco LMV, along with its adopted name Lince (Lynx, 'Rys'), have acquired a very mixed reputation in Russia and are closely associated with the unpopular former Minister of Defense Anatoly Serdyukov. After being dismissed, Serdyukov was implicated in a corruption scheme and came to be criticized by the military for his poorly conceived and radical reforms, as well as his “Westernization” drive in military equipment procurement. As a result of his actions, the Russian armed forces possess Israeli drones and Italian armored cars; the former minister of defense is also responsible for the infamous contracts to buy Mistral helicopter carriers from France. The Italians, as has recently been shown, are seemingly more consistent in their foreign policy than the French. The Iveco supply contract, which initially appeared to be highly problematic, ultimately outlived all other procurement initiatives from Serdyukov’s tenure.

The sale of the Iveco LMV armored cars were not hindered by Western sanctions, which prohibited the supply of not only Russian military equipment, but also dual-use technologies. This is because the contract for the sale of these vehicles was signed before the introduction of the sanctions, therefore they are not covered by them. 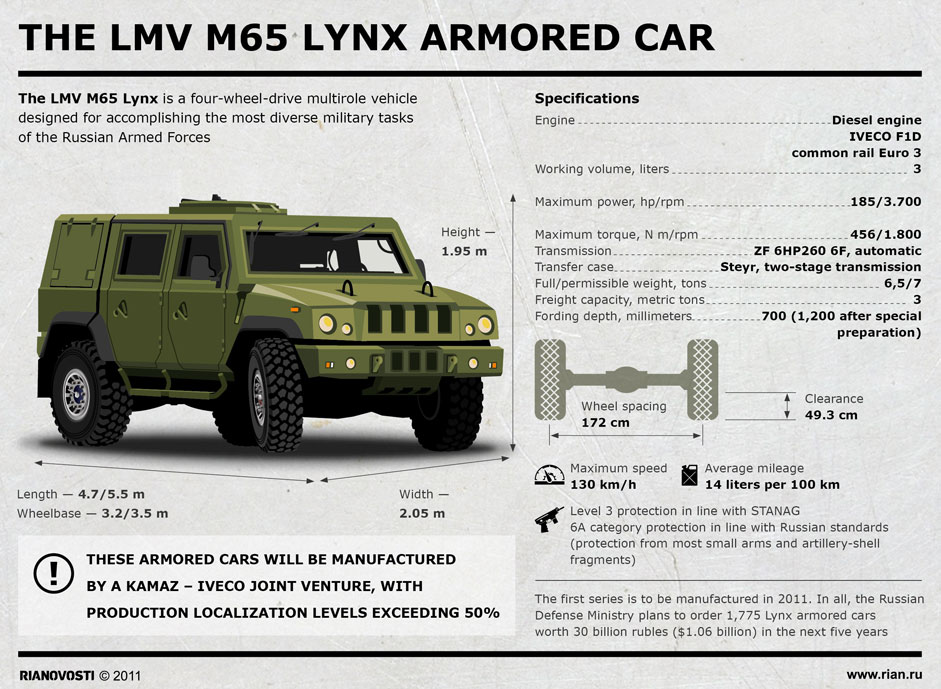 The vehicles are being purchased by a company called Garnizon, which was previously known as Oboronservis, but changed its name following the corruption scandal associated with the dismissal of Serdyukov. According to the company's annual report for last year, 81 Lynx assembly kits were imported into Russia in 2014 and another 94 were due to be delivered in 2015.

In 2015, according to tender documents published on electronic platforms, Russia's defense forces should receive 356 LMVs between mid-2015 and mid-2016.

All of the assembled vehicles go to one of the Ministry of Defense's reserve pools, from where some of the vehicles apparently have ended up in Syria. Their unsuitability there for washed-out or snow-covered roads is less of a factor, but their advantages – such as offering good protection for crews against roadside land mines – are very much in demand.