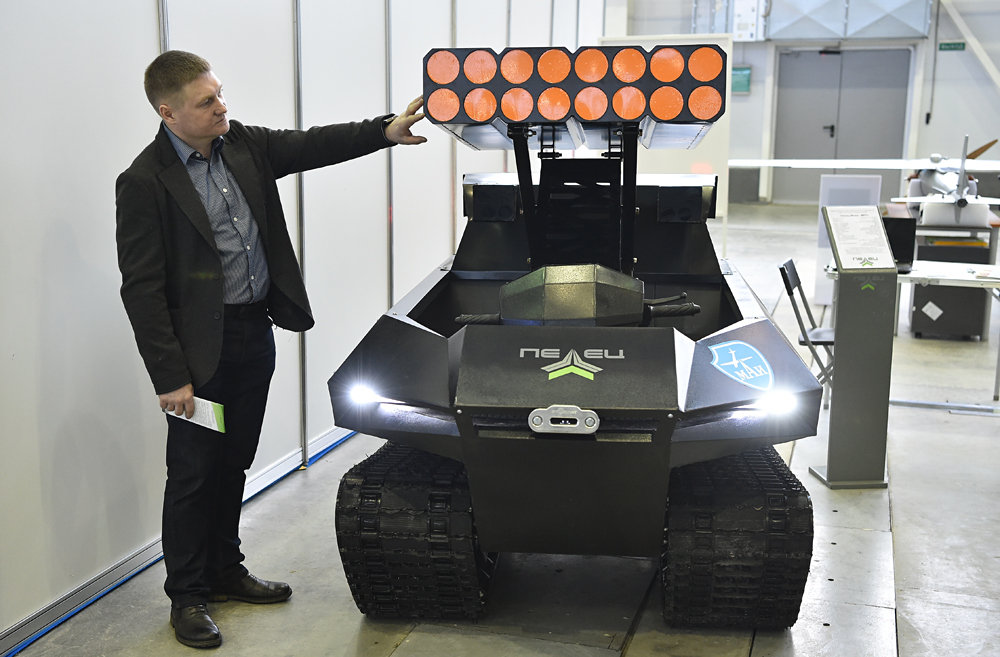 This rover is based on the Pelets-300 and Pelets-mini all-terrain vehicles. The platform is equipped with an intelligent automatic control unit. Robot rovers can be used in hazardous areas or as unmanned patrol vehicles.

Mikhail Sinitsyn
Robots are a part of daily life for Russia's armed forces, taking on hazardous and "dirty" work and forming a completely new type of army. In this article RBTH examines what the battlefield of the future will look like, what kind of role Russia's military robots will play and what they are capable of now.

The goal of Russia's ambitious Robotics 2025 program, adopted in late 2014, is to develop military robots for every environment – water, air and land, Deputy Head of the Russian Ministry of Defense’s Research and Innovation Department, Roman Kordyukov, told RBTH.

At present, common technical requirements and standards are being developed for the military robots. The issue of import substitution needs to be resolved, testing grounds have to be established and effective cooperation between the defense industry and the end user of the robotics – the Ministry of Defense – must be organized.

The new robotic systems are already undergoing testing and according to the head of Russia's Robotics Research and Test Center, Sergei Popov, they will enter service in 2016.

At an exhibition on robot automation and Russia's armed forces held in Moscow in February 2016 under the auspices of the Ministry of Defense, defense industry officials unveiled a series of robotic military attack systems. 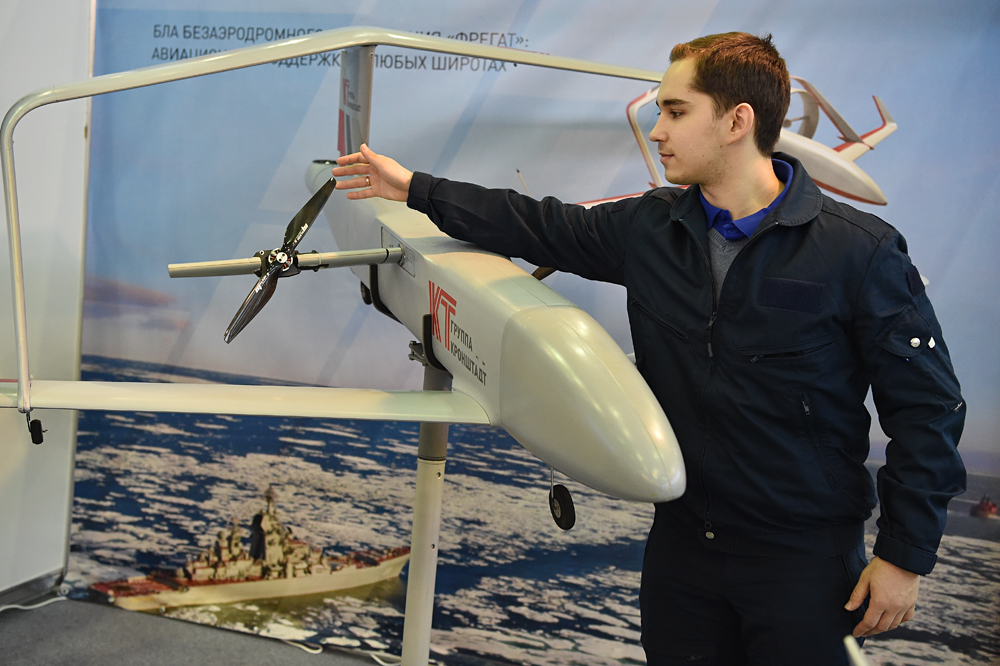 Mikhail SinitsynThe Fregat drone is still just a promising development. When it is fully realized it will carry a payload of 1-1.7 tons and will be able to remain in the air for about 10 hours. It will be capable of speeds up to 700 km/h. Serial production of this UAV will begin after 2022. 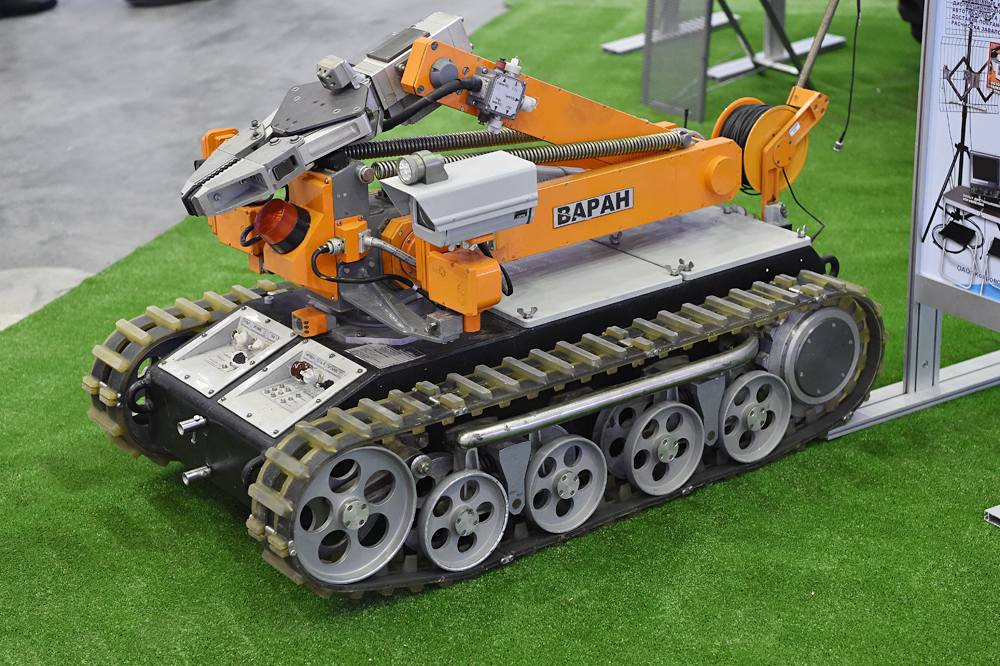 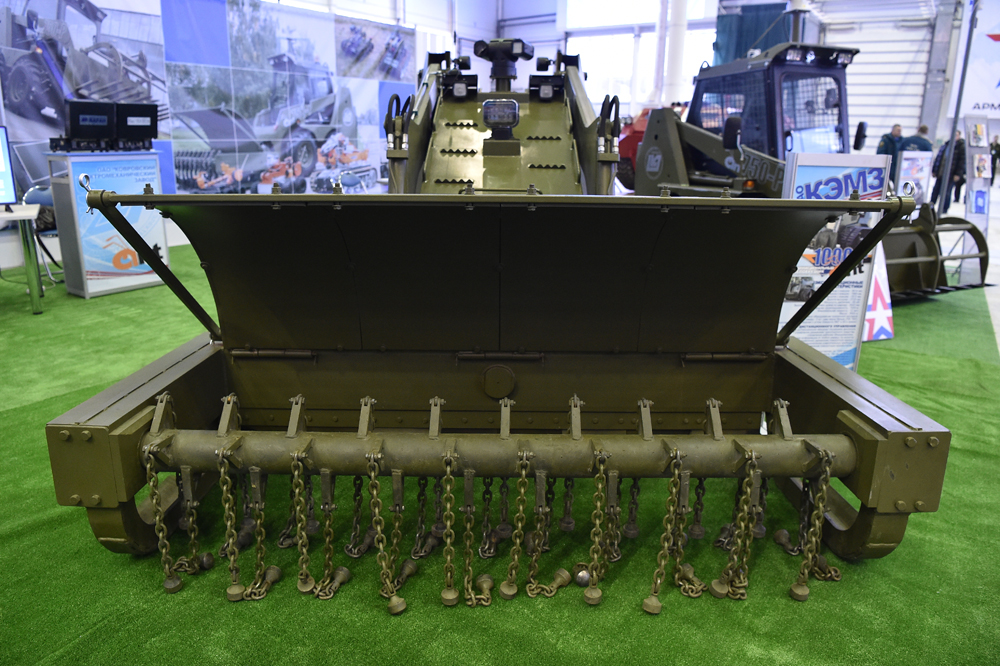 Mikhail SinitsynA multifunctional demining system that can replace 20 demining experts and carry out commands remotely. The operator can control Uran at a safe distance of up to one kilometer. 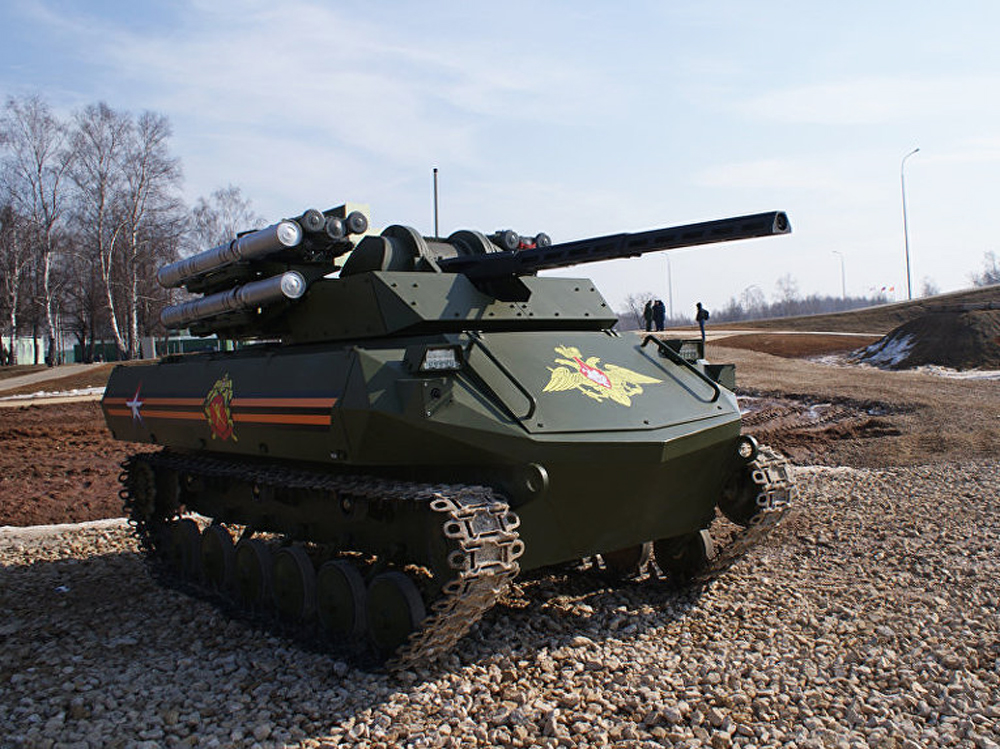 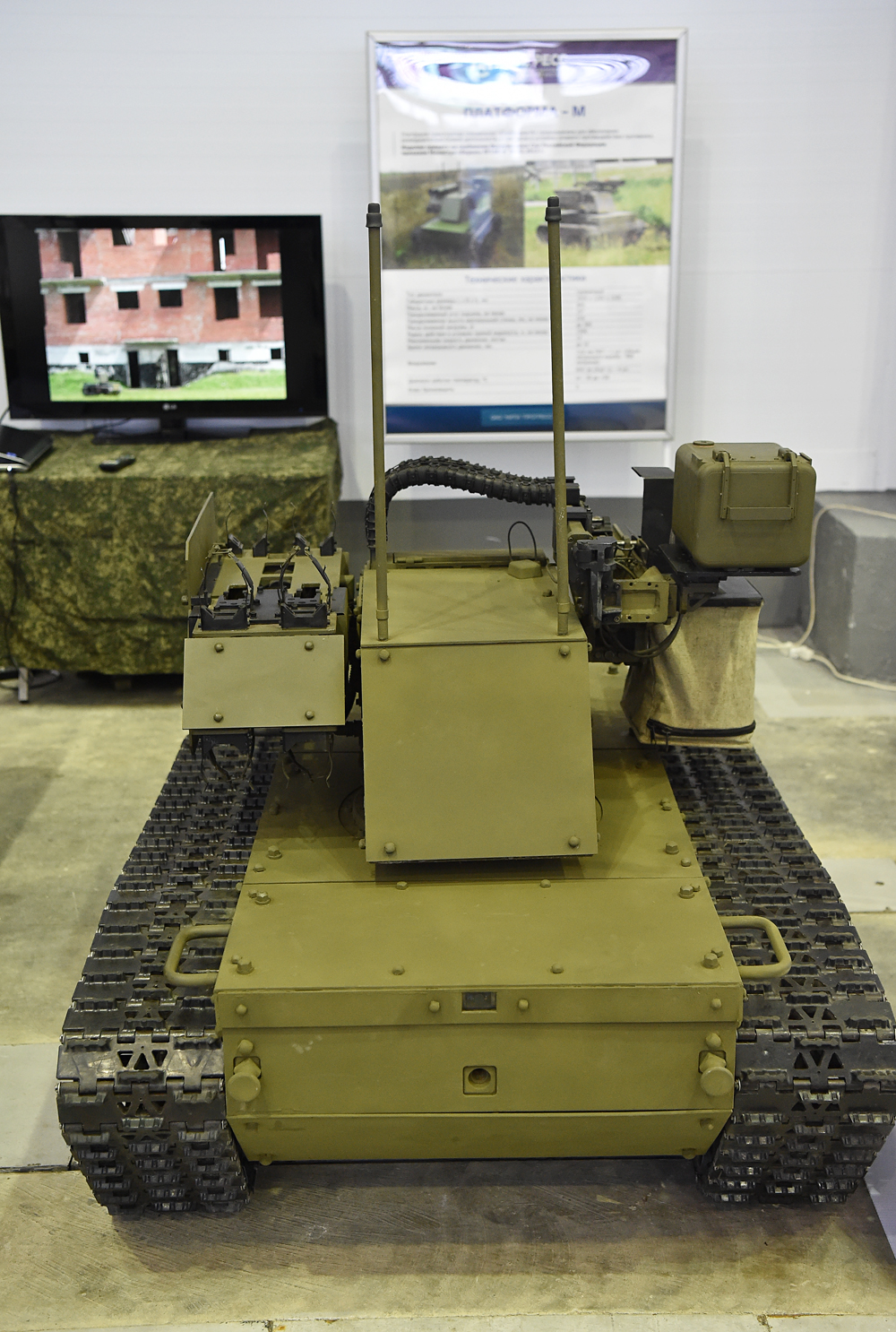 Mikhail SinitsynA robotic system designed for combat without coming into direct contact with the enemy. This is a universal combat unit that can act as a scout, a patrol or a guard for important facilities. 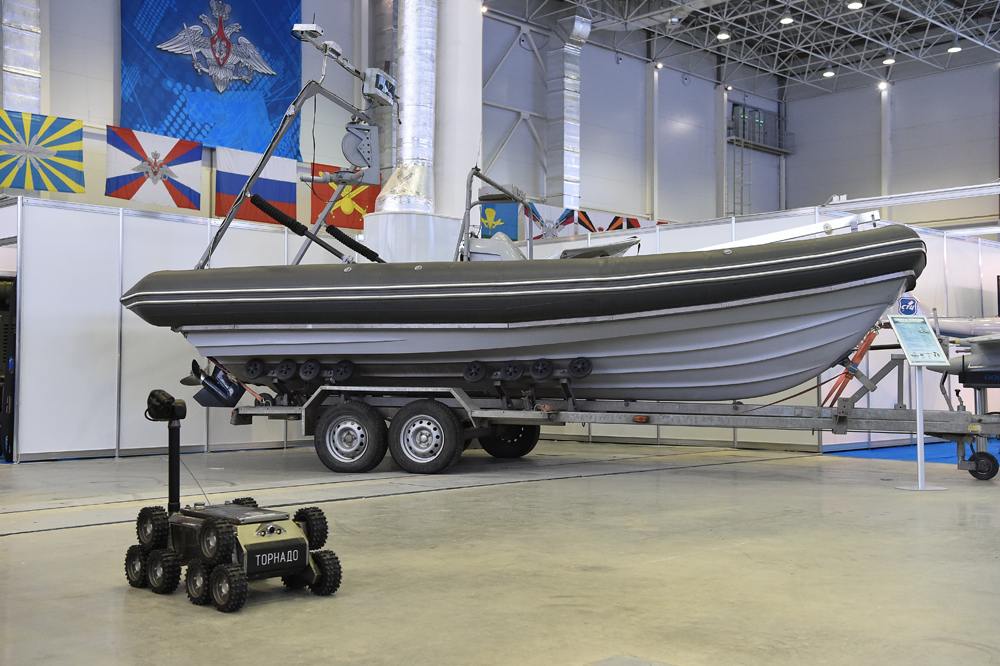 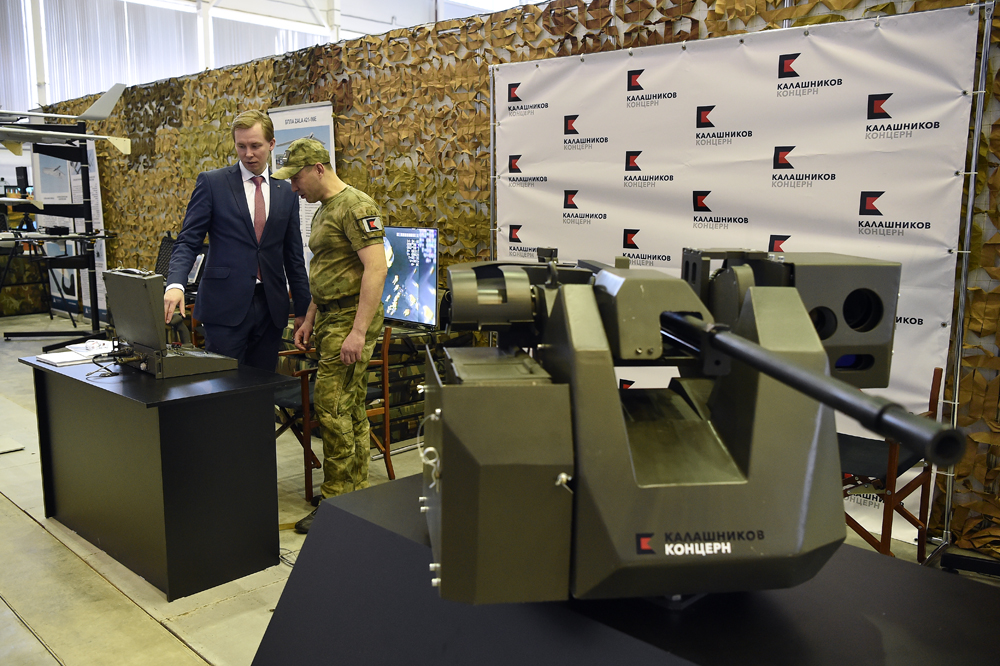 Mikhail SinitsynKalashnikov remote-controlled weapon station: \nIt can be used for equipping both ground armored vehicles and speedboats. The system is able to follow a selected moving target and engage up to 10 stationary targets. It has four types of weapons u2013 7.62-mm and 12.7-mm machine guns as well as 30-mm AH-17A and 40-mm automatic grenade launchers.\n

Mikhail SinitsynThe Fregat drone is still just a promising development. When it is fully realized it will carry a payload of 1-1.7 tons and will be able to remain in the air for about 10 hours. It will be capable of speeds up to 700 km/h. Serial production of this UAV will begin after 2022. 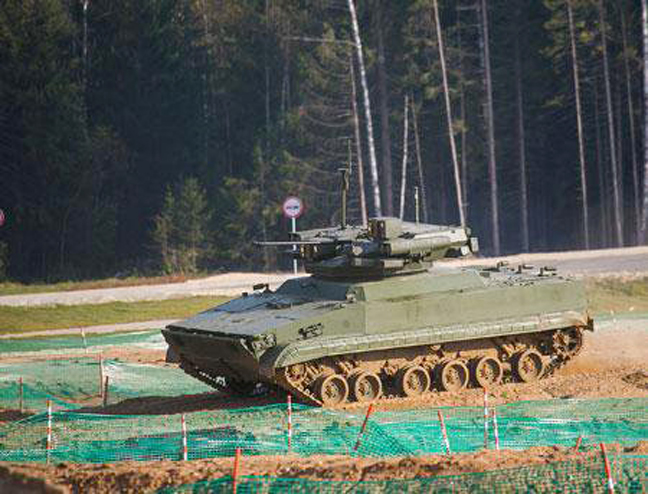 mil.ruA multifunctional robotic combat system based on the BMP-3 infantry fighting vehicle. It is designed for reconnaissance at any time of day, mine detection, evacuation of wounded personnel and combat support for troops. The system is equipped with a 30-mm automatic cannon, an automatic grenade launcher, a 12.7-mm machine gun and an anti-tank missile system. 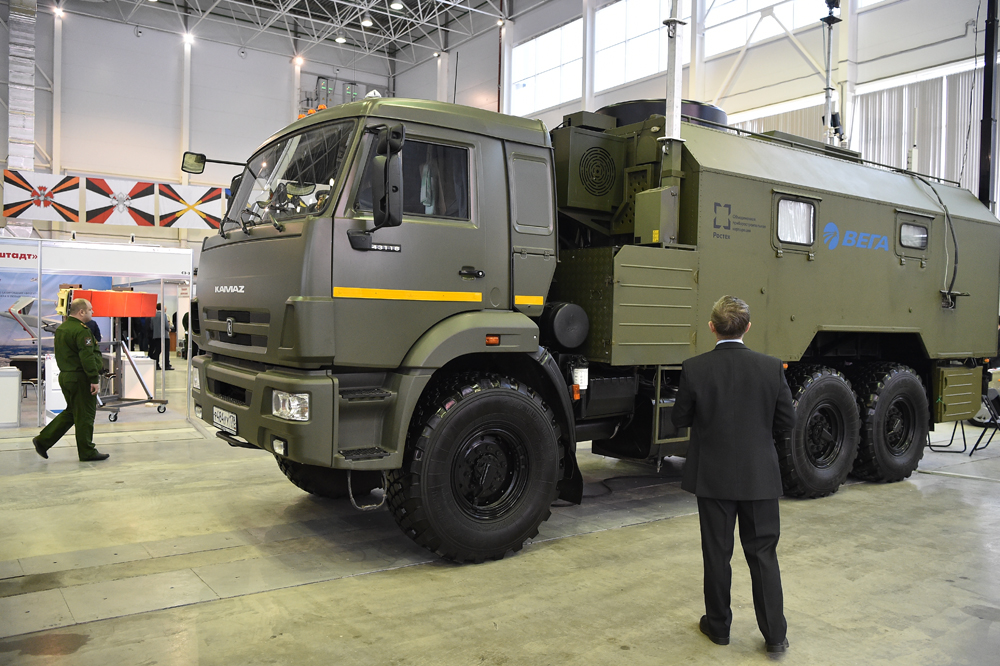 Mikhail SinitsynThe control system for unmanned aerial vehicles (UAVs) is capable of controlling 10 drones and ground robots simultaneously. The mobile command post has a deployment time of less than 15 minutes.
Mikhail SinitsynThis rover is based on the Pelets-300 and Pelets-mini all-terrain vehicles. The platform is equipped with an intelligent automatic control unit. Robot rovers can be used in hazardous areas or as unmanned patrol vehicles.
1/11

The United Instrument Manufacturing Corporation (UIMC) announced the airborne robotics complex Razvedchik (Scout), consisting of a robot helicopter, an observation helicopter, a reconnaissance helicopter and an attack helicopter with a grenade launcher. All of these aircraft can operate both as a group and individually. For example, they can follow their own route, establish their position, "talk" to the other drones, perform reconnaissance work and transmit data.

"The helicopter with the grenade launcher in the Razvedchik system is the first attack drone in Russia," UIMC's Leonid Khozin told RBTH.

The attack drone itself did not appear at the exhibition, but a video released by the company shows it flying and firing its grenade launcher. Whether or not it was supposed to hit a specific target is not clear. However, the fact that it fires straight shows that with a targeting system on board it could certainly become an accurate "marksman" and justify being called Russia’s first attack drone, even if only a "light" version of it currently exists.

The all-seeing eye of the Korsar

According to the UIMC, in 2016 Russia could acquire another attack drone, which is to undergo official testing this summer. It is called the Korsar (Corsair), a short-range unmanned aerial vehicle. Тhe project is so secret that there are no publicly available images of it. 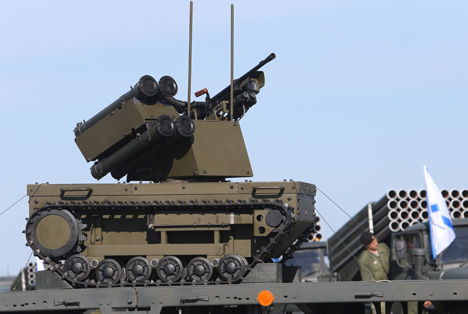 According to its developers, the unmanned aerial vehicle (UAV) is almost ready and is already flying and performing well.

The main function of the Korsar is surveillance, namely hyperspectral imaging, which will ensure that no one will be able to escape the drone's "sharp eyes." Nor will it be possible to deceive it using traditional methods of concealment, such as using inflatable mock-ups of military equipment. The drone will have the capability to detect any deception immediately and "see" the actual material and distinguish it from metal. Apart from a hyperspectral camera, the UAV could also carry other equipment including radar sets, electronic warfare systems and even weaponry.

"There is no attack version of the Korsar at the moment, but the possibility for it to have such a payload is there," says Khozin.