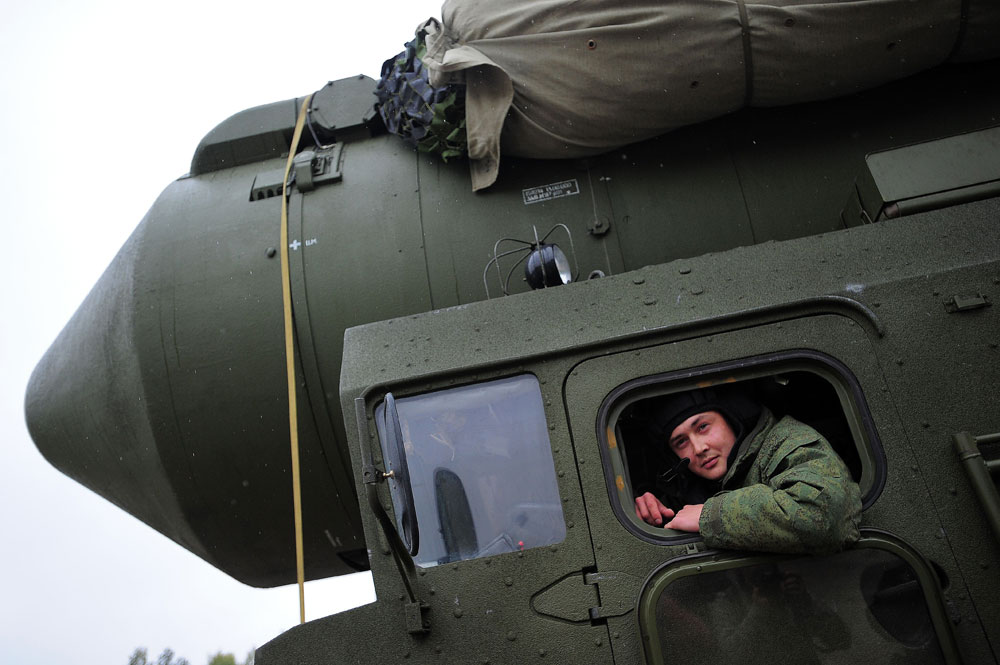 TASS
The Votkinsk Plant, located deep in Russia’s Ural Mountains, has been producing arms since the 18th century. In just under 250 years it has grown from a blacksmith and foundry into the producer of the whole range of Russia’s intercontinental ballistic missiles.

Intercontinental ballistic missiles, a key element of the nuclear triad, remain the mainstay of Russia's nuclear deterrent forces to this day.

Based in silos and on mobile launchers, they stay on alert 24 hours a day across the vast territory from the Baltic Sea to the Pacific Ocean.

The missile shield is a guarantee of security for the country, and a whole military industry was established in Russia to serve it.

The main part of Russia's missile shield is the Votkinsk Plant, located in the foothills of the Urals.

During the single military products acceptance day, held under the chairmanship of President Vladimir Putin on March 11, 2016, the plant was appreciated among the most successful enterprises in the industry.

Home of Topols and Iskanders

The Votkinsk Plant is one of the few Russian companies engaged in the production of intercontinental ballistic missiles, and the only one to manufacture the whole range of carriers employed by the Russian army.

These are the main land-based missiles Topol-M and Yars as well as the Bulava missile, which was created for nuclear submarines, and the Iskander-M system – the newest tactical system for land forces.

The production of this complex technology is ensured by the advanced technical base, which is unique in Russia. In fact, the Votkinsk Plant is a generic name for several facilities including metallurgy, tool assembly and welding.

Together, they form a whole industrial area, surrounded by a city with a population of 100,000 people, with one in 10 residents working at the plant.

Until recently, the plant's many facilities were technically obsolete, but they have undergone a major modernization in recent years. A new thermal plant, where the hardening of the plant's whole production takes place, has been put in operation.

After the production upgrade in 2012, it was equipped with new electric furnaces, whose installation costs totaled $10 million. Metal cutting is carried out with the help of modern nanotechnology.

The metal casting laboratory produces high quality alloys that are used in the production of missiles. All these innovations have significantly increased the reputation of the Votkinsk Plant's products, almost completely eliminating the possibility of technical defects in recent years.

The modernization opened up new niches for the enterprise, which until now had nothing to do with its military production. Nevertheless, it previously manufactured some products for civilian use as well, including more exotic items such as baby strollers.

Defense industry conversion in the 1990s forced the plant's staff to develop fundamentally new directions. Today, its products include machinery and equipment for oil and gas and nuclear industries.

Today's modern facilities have little resemblance to the blacksmith and foundry workshops that started the history of the Votkinsk Plant in 1759.

Launched as a private company, it was located in an area rich in forests, which provided cheap fuel, and crossed with deep rivers, which served as convenient transport connections.

Bombs away: Converting the Tupolev bomber giants for civilian skies>>>

Soon the plant was transferred to the state, and, for the next 100 years, it specialized in producing high-grade armor steel. In 1858, its masters produced the metal spire for the Peter and Paul Cathedral in St. Petersburg, which has not been replaced ever since.

At the turn of the century, the plant became the center of military engineering, but it was during the Soviet years that it experienced its peak.

Until the mid-20th century, it was always the leading domestic artillery arsenal. Cannons manufactured by Votkinsk workers were actively employed by the Soviet army.

After 1957, the enterprise's capacities became involved in missile production. When the Intermediate-Range Nuclear Forces Treaty was signed in 1987, the Votkinsk Plant was specifically mentioned in the text of the agreement; the U.S. side has the right to carry out regular inspections of the plant's facilities and monitor its strategically important production.

Today, the Votkinsk Plant is still owned by the state and is one of the key participants in the implementation of the state defense order. Since 2013, it has nearly doubled the production of ballistic and tactical missiles.