U.S.-Russia Baltic Sea incident: Was there a risk of a military clash? 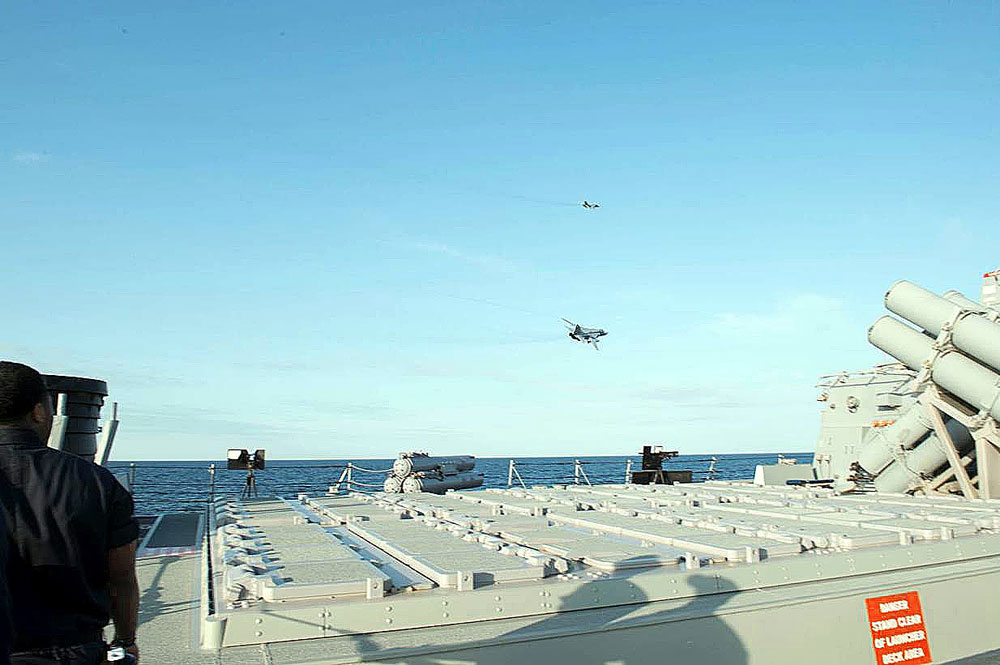 In this photo provided by the U.S. Navy, two Russian Sukhoi Su-24 attack aircraft make a low altitude pass by the U.S.S Donald Cook in the Baltic Sea.

AP
The “buzzing” of an American destroyer in the Baltic Sea on April 11 and 12 by Russian Su-24 bombers led to a stormy reaction in the U.S., with Washington stating that the ship had the right to shoot down the Russian warplanes. Would this have led to a full conflict? RBTH answers this and other questions about the incident.

On April 11 and 12 the American destroyer U.S.S. Donald Cook was conducing joint drills with Poland in neutral waters in the Baltic Sea, when it was repeatedly “buzzed” by Russian Su-24 planes, which flew by the warship at extremely close range.

The European command of the U.S. Armed Forces expressed "deep preoccupation" about the incident, adding that, "the Russian air maneuvers were unsafe and unprofessional." The White House also condemned the incident.

The Russian planes were not carrying ammunition or devices capable of damaging the destroyer's electronic systems.

On April 13 the Pentagon published a videoof the incident, showing the Russian warplanes passing just meters from the ship in what the U.S. Defense Ministry described as "aggressive” behaviour.

In turn, the Russian Defense Ministry said it was surprised about "our American colleagues' painful reaction," adding that the Russian planes had been conducting planned test flights over neutral waters in the Baltic Sea.

The ministry also emphasized that the American ship had been navigating only 45 miles (70 km) from the strategically sensitive Russian naval base in the Kaliningrad Region, the Russian exclave on the Baltic coast.

After discovering the ship, claimed the ministry, the Russian pilots "turned away from it, following all safety measures."

Why did the Su-24s approach the American ship?

Officially, the Russian bombers were just conducting a planned test flight. But Russian observers believe that the incident occurred because the American destroyer was “close” to a Russian military base, despite the fact that it was in international waters.

According to retired colonel Leonid Ivashov, president of the Moscow-based International Center for Geopolitical Analysis, in the navy this is called "pushing out" – when one ship squeezes out another ship at a safe distance.

In this case, the Russian planes could have been "pushing out" the American ship away from the Russian military base, he said.

Mikhail Alexandrov, a leading expert from the Center for Military-Political Studies at the Moscow State Institute of International Relations, pointed out that Russian ships do not come that close to American bases located along the U.S. coast.

What would have happened had the Russian planes been shot down?

The Russian Federation Council, the upper chamber of the Russian Parliament, stated that Russia's reaction would have been "harsh" if the U.S.S. Donald Cook had shot a plane down.

Igor Morozov, a member of the Russian Federation Council’s international affairs committee, noted that having “approached the Russian border,” the American destroyer could have "remained there."

Experts differ in their opinions of what the Russian reaction to the hypothetical downing of the planes would have been.

According to Mikhail Alexandrov, the most likely scenario is that the Russian military would have sunk the destroyer as a response to the downed plane. However, he does not think this would have led to a full-scale war – the two sides would have attempted to localize the conflict.

Leonid Ivashov, on the other hand, has a different view: "I think that the highest Russian authorities would have acted the way they did after Turkey's air force shot down the Russian Su-24 bomber over Syrian territory [on Nov. 24]. Russia's highest military-political command would have completely broken relations with the West rather than retaliating militarily," he said.

How will the incident affect U.S.-Russian dialogue?

Following the incident the actions of the Russian pilots were condemned not only by the White House, but also by the State Department.

"The action is reckless. It is provocative. It is dangerous. And under the rules of engagement that could have been a shoot-down," said U.S. Secretary of State John Kerry following the incident.

A State Department spokesman said that Kerry will discuss this incident with his Russian counterpart Sergei Lavrov.

Alexandrov, however, believes that the diplomats are more likely to discuss issues of interactivity between the countries' military. According to him certain “rules” were established back in the Soviet era, but the U.S. has since “apparently forgotten” about them.