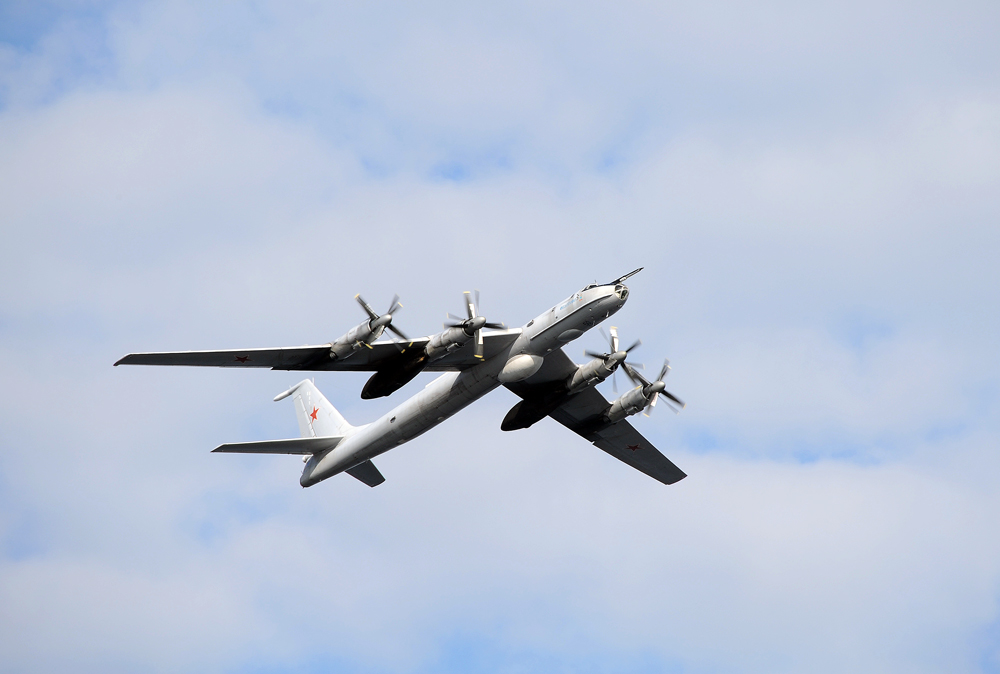 Tu-142 aircraft are based on the well-known Russian long-range Tu-95 bombers.

Michael Klimentyev / RIA Novosti
A Russian anti-submarine Tu-142 aircraft has been first spotted in the Syrian sky. What was it doing over Aleppo?

A Russian military aircraft that had not previously appeared in Syria was spotted by locals near the city of Aleppo. The aircraft observed is the long-range anti-submarine aircraft Tu-142. This aircraft series, which is known for attacking nuclear submarines, is often referred to as the “Bear” by NATO. The video, which shows the reconnaissance aircraft with a low hum typical only for the Tu-95 aircraft, was first posted on The Aviationist website.

It is likely that the plane was spotted by residents in Idlib, a suburb of Aleppo located about 40 kilometers away from the country's industrial center.

Tu-142 aircraft are based on the well-known Russian long-range Tu-95 bombers, which were already used in Syria against the Islamic State terrorist organization.

Despite the fact that the attacks on Syrian targets involved ships of the Caspian Flotilla and that the group is supported by the Black Sea Fleet, Russian anti-submarine aircraft were not observed in the region until recently.

Externally, the Tu-142 has almost no discernable differences from the standard Tu-95 bomber. However, the Tu-142 could be identified in the video by its characteristic elongation at the top of the keel, which is present only in the anti-submarine version of the Tu-95.

These aircraft are based in the Northern and Pacific fleets. During Soviet times the Black Sea Fleet's arsenal contained a group of this aircraft, but the Ukrainian authorities, which inherited these planes, were no longer using them by 2006. In addition, eight export-version Tu-142MEs were supplied to India.

It can land directly on an airstrip

Tu-142 planes are usually fitted with very powerful NK-12MP engines. Another difference separating them from the Tu-95 series is the strengthened landing gear that allows the aircraft to land on prepared airstrips.

"The aircraft carry a vast array of antennas, which are hanging from it like decorations on a Christmas tree,” Alexei Leonov, a military expert of the Arsenal Otechestva (Fatherland's Arsenal) magazine told Gazeta.ru. "To identify objects under water, planes drop radio beacons. A radio beacon operates on the principle of passive and active detection of the target, it listens to what is going on under the water, transmits the information to the aircraft and, after finishing work, self-destructs."

The appearance of the Russian anti-submarine aircraft in the skies of Syria may be due to the recent attack against ISIS carried out by the U.S. Air Force from an aircraft carrier located in the Mediterranean Sea. This is apparently the first such operation by the U.S. military since 2003.

What is happening in the sea?

Looking deeper at the situation and it becomes clear that the logistics are quite complicated.

"Our warships are stationed at the Tartus [Russian naval] base in Syria," Leonov said. "Naturally, NATO ships are operating in the Mediterranean Sea at the same time, and include not just surface vessels, but also submarines. It is difficult for ships to determine what is happening in the sea, while standing near the shore. This can be done by the Tu-142, which was created primarily to detect surface and submarine forces; no wonder it was called the Sea Hunter, along with the Il-38. However, in contrast to the IL-38, the Tu-142 carries anti-ship missiles. In other words it can hurt a surface ship, too, if it behaves badly."

It is difficult to say what route the Tu-142 took to get in Syria, since military aircraft usually do not switch on transponders, by which they can be tracked on websites such as Flightradar.

"It was not observed on Flightradar24 and the TU-95 and 142s have not shown up on our site at all," David Cenciotti, an aviation expert and the editor of The Aviationist website site told Gazeta.ru.

Meanwhile, the man, whose voice is heard off-screen in Arabic, says in Arabic that he is seeing such aircraft "for the fifth time."