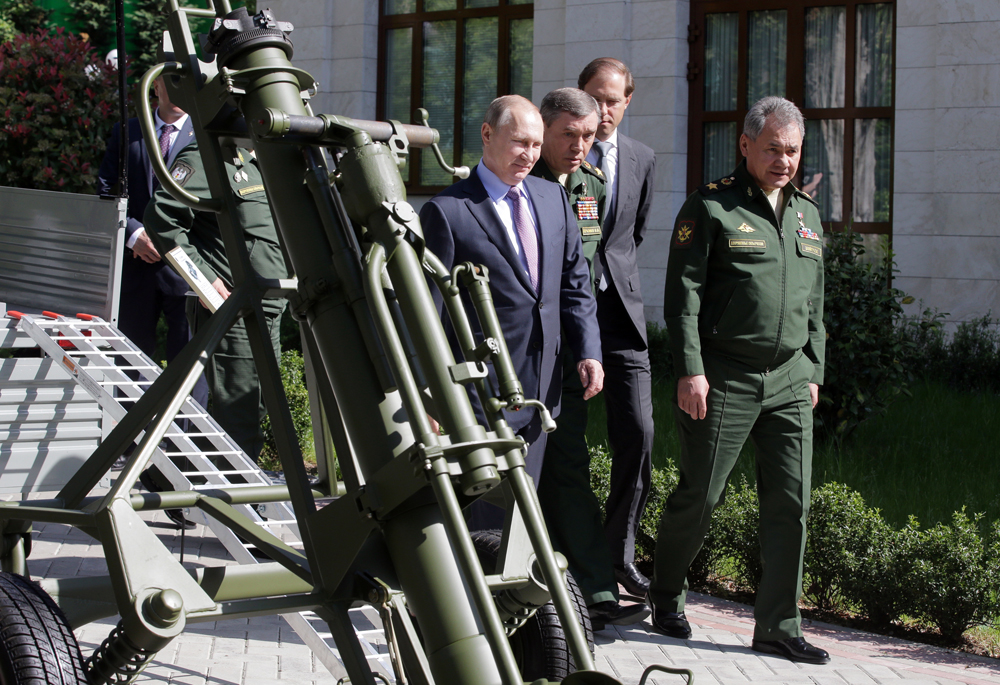 Mikhail Metzel/TASS
Russia has launched its first snap check of arsenals and depots for military equipment. Also assessed will be the readiness of a number of military control points, as well as the actions of the troops in emergencies, including technical disasters.

President Vladimir Putin has ordered an unannounced inspection of the combat readiness of Russia’s armed forces. The check, announced by the Kremlin on June 14, will continue through June 22, with instructions being given to notify the military attaches of foreign countries.

According to Defense Minister Sergei Shoigu, in addition to the traditional training of the troops, particular attention will be paid to the mobilization component, the state of reserve units and the stocks of weapons and military equipment in storage. Separately, Shoigu asked that the safety and security of weapons and ammunition be ensured.

"A number of weapons and equipment storage depots, as well as some control military points are subject to check," he said.

Arsenals checked for the first time

Shoigu introduced the practice of snap checks in the summer of 2013. Since then, snap exercises have been held several times a year, but mostly they have been aimed at practicing rapid troop movements over long distances, as well as direct combat missions. This is the first time a special large-scale comprehensive check of arsenals is being held in Russia.

According to Alexei Leonkov, a PhD in Military Sciences and expert for the Arsenal Otechestva (“Arsenal of the Fatherland”) magazine, a large number of storehouses are a legacy of the Soviet era, which in case of war were to equip the military, with many of them now located in Eastern Europe.

"The logic for placing storehouses was such: When there was the Warsaw Pact – these were front-line positions, which would meet the enemy," said Leonkov. "Moldova, Ukraine, Belarus and the Baltics – there were major storehouses to equip the armies there.

"Then there were warehouses in the area of the Urals, the Altai, the Irkutsk Region, which were out of reach of nuclear missiles, as well as weapons storehouses along the border with China.

“There are also storehouses in the Far East, including a huge storehouse in the area of Chita and Irkutsk, with lots of military vehicles, including trucks, tracked vehicles and transportable artillery – this can form an entire field army. Storehouses were sufficient to be able to form at least two field armies for each direction of attack."

‘When something goes boom’

According to Leonkov, in the USSR these checks of arsenals were held on a regular basis, but the Soviet Union has not existed for 25 years, and since then checks have been carried out only "when something goes boom" over the years.

"Such large-scale checks – this is prevention, which should be done at least twice a year, when the equipment is put into storage (before winter and summer)," added Leonkov.

Between 2011 and 2015 alone, there were about 20 accidents in Russian military storehouses. For example, in 2012, three explosions occurred at an ammunition depot in the Orenburg Region (4,000 tons of shells), with 20 pieces of equipment destroyed as a result.

The territory of a military unit located 200 miles to the north-east of Vladivostok where a fire caused detonation of artillery shells in the unit's ammunition depot, May 2012. Source: RIA Novosti

On another occasion, an artillery storehouse caught fire there, affecting an area with a radius of more than 3 km (2 miles) comprising eight settlements.

"As far as I remember, no one was seriously engaged in dealing with it before Shoigu, they only reacted to accidents," said Leonkov.

Sophisticated equipment is not produced in large quantities

It is particularly important to assess the state of arsenals since defense plants do not produce sophisticated equipment in large quantities today. For example, one plant produces up to 30 military aircraft a year.

"Should anything happen, the plant will not be able to meet the demand. Therefore, there are storehouses that can meet the needs of the army for the first period in the event of a surprise attack, when there are very large losses, while the economy is being placed on a war footing," said Leonkov.

In this situation, a check of arsenals, including in emergency situations, can be very useful. Especially given the fact that ammunition has been actively spent for nine months during the operation against the militants in Syria.

The Russian military will carry out more than 2,000 different exercises by Dec. 1. The Defense Ministry plans to conduct up to 50 percent of exercises in the coming six months under night-time conditions.