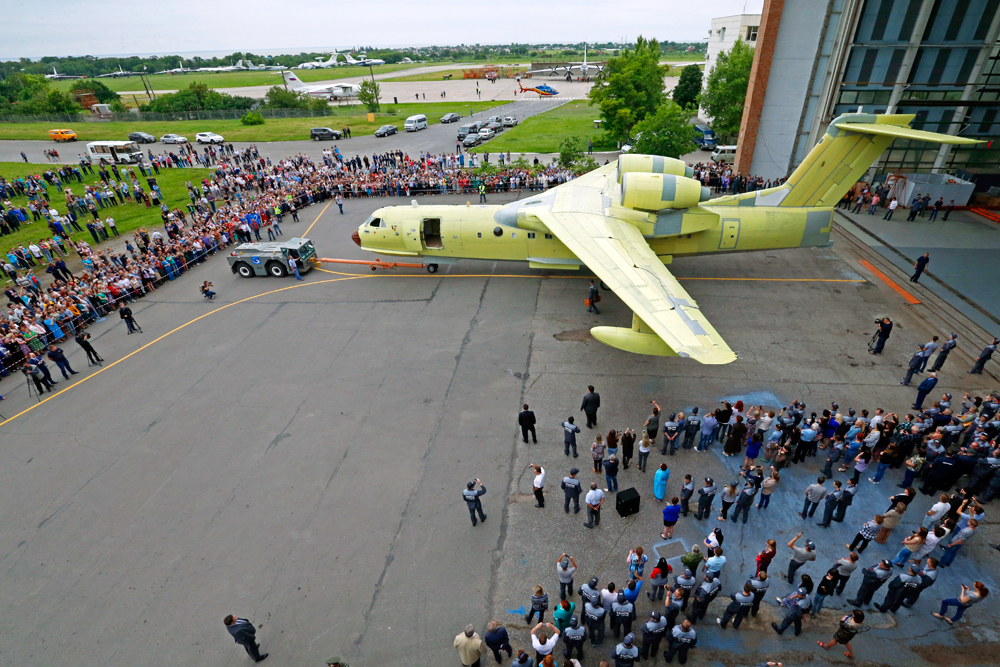 The unveiling ceremony for a Beriev Be-200ChS amphibious aircraft, modified for the Russian Emergency Situations Ministry at the Beriev Aircraft Company, May 30, 2016.

Valery Matytsin/TASS
The aviation factory in Taganrog has begun the production of the first serial BE-200ChS amphibian plane for the Russian Ministry of Emergency Situations.

Russia has begun producing a new rescue plane for the Ministry of Emergency Situations. The BE-200ChS model has been modernized at the aviation plant in Taganrog (700 miles south of Moscow) to conform to today's needs and has become the first serial amphibian plane in Russia.

Initially there were many different construction models and objectives for the future aircraft. At one point there were discussions with the Rolls Royce company about producing engines for promoting the model in the Western market.

However, the Russian Defense and Emergency Situations Ministries decided to leave production for domestic entrepreneurs in order not to be hostage to political issues.

Valery Matytsin/TASSThe unveiling ceremony for a Beriev Be-200ChS amphibious aircraft, modified for the Russian Emergency Situations Ministry at the Beriev Aircraft Company, May 30, 2016.

Marina Lystseva/TASSA cockpit of a Beriev Be-200ChS amphibious aircraft, modified for the Russian Emergency Situations Ministry at the Beriev Aircraft Company, at the unveiling ceremony, May 30, 2016.

RIA NovostiRussian EMERCOM officers inside a Beriev Be-200 aircraft during an operation to examine the area of wreckage of the Dalny Vostok trawler in the Sea of Okhotsk, April 4, 2015.

ReutersRussian Prime Minister Vladimir Putin and his Italian counterpart Silvio Berlusconi sit in a boat as they look around the jet Be-200 during their meeting in St.Petersburg, October 23, 2009

Alexei Pavlishak/TASSA Beriev Be-200 multipurpose amphibious aircraft seen during Russia&#39s emergency situations ministry forest fire exercises with the involvement of aviation near the village of Krasnokamenka, Crimea, May 27, 2015.
1/6

According to military observer at the Izvestiya newspaper Dmitry Safonov, this step helped the producer avoid the consequences of the sanctions against Russia, but limited deliveries of the plane to foreign markets.

"The decision to create the BE-200ChS completely out of domestic components prevents the plane from entering the Western market since the supply of spare parts will be too costly for the buyer. For now the aircraft is available on the Russian and Southeast Asian markets," said Safonov.

In his words, the aircraft's final payload is 8,000 kg, plus 12 cubic meters of water (12 tons) in tanks for putting out fires.

"The amphibian plane's main feature is that it collects water as it lands, fills the tanks and takes off right from the water body,” said Safonov, adding that for this reason Russia's clients will be countries with wide rivers and reservoirs, “since salty water would damage the trees while putting out the fires."

Onboard capacity – up to 64

Payload – 8,000 kg of cargo plus 12 cubic meters of water in its tanks (it contains 8 sections of water tanks that can be either simultaneously or successively unloaded);