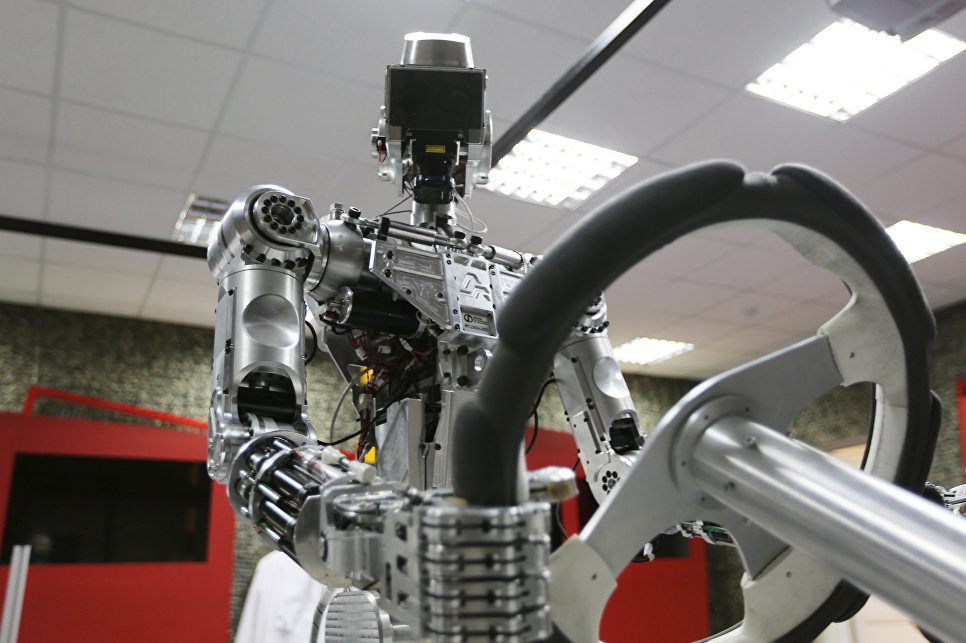 "I see greater robotization. Basically the war will be between operators and machines and not between soldiers on a battlefield," says Andrei Grigoryev. Photo: Technology platform to create a humanoid robot.

Press Photo
Andrei Grigoryev, director of the Foundation of Future Research, talks about what future weapons will look like and describes the wars that will include combat robots and multimedia attack drones, while soldiers become mere operators.

When should we expect the appearance of a combat robot prototype?

Andrei Grigoryev: The foundation does not aim to create combat robots and their systems. This is our clients' objective – the Defense Ministry, the FSB, the Ministry of Emergency Situations and so on.

Our aim is to create the avionics without which robots cannot function: the instrument base, communications, technical vision, energy, the engine, collective management systems, the interactivity between the operator and the machine and everything else.

The Defense Ministry knows better in what form it needs the robot. But the principle constructor that will develop it will not make the robot from scratch. They'll have a "Lego" set out of which they'll quickly build a machine that the client needs. That is the foundation's objective.

The existing Nerekhta combat robot is basically the prototype of our future combat platform. This is not what we are creating for the Defense Ministry, this is a combat platform that we will expand thanks to the development of existing key technologies.

Have you planned the project based on the Ratnik new-generation development, the ‘soldier of the future’?

A.G.: It is the Defense Ministry that is working on Ratnik-2. We are actually working on Ratnik-3. We call this project "the Legionnaire," but in the future, when the project finishes, it may be called something else.

New generations of satellites are Russiau2019s cosmic eyes and ears

In essence, for the first time we are constructing our soldier's firing weapons and personal protection as a big comprehensive system, which includes weapons, communication systems, protection from shrapnel and bullets and high-quality equipment that will help him feel comfortable in all atmospheric conditions.

This system includes mechanisms for feeding the soldier, medical resources, evacuation methods and resources for diagnosing and effectively treating the soldier independently of his whereabouts.

We are considering the possibilities of telemedicine and medical robots so that high-quality doctor assistance can be obtained everywhere, so that operations and treatments can be planned for a soldier located in another continent. Doctors can be substituted by robots that can perform the necessary operations.

Press photoA technology platform for the creation of a humanoid robot

How do you envision the future battlefield?

A.G.: I see greater robotization. Basically the war will be between operators and machines and not between soldiers on a battlefield who shoot at each other. Military objectives will be achieved with minimal personnel losses. The soldier will gradually turn into an operator and distance himself from the battlefield.

What does the future hold for pilotless motorboats and tanks?

A.G.: We believe that the future belongs to pilotless systems. Moreover, they will be multifunctional and multimedia systems, not just land and air, the categories into which they are divided today. These will be powerful robotized divisions that will fight on land, in the air, in the water and underwater and in space. And all this will be integrated into large single reconnaissance-attack systems.

How many projects is the foundation developing at the moment?

A.G.: Our projects are divided into two parts: There are 46 large ones and there are smaller pilot projects that cost 3 million rubles [$45,000] and in which we are developing tactical-technical resources and trying to understand if they can be realized from the technical-economic viewpoint.

Which projects are close to being completed?

A.G.: We have openly begun testing the Gerbary project, systems for collective development of engineering software. We are also finishing the joint Systema 112 project with the Ministry of Emergency Situations.

Later our laboratory will try to deal with the challenge of identifying forms in order to substitute the enormous number of operators who follow emergency situations in observation chambers with automatic systems.

Also, an entire series of confidential projects is coming to a close. We regularly inform the Russian government about our work.