Russian airplanes leave Iran, but for how long? 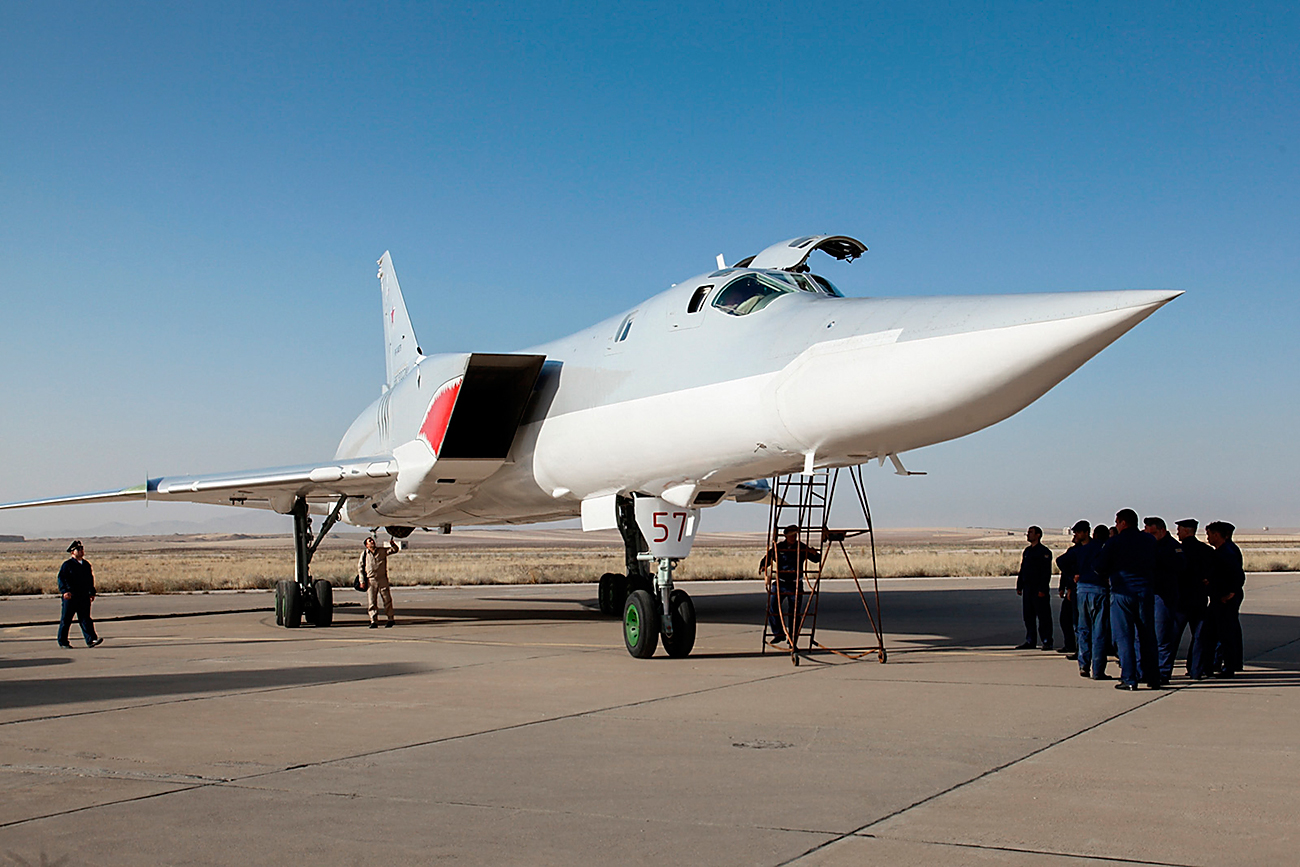 A Russian Tu-22M3 bomber stands on the tarmac at an air base near Hamedan, Iran. Russian warplanes took off on Tuesday Aug. 16, from Iran to target Islamic State fighters and other militants in Syria, widening Moscow's bombing campaign in Syria.

AP
Tu-22M3 and Su-34 combat aircraft are no longer performing sorties into Syria from Iranian territory. Experts attribute the decision to a number of diplomatic and technical miscalculations on Moscow’s part and say the possibility remains for Russian aircraft to return.

Russian combat aviation will no longer be using Iran’s Hamadan air base in the fight against Islamic State militants in Syria, according to an announcement made on Aug. 22 by Russian Defense Ministry spokesman Maj.-Gen. Igor Konashenkov.

In his statement, Konashenkov said that the tasks set for the Tu-22M3 long-range bombers and Su-34 strike aircraft flying from the base have been accomplished. The aircraft that performed sorties from Hamadan have returned to Russia.

Konashenkov left open the possibility that the Iranian airbase may be used again, however, depending on the situation in Syria.

Experts say that Russia’s use of the air base and subsequent quick withdrawal from it is tied to a breakdown in relations between Moscow and Tehran.

According to military analyst and deputy head of the CIS Institute Vladimir Yevseyev, Tehran was irritated by the failure of Russian political leaders to agree on their public statements with their Iranian counterparts.

“Tehran is a very tricky partner, and information for the media needs to be released jointly. They should have organized a media appearance by Iranian Ambassador to Moscow Mehdi Sanayee and Russian Foreign Minister Sergei Lavrov with a joint statement about the use of the airbase. Instead, what we did was to unilaterally give the information to the media via the military,” Yevseyev said.

In one statement indicative of the relationship, after the news that Russia aircraft were deployed in Iran was made public on Aug. 16, Iranian Defense Minister Hossein Dehghan told the Associated Press: “Russians are interested to show they are a superpower to guarantee their share in political future of Syria and, of course, there has been a kind of show-off and ungentlemanly (attitude) in this field,"

There are other reasons for the recall of Russian bombers, however. For one thing, any discussion of a settlement in Syria must involve Saudi Arabia, Iran’s regional rival.

“During Geneva-3, Russia will need to hold talks with all the participants in the conflict, both with Western partners and with the Syrian opposition. For all the parties, the use of the Iranian airbase by Russian aircraft is an irritant of sorts,” Yevseyev said.

Additionally, there were technical problems in the use of Hamadan. Russian bombers had been using the Iranian base for refueling during the transport of hardware to the Hmeimim airbase in Syria before the start of the operation there last fall without incident.

“Originally, the base was used as a staging airfield to refuel our aircraft. The same happened [now] in the case of Tu-22M3, which made a stopover there to have some technical work done and to set off on their combat missions,” said Nina Mamedova, head of the Iran section at the Russian Academy of Sciences’ Institute of Oriental Studies.

After the first two days of sorties in August 2016, however, a number of technical problems arose. According to Yevseyev, several steps would have to be taken to ensure the full-fledged operation of the Russian aircraft — including the setting up of a command post in Iran with the relevant communication channels and the construction of a hangar to store ammunition for the Tu-22M3 aircraft, which also would need to be serviced and guarded.

Finally, the question of the status of Russian troops serving in Iran would need to be resolved.

“In case there is any incident, serious problems would ensue. They do not have diplomatic immunity as our soldiers in Syria do,” Yevseyev said.

One solution might be for Russia to formally lease and use the airbase, but this would require the parliaments of the two countries to adopt a treaty specifying all the technical and diplomatic aspects of Russian’s presence in Iran, including the status of its diplomats.

Just a matter of time

Nevertheless, analysts see the withdrawal of the Russian contingent from Hamadan as a temporary measure.

Experts say that use of the Hamadan air base by Russian troops in the future will require further painstaking diplomatic work, but they note that if the crisis worsens, aircraft will be deployed there immediately.