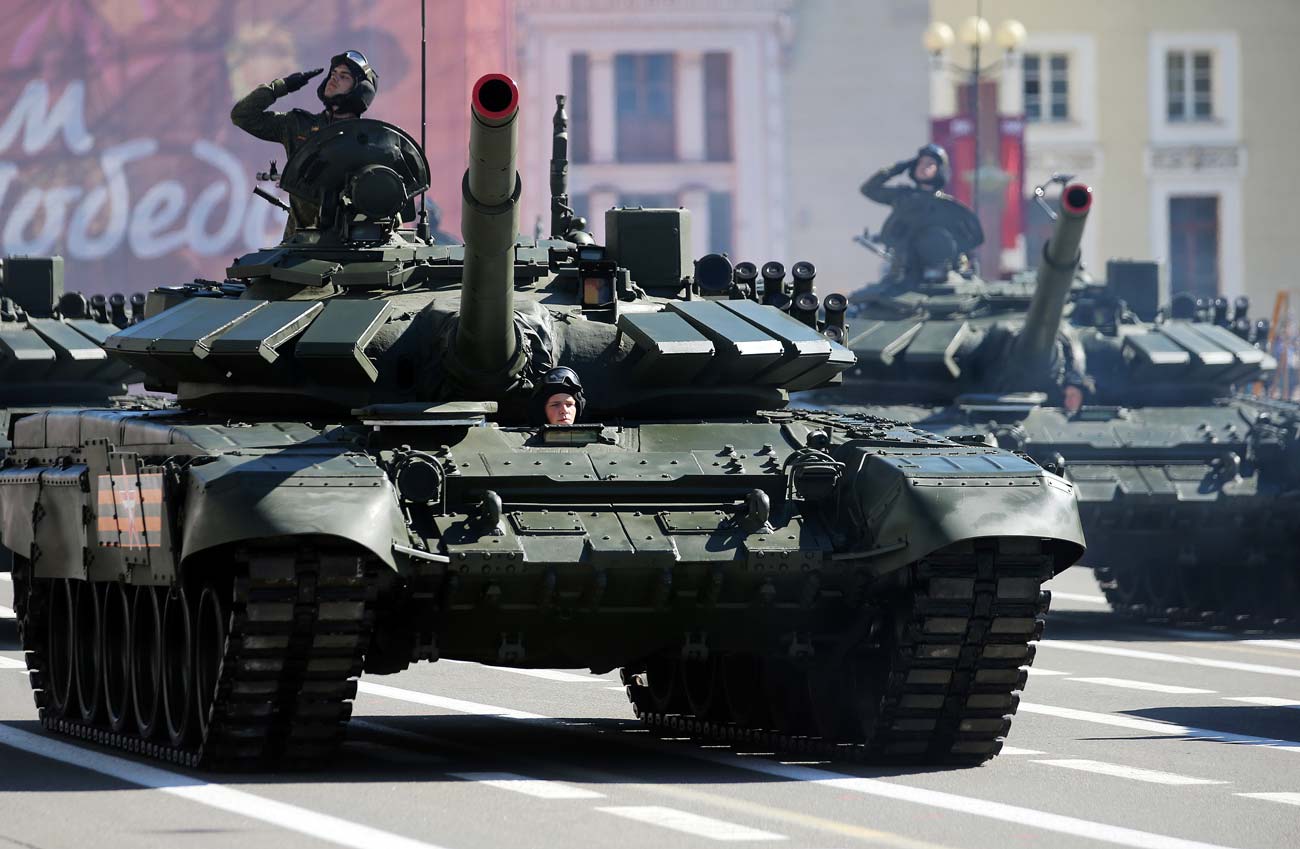 T-72B3 tanks drive on Dvortsovaya Square in St. Petersburg during the final practice of the military parade marking the 71st anniversary of the victory in the Great Patriotic War.

Igor Russak/RIA Novosti
Russia continued to upgrade its armed forces in 2016, with its combat strength seeing considerable improvement thanks to the appearance of modernized vehicles, vessels and aircraft. What new weapons did the army, navy and air force receive this year? Read on to find out.

The combat potential of the Russian armed forces increased by 14 percent in 2016, Russian Defense Minister Sergei Shoigu reported to President Vladimir Putin during the end-of-the year defense meeting on Dec. 22, explaining that this improved performance had helped maintain the country's defense capabilities at an appropriate level.

In turn, Putin noted that "still much needs to be done concerning the strengthening of the nuclear triad and the perfection of the Missile Attack Warning System…. intelligence and communications systems must also be perfected."

Putin set an objective that by 2021 the share of modern technology in the armed forces must be no less than 70 percent and sanctions for not fulfilling contracts must be as strict as possible.

In the Far East, the military group on the Kuril Islands (some of which are claimed by Japan) was given Bal and Bastino coastal missile systems and the group in Kamchatka received the Pantsir-S1 anti-aircraft artillery system.

The Russian Navy was supplied with 24 ships in 2016, with the Black Sea Fleet receiving the lion’s share of the new ships and submarines.

Among the vessels are two Project 636.3 diesel-electric submarines, the Veliky Novgorod and the Kolpino. These submarines contain the Kalibr high-precision missile attack system, which is used for firing at sea and ground targets, as well as modernized avionics.

The submarines can launch the Kalibr-PL missiles, which have successfully proven themselves in Syria, from their torpedo tubes at a distance of almost 950 miles (around 1,500 kilometers). The missiles are capable of striking within several meters of the target.

The Russian Navy has also received more than 100 Kalibr and Onix anti-ship missiles.

The air force was also presented with modernized Tu-160M and Tu-95MS strategic bombers. The Helicopters of Russia Holding Company supplied the armed forces with shipments of Mi-28N, Ka-52 and Mi-35M helicopters, as well as Mi-26 heavy military transportation helicopters.

According to First Deputy Commander of the Russian Aerospace Forces Lieutenant General Pavel Kurachenko, by 2018 the aerospace forces intend "to create a closed radar field for the ground Missile Attack Warning System and begin deploying elements of the system for countering space systems, which is equipped with weapons based on new physical principles."

The Russian army’s ground forces have acquired 2,930 new and modernized weapon models, while 22,000 communication devices and 260 unmanned aerial vehicles have been delivered to the troops. A total of 36 drone aviation military units and divisions have been formed: The army will have more than 600 systems with 2,000 drones, including the new Orlan-10 and Eleron-3.

This article has been abridged. The full version in Russian can be read in Russian at TASS

Read more: Russia expands its presence in the Arctic>>>