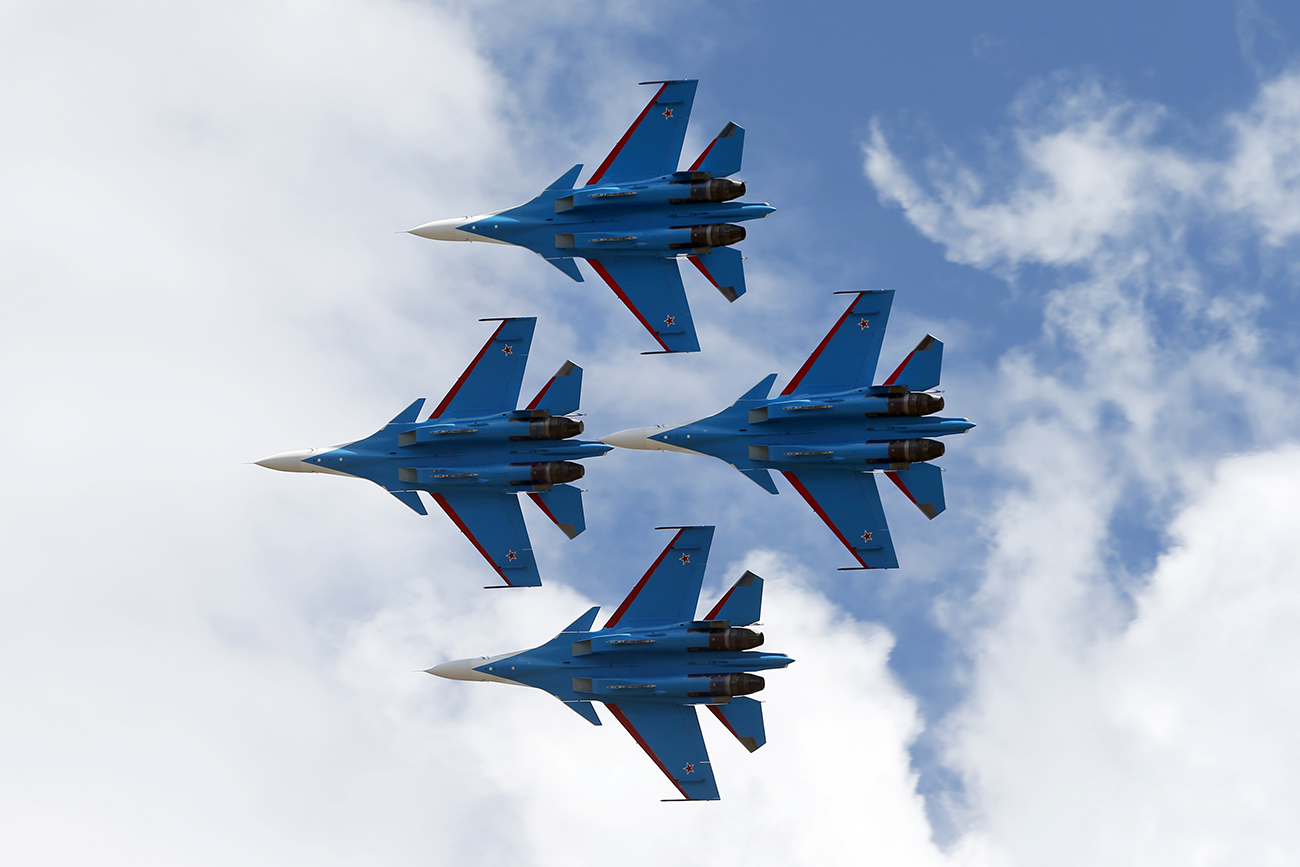 Marina Lystseva/TASS
The new Russian fighter's super-agility makes it an excellent aircraft for dog fights. Russia hopes to sell it to Indonesia, Algeria, and the Middle East.

The plane can stop dramatically in mid-air, turn on a dime, and rapidly accelerate. The Russian Knights, the elite aerobatic demonstration team of the Russian Air Force, is showcasing the new Sukhoi Su-30 fighters at the LIMA 2017 maritime and aerospace exhibition in Malaysia, March 21-25.

Why is the Knights' new plane so unique?

The Su-30 is considered one of the best multirole fighters in the world, and has significantly better combat potential and performance characteristics than the baseline Su-27, which the Russian Knights previously flew.

The Su-30 is also the first super-agile fighter jet, with a highly efficient integrated aerodynamic configuration, thrust-vectoring AL-31FP engines, and all-moving canards. Pilots say this gives the plane an edge in close combat.

“The Su-30MKI is the world's first export fighter fitted with an active phased-array radar, which allows for detecting, tracking, and engaging a large number of targets simultaneously,” said Valery Averyanov, a test pilot with the Su-30’s manufacturer, Irkut Corporation.

The Su-30 is also the first Russian fighter with open-architecture avionics.

“This considerably simplifies subsequent upgrades and allows for customizing the aircraft to suit the specific needs of each individual customer,” said Averyanov, adding that the fighter's super-agility gives it an edge in dogfights. “It allows the pilot to maneuver actively and safely and use the weapons faster than the enemy,” he said.

“Why the Su-30SM and not the Su-35, when the two aircraft are essentially similar? The Su-30SM is a twin-seater, which is more convenient and comfortable for pilots. During long flights, one will be flying the plane and the other will handle navigation,” Lt. General Andrey Yudin, commander of the Russian Air Force and deputy commander of the Russian Aerospace Forces, told TASS news agency.

Pavel Bulat, who heads the International Laboratory of Mechanics and Energy Systems at St. Petersburg's ITMO University, said the Russian Knights came to Malaysia to demonstrate the fighter's capabilities to potential foreign customers.

“Russia wants to sell the Su-30MK to the Middle East, Indonesia, and Algeria,” Bulat said. “The Russian Knights are performing aerial displays for potential customers of Irkut Corporation and [state-controlled arms exporter] Rosoboronexport.”

The Su-30's primary rival is France's Dassault Rafale, which has a better active phased array than the Su-30MK.

“These fighters have comparable combat potential, but the price of the French aircraft is twice that of the Su-30, and Dassault never transfers associated technology to foreign customers,” Bulat noted. “Besides, the Rafale is a light fighter, whereas the Su-30 is a heavy aircraft with a range of 3,600 miles.”