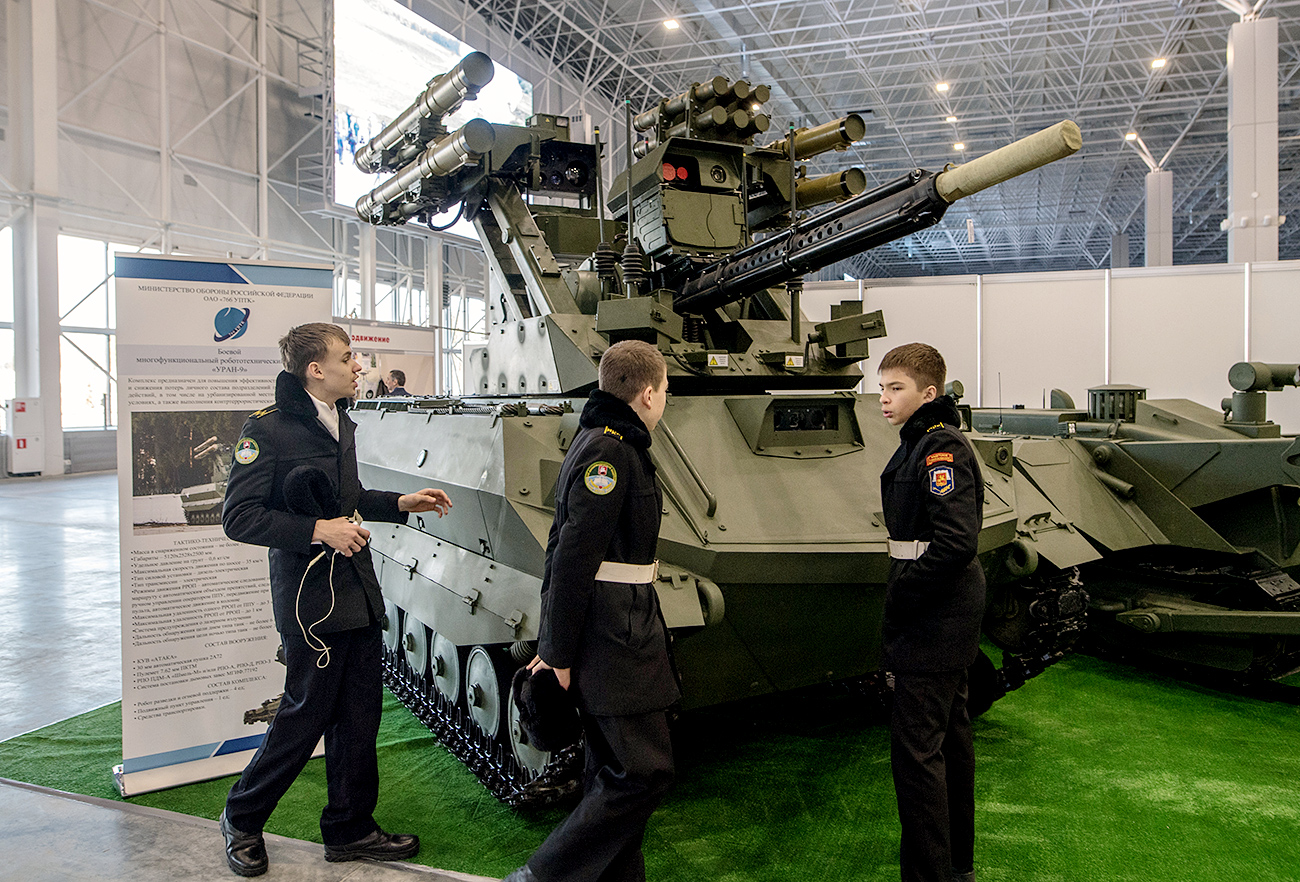 Uran 9 fighting multi-purpose robotics complex at the exhibition during the Robotization of the Russian Armed Forces 2nd Military & Scientific Conference at Patriot Congress and Exhibition Center.

Iliya Pitalev/RIA Novosti
The Uran-9 unmanned ground vehicle (UGV) will be put through its paces in Syria before the first systems are delivered to customers in India, Vietnam, Algeria and elsewhere.

The Russian military-industrial complex is preparing to market the new Uran-9 UGV. The vehicle is best described as a remote-control caterpillar-track robot or, more simply, a land-based drone.

The Uran-9 is intended to provide fire cover for infantry, carry out ground reconnaissance and protect military facilities. Thanks to its highly versatile Ataka and Igla missile systems, the UGV is able to destroy hostile low-flying aircraft and take out light armored vehicles and enemy fortifications.

However, the new vehicle is only the first step in the field of military robotics. Engineers in Russia and around the world still face a number of hurdles before the technology is integrated into all types of heavy weaponry.

“The main problem with all robotic systems is the need for remote control. The system cannot take decisions for itself on the battlefield, so if the satellite link is broken because the vehicle is hit by a projectile, it will go ‘offline’,” Dmitry Safonov, a military analyst for Izvestia, told RBTH.

In his expert opinion, the UVG can operate in a range of environments, including mountains, forest and compact urban areas, etc. That said, during testing the main focus was on the impact of electronic warfare (EW) systems, which, in simple terms, are capable of disabling the vehicle on the battlefield.

“It’s a well-known fact that Russia is using Syria as a testing ground for all its modern weapons and equipment. And it’s no secret that various prototype weapons have been combat-tested against ISIS with a view to further development and modification.  I don’t rule out the possibility that the Uran-9 will also be tested in a live environment under the impact of enemy EW systems,” said Viktor Murakhovsky, editor-in-chief of the magazine Arsenal Otechestva (“Arsenal of the Fatherland”).

Experts are keen to stress that the first UGVs are no match for tanks or infantry fighting vehicles in terms of fire power. They are not battle-winners by themselves—robotic vehicles will save the lives of special forces personnel, but the human factor will continue to swing the outcome of wars and military operations.

“The guiding principle is ‘the worse, the better.’ The more flaws revealed in the experimental prototypes in real combat conditions, the more lives will be saved in future,” adds Safonov.

The basic version of the Uran-9 comes equipped with a 2A72 30-mm autocannon and a 7.62-mm machine gun. The rate of fire is 350-400 rounds per minute.As mentioned, the UVG’s armory includes 9S120 Ataka anti-tank guided missiles and 9K33 Igla anti-aircraft missiles. Both weapons systems can hit enemy targets at a range of up to 5 km. What’s more, the robot can be equipped with various types of additional weaponry, say the developers.