Infrared and invisibility: Russia’s new tanks top up on technology 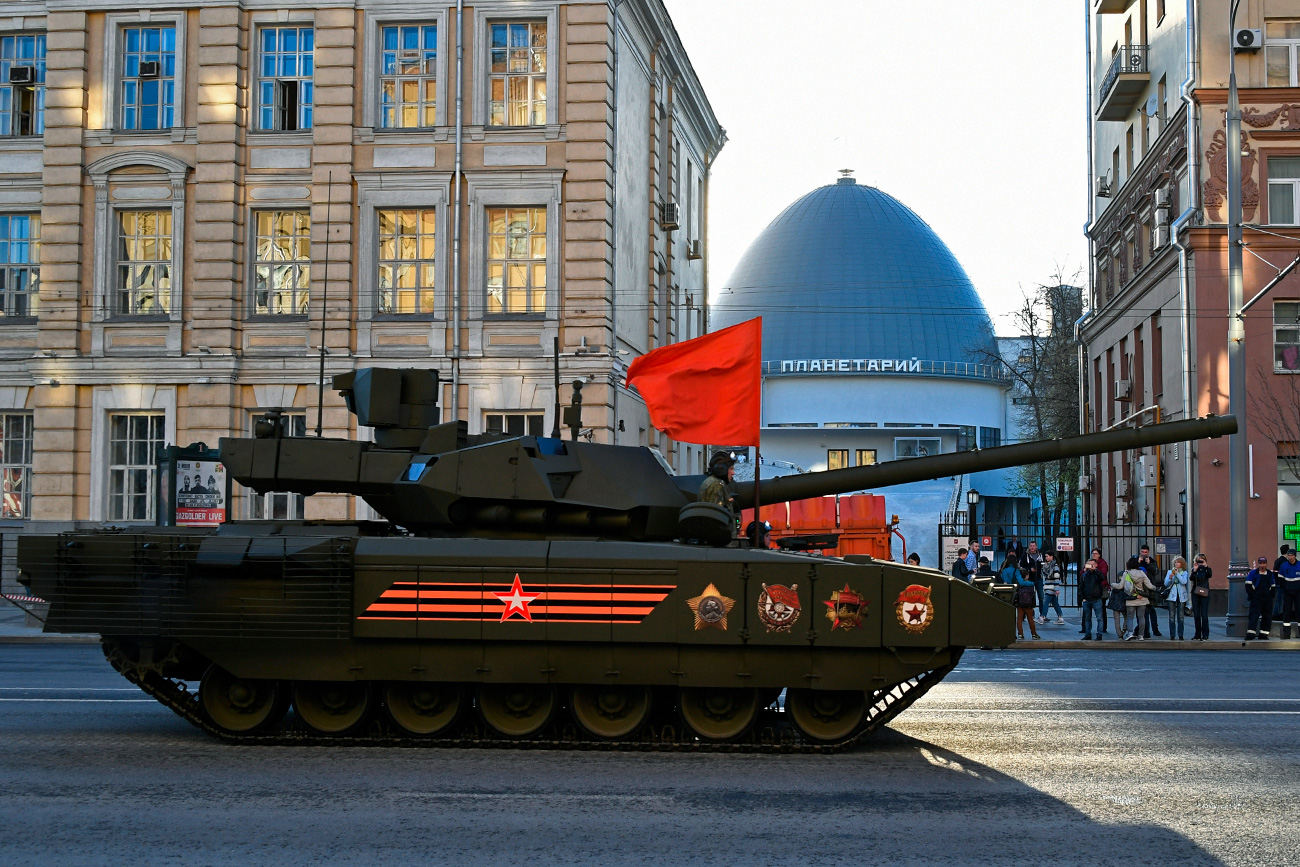 T-14 Armata's thermal image in the lens of the infrared camera is extremely dim - the only element of the vehicle that shows up brightly is the small opening of the engine's exhaust system.

Maxim Blinov/RIA Novosti
Russia's tanks are not just being upgraded with new armor and stealth capabilities, the country's military hardware is being beefed up with a new set of revolutionary solutions with multiple elements - all of which is setting Moscow's military apart from the West.

A bystander at the May 9 Victory Day parade on Red Square filmed the military hardware rumbling past using a smartphone with a thermal imaging camera attachment and posted the film online. The shots revealed the heat signature of the most up-to-date T-14 Armata tanks, the modernized T-72B3 tank, the Kurganets-25 and BMP-3 infantry fighting vehicles, the Bumerang and Rakushka-M armored personnel carriers, the latest Koalitsiya-SV 152-mm self-propelled gun, and the Taifun-K and Tigr-M armored vehicles.

As expected, there was nothing miraculous about the results. Almost all the hardware "showed up" on the film to a greater or lesser degree. At the same time, the differences in "luminance" between machines designed according to "classic" models and their modern counterparts was plain to see.

A glance at the T-72B3 tank, the BMP-3 infantry fighting vehicle, the Taifun-K and Tigr-M armored vehicles, and the Buk-M2U and Pantsir-S air defense missile systems makes it clear that the heat trail of the running engines, transmission systems, and wheels within their caterpillar tracks would betray the presence of this weaponry on the battlefield at a distance of a dozen kilometers.

And that means they could not only be detected using a thermal imager, but also targeted with modern anti-tank missiles - for instance, the American FGM-148 Javelin, which is manufactured by the Raytheon and Lockheed Martin factory. It’s the world's first series-produced "fire-and-forget" anti-tank missile system with an IIR-type infrared target-seeker.

The Javelin would be powerless, however, in any encounter with the T-14 Armata. Its thermal image in the lens of the infrared camera was extremely dim - the only element of the vehicle that showed up brightly was the small opening of the engine's exhaust system.

This fully confirmed the words of Vyacheslav Khalitov, deputy chief executive officer of the Uralvagonzavod scientific-industrial complex, who said that the new Russian tank would include stealth technology. Radar-absorbent materials and a special exterior coating will make the tank difficult to detect at night in the infrared band, while the "chiselled forms" of the turret will absorb radar illumination. This is exactly what happens with the new-generation F-22 Raptor and T-50 aircraft.

A masking mantle named Mantiya has been specially developed for the T-14. It is a loose covering combining the functions of the radar-absorbing masking material Nakidka and slat armor to counter shaped-charge warheads, providing protection against high-precision anti-tank weapons and close combat weapons such as hand-held anti-tank grenade launchers. 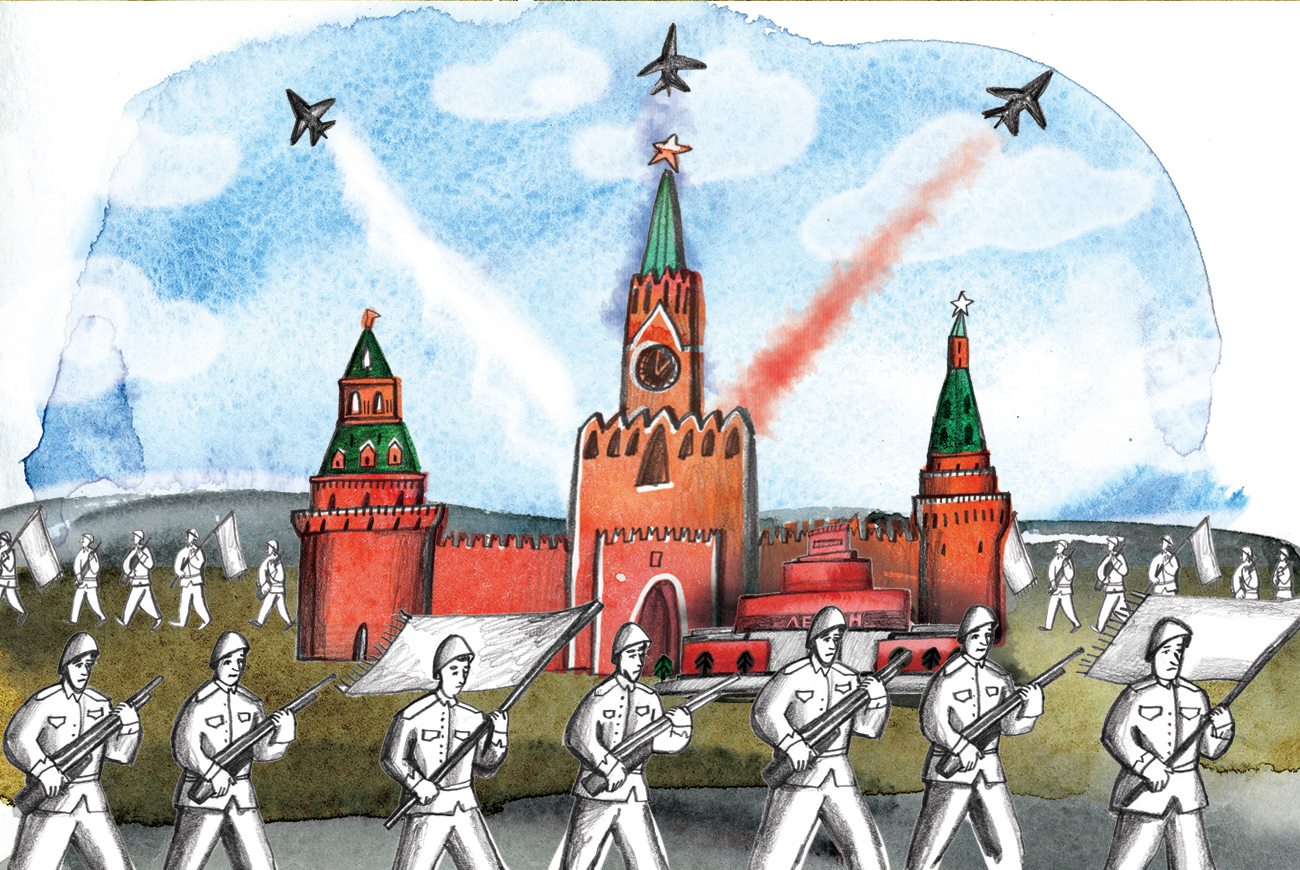 Why Russians hold the Victory Day Parade every year

The principle of the Mantiya is quite straightforward - it’s used to cover a tank, infantry fighting vehicle or other armored hardware. The structure of the Mantiya has been developed on a triple defense principle. It absorbs waves, repelling and at the same time scattering them, thus effectively reducing detection of the moving object. The thermal signature of the functioning engines is reduced to background level, so one is blurred with the other. As a result the vehicle stops being visible to the Javelin's homing warheads or any other missiles that use thermal detection to hit targets.

How is the T-14 different from advanced Western tanks?

Comparing the T-14 with its Western counterparts, designers speak of a 25-30 percent advantage over the American Abrams tank, France's Leclerc tank and Germany's Leopard 2. The tank's outstanding feature is its unmanned turret: The crew operates equipment by remote control from an isolated armored capsule. It has a new 1,500 hp diesel engine and is fitted with the new 125-mm 2A82 cannon. Representatives of the manufacturer note its unique multi-layered composite armor.

Vehicles of the Armata series have UV direction finders which use ionized aerial engine trails to detect projectiles and missiles. On the basis of incoming data, the tank's Afghanit active defense system can bring down a target with a special projectile or hit it with its large-caliber machine-gun. According to the developers, the latest direction finders can detect not just UV radiation from the actual target, but also passing missiles and projectiles, as well as the flash of explosions. Because of this, the operation of the system is not hindered by various types of natural interference, and it can distinguish dangerous targets from harmless ones with a high degree of accuracy.

At the same time, according to experts interviewed by RBTH, all these combat features of the T-14 Armata still need to be confirmed in real battlefield conditions.