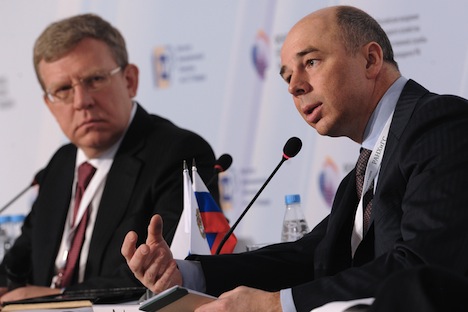 From left: Aleksei Kudrin, chairman of the board of trustees of the Gaidar Institute for Economic Policy, and Anton Siluanov, Russia's minister of finance, at the Gaidar Forum 2013 'Russia and the World: Challenges of Integration'. Source: RIA Novost

The Gaidar Forum opened in Moscow on Jan. 16, immediately tackling the basic problem of Russian economic policy: the ratio of economic stimulus to government spending.

Addressing the forum, Prime Minister Dmitry Medvedev stated that the government's main objective is to secure economic growth of at least 5 percent of GDP per year.

Forum participants have little doubt that 3.5-4 percent GDP growth in 2013 is achievable and that the extra 1.5 percent can be attained from structural reforms. Opponents, however, believing that the additional growth is hidden in the stimulus package, voiced their concerns outside the forum.

Sustained economic growth of at least 5 percent is the main goal of Russia’s current government.

The new target, set against a backdrop of slower growth, was issued by Prime Minister Dmitry Medvedev during his speech at the Gaidar Forum — the first event of the year that traditionally brings together government officials and independent experts.

The end of 2013 does not represent a deadline for achieving this 5 percent growth, and the time frame was defined more broadly as somewhere "in the near future."

Medvedev focused attention on the activity of state corporations. According to him, these corporations have played a role in the consolidation of disparate assets, and their fate must be governed by certain rules.

As an alternative to supporting state-owned corporations, the prime minister proposed a policy of stimulating private enterprise — small, medium, and large. To this end, Medvedev believes that regional competitiveness should be raised, in order to entice investors.

He advised that regional and municipal authorities share responsibility for the proposal with the federal government.

To enhance competition, Medvedev considers it necessary to carry out a coherent privatization plan. He did not hide his disapproval of waiting indefinitely for the market to pick up: the lack of a favorable investment climate has been used by officials to explain the sluggish sale of state assets.

His opening speech at the Gaidar Forum confirmed that, despite some changes in personnel and macroeconomic targets, the underlying conflict in the government's economic policy looks set to remain the same: increased spending to spur economic growth will run counter to macroeconomic stability.

Only the nuances of the debate have changed. Interestingly, in 2013, both approaches seem to lead to the overall goal in the medium term — 5 percent annual GDP growth.

"Natural" growth of 3.5 percent (in the absence of external shocks) is taken as a foregone conclusion by both camps. The extra 1.5 percentage points could either come from a rapid expansion of budget financing for infrastructure projects (short term) or major structural reforms (short and medium term).

The idea of economic growth through structural reform was backed by Finance Minister Anton Siluanov. He underscored, however, that reform meant just that: reform, not an increase in public demand.

The Ministry of Finance's position is also supported by the Central Bank of Russia. According to the first deputy chairman of the Central Bank, Alexei Ulyukaev, the 3.5 percent growth seen in 2012 is the objective feasibility of the current economic model.

Efforts to stimulate this simple model through easing monetary policy were described by a Central Bank spokesperson as "counterproductive" and "not conducive to economic growth, but rather an imbalance and the accumulation of new risks in different segments of the economy."

In general, the Gaidar Forum is more of a platform for supporters of this idea, which is why Deputy Minister of Economy Andrei Klepach chose to voice his opposing view elsewhere. In his opinion, growth that is 5 percent of the GDP requires adjustments to the budget rules.

It is unlikely that the minister had in mind a tightening of policy, since the Ministry of Economy has consistently lobbied for more government spending to spur GDP growth.

Klepach also disagrees with the opinion of Alexei Ulyukaev on the correspondence between current growth and economic potential, although he sees the easing of monetary policy as an acceptable way of stimulating GDP growth.

It is clear that, in 2013, a stable global economy will favor supporters of increased government spending; meanwhile, their opponents' success depends largely on the external shocks that hit the government in 2008-2012.