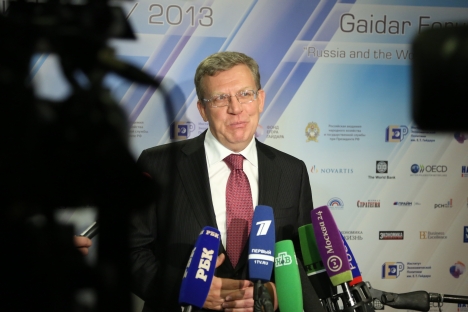 Augusto López-Claros, director of global indicators and analysis with the World Bank Group, argues that it will require political will on the part of the Russian government to move Russia higher up in the World Bank’s Doing Business rating.

Russia has made some progress in improving its business climate, moving up in the World Bank’s Doing Business rating; yet the country can do more, provided it pursues a consistent policy. This was the point of view stated by Augusto López-Claros, director of global indicators and analysis with the World Bank Group, at a conference that was part of the Gaidar Forum in Moscow.

“Russia has made some progress and has improved its standing in this rating, this signifying that reforms are moving in the right direction,” said López-Claros.

He added that the World Bank praised those efforts. López-Claros noted the Russian government’s ambitious goal of rising to the 20th spot on the list, even though the country still sits closer to the bottom in the rankings.

Russia has improved its position in the Doing Business 2013 rating (up to 112th from 120th), occupying a place between Palau and El Salvador. The global rating covers 185 countries: Singapore has gained the top spot for the seventh year in a row, followed by Hong Kong, New Zealand, the United States, Denmark, Norway, the United Kingdom, South Korea, Georgia, and Australia.

Successful improvement of the investment climate (and, hence, a rise by Russia in the World Bank’s Doing Business rating) will require political will, consistent actions, and making progress, López-Claros noted. He added that this was not an impossible task.

“Naturally, this will require a consistent policy. But we see that the country has made progress in improving its investment climate in recent years,” the analyst said.

López-Claros pointed out that Russia’s position in the rating depends not only on its own success but also on the policies pursued by other countries.

“Indeed, if you run fast but the others run even faster, you’ll fall behind,” said López-Claros.

Commenting on the investment climate, the World Bank representative mentioned that investors were looking for manpower that was not only cheap but also skilled; at the same time, investors pay a lot of attention to the institutional environment and choose places where “rules are reasonable, transparent, well-formulated, and predictable.”

López-Claros also noted the global changes simultaneously taking place in this direction in all countries over the last few years.

According to López-Claros, the World Bank sees good dynamics in Central and Eastern Europe, including Russia. The expert advised focusing on fostering competition in transportation, improving education and fighting corruption.