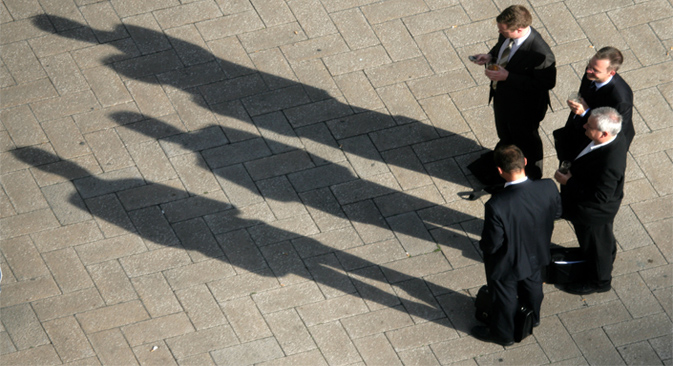 “We, officials, don’t know how to communicate with investors,” Belyakov said, explaining the government’s decision.

Under a memorandum signed with the Economic Development Ministry and the Russian Direct Investment Fund, Goldman Sachs will promote Russia’s contacts with international rating agencies, help organize roadshows, and bring together Russian officials with investors to improve the perception abroad of Russia's investment climate.

President Vladimir Putin ordered the government last year to improve Russia’s ranking in the World Bank’s Doing Business Index from 120th in 2011 to 20th by 2018. In the latest study published by the World Bank in October, Russia had climbed eight places to 112th.

The image-polishing drive will not be just a substitute for efforts to improve Russia’s investment climate, as these processes should go hand in hand, Belyakov said.

Goldman Sachs Investment Banking Managing Director Sergei Arsenyev said one thing he would recommend is for the Russian government to make its work more open.

“The government and key departments, ministries and key officials should be open for dialog with investors. It seems to me that this is what was missing and this is what we hear very often,” he said

Goldman Sachs has a long history of involvement with the Russian government, starting with the early reforms under Prime Minister Yegor Gaidar and his “shock therapy” reforms in 1992.

Leonid Grigoryev, Deputy Economics Minister and chairman of the government's foreign investment commission, told the Los Angeles Times in early 1992 that Goldman Sachs will be “a new force inside the country working on the side of the Russian government,” adding the bank would also advise the government in dealings with the West and help protect Russian interests in negotiations.

“We want to attract serious Western business investment in Russia and speed up the country's economic transformation,” he said then.

The bank pulled out of Russia after the 1998 financial crisis, the New York Times reported, but returned in the mid-2000s alongside most of their major competitors.