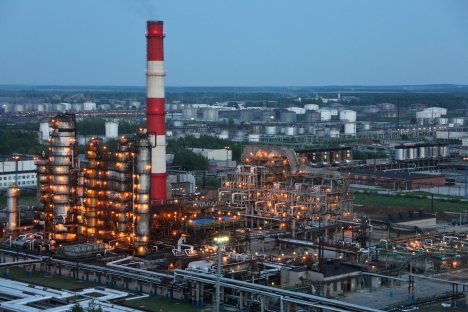 India’s energy demand is expected to more than double by 2035, from about 700 million tonnes of oil at present to around 1.5 billion tonnes. Source: ITAR-TASS

The Indian oil and gas bellwether is reportedly planning to focus on Imperial’s operations only in a few oil fields with the purpose of reducing losses.

ONGC Videsh Ltd (OVL), the overseas investment arm of the state-owned Oil & Natural Gas Corporation (ONGC) has announced plans to cut Siberian oil production operated by Imperial Energy in Russia’s Tomsk region by 17.4 percent to 512,900 tonnes, in 2013. The planned reduction of the Imperial’s oil production has once again signalled that the company’s long-standing problems in the spheres of exploration and production are unlikely to be resolved anytime soon.

ONGC Videsh, which manages the overseas assets of ONGC, said in a statement on January 17 that Imperial’s production in Russia fell 21.4 percent in 2012 to 621,100 tonnes and was 2.3 percent below the target.

OVL had acquired the UK-listed Imperial Energy Corporation Plc for $2.1 billion in January 2009, after Russian anti-trust watchdog, the Federal Anti-Monopoly Service (FAS), cleared the deal in what was to be its first acquisition of a foreign exploration and production company with significant assets. The company invested another about $500 million in the asset.

However, its all-along falling oil production has seriously impacted India’s efforts to reduce its dependence on the imports of oil and gas, which OVL claimed as its main objective of the Imperial acquisition. India’s energy demand is expected to more than double by 2035, from about 700 million tonnes of oil at present to around 1.5 billion tonnes. Now ONGC is reportedly planning to focus on Imperial’s operations only in a few oil fields with the purpose of reducing the losses.

Imperial Energy operates mainly in the rough terrains of Tomsk region in Western Siberia. Production is currently under way at the Festivalny, Kyiv-Yegansky and Maysky sections, which has continuously been falling, creating problems for the OVL to urgently take measures to halt the declining output by the company.

“The general reduction of the oil production scopes is related to search for optimal and economically feasible technologies of oil recovery from tough reservoirs,” Imperial said in its statement.

“The management team of Imperial Energy plans to find cutting-edge technologies and, together with the technology partners, to launch pilot projects for development of Bazhenov shale, which holds great production potential,” it added.

According to experts, Bazhenov shale is believed to be more developed in the licensed blocks under the Imperial Energy. Last year, Russia introduced amendments to a draft law aimed at levying zero mineral extraction tax concerning with the oil extracted from the Bazhenov deposits. The company wanted to utilize this tax concession to reduce the cost of exploitation of oil deposits at the Bazhenov.

“Imperial Energy Group hopes that in 2013, the government will take a decision to release the users from paying mineral extraction tax for production of mineral deposits from tough reservoirs. All these actions will allow us to increase our Group's oil production volumes in future,” the company stressed.

Immediately after the Imperial’s acquisition, OVL made investments to boost production from 8,000 barrels per day (bpd) to 32,000 bpd by 2011-12 against the estimated target of 80,000 bpd by 2012-13. However, experts say, the oil production may fall up to 6,000 bpd from the current production of 10,000 bpd, as most of the wells are not drilled. Except for a marginal improvement in production from 16,000 bpd in mid-2010 to 19,000 bpd, Imperial's troubles continue till date and there is no hope of raising the production in the foreseeable future.

Apparently, according to experts, the targets for the OVL, could hardly be achieved, in view of the declining production from oil fields in the Tomsk region.

Industry analysts here said the OVL had no idea of tough reservoirs before it started work on the projects in the Western Siberia. It only came to know about the tough reservoirs when the projects team faced tight rocks while working through the drilling. “Tough reservoirs require a different innovative technology, not a conventional one, which is not suitable to the tight terrains in the Tomsk region,” they noted.

In order to cope with the tough reservoirs, OVL is currently going through the process of experimenting and acquiring new technology to explore tight rocks. The company recently expressed the hope that following the finalization of the new technology soon, the oil production by the Imperial will substantially rise.

As of now, ONGC has ruled out options for any major investments in the Siberian oil fields until it found a suitable technology to deal with the tough terrains in the Tomsk region.

The company also claimed, in addition to the technical issues, Russia’s stringent tax regime does not leave much net back value for substantial capital investments. Therefore, it does not want to invest any more in drilling new wells and tapping untapped reserves until tax problems are also resolved.

It blamed the steep tax structure for the low returns, with Imperial’s net realization after paying all taxes and duties just $19-20 per barrel at an oil price of $90-100. This low net return comes from the Imperial’s exploratory and production efforts in the harsh geological and climatic conditions of Siberia, from where a meagre 13,803 barrels per day of output is transported through 5,000 kilometres of pipelines. According to ONGC, this can hardly cover the operational cost.

India raised the issue with Moscow last year, pressing Russia to give tax concessions to Imperial Energy and had hoped to resolve it in its favour ahead of Russian President Vladimir Putin to New Delhi, in December. However, the Russian side rejected India’s proposal for tax concessions to make up for the exorbitantly high cost of oil production from tight reservoirs in Western Siberia due to tough terrain, extremely cold climatic conditions and high tax rates.

Russia has also not included the Imperial oil fields in the list of the fields allowing a reduced rate of export customs duty on the produced oil. Analysts say Russia may grant some concessions to the company in form of rebates that it may be planning, in general, for the drilling of tight oil reservoirs.

As things stand today when the ONGC has not been able yet to formulate a suitable strategy to restore the company’s targeted peak production of oil and turn it into a profitable enterprise, the Imperial Energy has become a liability for the OVL in the Western Siberia, with a very bleak prospect of making profits to justify its acquisition.