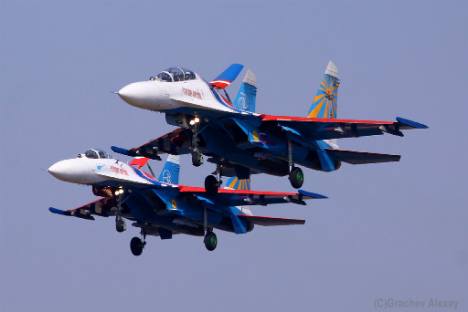 The 9th International Exhibition on Aerospace, Defence & Civil Aviation Aero India 2013 opens on February 6 in the Bangalore suburb of Yelahanka. The exhibition, which is scheduled to end on February 11, is traditionally the largest air show in Asia, with contemporary military engineering and weapons, as well combat support systems, on display. The show will be attended by high-profile defence industry companies, as well as representatives from the armed forces of nearly all the leading nations.

Russian aerobatics groups Russkie vityazi and Strizhi will make their maiden appearances at the Indian air show. They will showcase the most complicated aerobatic manoeuvres in Su-27 and MiG-29 combat fighters that never fail to amaze guests at air shows around the world. Aero India 2013 will be their first show of 2013. The Russian pilots will demonstrate the renowned Big Diamond formation, which has entered the Guinness Book of World Records.

Above the traffic jams

Members of the sidelined elite

The Russian delegation has several surprises in store for the show. Almaz-Antey will display its world-famous Tor-M2KM short-range air defence missile system. Unlike the Tor-M1 and Tor-M2 systems – the tracked and wheeled versions – the Tor-M2KM is an autonomous module that can be mounted on any platform to provide air defence for Army units, as well as the Air Force and the Navy. It offers protection against air attacks on strategic and high-priority military and civil targets.

The Tor-M2KM combat module is an autonomous combat unit comprising radar and optical devices, special equipment, air defence guided missiles, primary and backup power sources and the combat crew. The unit uses a special hull with uniform mounting attachments, which allows the Tor-M2KM to be mounted on a wheeled chassis, semitrailer, trailer, or other platforms, including a railway car or a ship. Moreover, weighing in at just 15 tonnes, it can be lifted by the Mi-26T helicopter and transported to any hard-to-reach spot. The unit can be deployed in mountainous areas and on roofs, where the enemy will probably not think to look for it, nor expect to be locked on and engaged by a guided missile.

The developers of the Tor-M2KM at Izhevsk electromechanical plant Kupol, which is part of Almaz-Antey, claim that the combat performance of the air-defence complex is automatic; the human controller only chooses the target out of the list proposed by the machine and pushes the Launch button. The air-defence guided missile automatically homes onto the target and detonates the warhead in the kill point. The 14-kilogramme payload contains fragments of complex shapes produced from a special tungsten, nickel and iron alloy, ensuring a superb piercing performance and virtually eliminating the possibility of ricochets. The developers insist that the Tor-M2KM shows a very high probability of destroying all types of air targets. This is due to the fact that it demonstrates small errors in the kill point, it can adapt the radio fuse to the type of air target and it carries a special warhead payload. The system only requires a crew of two, which will naturally make it very popular with the guests and hosts of Aero India 2013.

Almaz-Antey is taking models, posters and videos of about 20 air defence systems to India. These include: the long-range S-300VM (the Antey-2500) anti-ballistic missile system, which is capable of engaging air and ballistic targets at distances of up to 350 kilometres; the medium-range Buk-M2E missile system developed by the Tikhomirov Scientific Research Institute; automatic control systems; radar stations; and maintenance and diagnostic equipment.

The Indian market for air defence solutions is saturated and Russian makers are up against a fierce competition. But experts believe that the Russian-made air defence systems are quite competitive. Therefore, if Delhi wishes to update its systems, it will have a broad choice, but it is unlikely that there will be any system as cheap and effective as the Russian solutions.

The MiG-29K/KUB pilot training system for the carrier-based multirole combat aircraft is expected to cause a stir at Aero India 2013. Delhi has acquired 20 MiG-29K aircraft for its INS Vikramaditya, which will soon complete the final stage of repairs at the Severodvinsk-based shipyard. They are expected to be handed over to the Indian Navy in late 2013. The fighters are being delivered to India, and naval pilots will need to be properly trained. The Indian military has recently placed another order for more than 20 of these aircraft. However, with no pilot training systems – such as Ukraine’s NITKA training system, which is located in Saki near Sevastopol, or cockpit models and engine mock-ups – training becomes an increasingly difficult and expensive task.

In order to reduce the material and financial burden and make it easier for naval pilots to master the plane, specialists at the Mikoyan design bureau have created a special training system – the MiG-29K/KUB – where the entire flight process is displayed on 3D screens starting the engine, taking off from the aircraft carrier, performing combat missions and landing on the carrier (which is considered to be the most difficult task). Those who have had a chance to sit in the pilot’s seat of the MiG-29K/KUB (and the system can train two pilots simultaneously) claim that the process is so real that you can feel the machine shaking before takeoff; your body responds to the g-loads caused by the sophisticated air manoeuvres during bombing runs, head-on battles, missile launches, and you can see the marks on the landing deck so that you know when to drop the speed to zero, release the hook and use the brake parachute.

MiG experts are certain that their training system will be very popular with the guests at Aero India 2013. More importantly, they believe it will be in demand from Indian naval aviation experts and pilots.

There will be no full-scale operating models of Russian machines at the Bangalore expo, except for the fighters piloted by Russkie vityazi and Strizhi. The Russians see no reason why they should take more machines with them: nearly all of the planes operated by the Indian Air Force are Russian-made, and there will be more than enough of them at Yelahanka to show the entire range of Russian combat aircraft that is offered to potential buyers. And India is more than just a buyer.

“Our relationship with India has de-facto shifted from a seller-purchaser paradigm to one where latest technology is created jointly. We have successfully completed the first phase of working out the conceptual design of the fifth generation fighter,” Rosoboronexport deputy general director and head of the combined delegations of Rostec and OAO Rosoboronexport Viktor Komardin told reporters. “The work on the multirole transport aircraft is coming along according to schedule. We also have the BrahMos supersonic cruise missile, which the Indian side is planning to integrate into the Russian aviation complex [the Su-30MKI – VL]. It is in association with Russia that India is working on exclusive and mutually beneficial projects, which has a very simple explanation: only Russia can offer India contemporary military technology.”

Komardin promised that these projects would be addressed in Bangalore. Furthermore, the air show will feature discussions on the modernisation effort to upgrade nearly all of the Su-30MKI components. Another important topic for discussion is for Russia to implement the offset programmes included in the broad framework of cooperation with Indian partners. The two countries also need to address the outlook for promoting programmes of this kind in the military and technical sector.

India is also expected to make its decision soon on Rosoboronexport’s bid in the tender to supply 197 reconnaissance helicopters. The Russian proposal is unique, because the multirole Ka-226T helicopter is capable of performing the entire range of tasks mentioned in the Indian tender documents. Also, the Russian bid is very attractive for the Indian manufacturing sector, for it incorporates an offset programme.

Overall, the Russian delegation will have a very busy agenda in Bangalore. Given that Russian President Vladimir Putin, his Indian counterpart Pranab Mukherjee and Indian Prime Minister Manmohan Singh underlined the need to further advance a particularly privileged strategic partnership between Russia and India in all major areas – including the military and technical sector – at a meeting in December 2012, Aero India 2013 will provide new powerful impetus to the successful relationship between the two countries in this field.